Here at PBW, I don't have a committee of literary experts to tell me what to read. With good friends to recommend books, writer weblogs to check out the talent, and the terrific variety of genre fiction in general, why would I need one?

Furthermore, I don't mind talking about what I'm reading, but why should I tell you people what to read? You've got friends, weblogs, bookstores, and brains, don't you?

That was the status quo, until an editor sent me this book, which I had three weeks to read and consider for a quote. I've only done this a couple of times, and I usually end up regretting it, but I would walk barefoot over broken glass for this particular editor, so I said I'd take a look.

The day the book arrived I read one page. I admit, to see how bad it was. Then I read another page, and another, and then the chapter, because it wasn't bad, it was great. Another chapter, and I realized it was better than great, it was kick-ass. Somewhere around chapter three the world went away and I forgot to make dinner and the house could have burned down and it wouldn't have mattered, because by then the Black Dagger Brotherhood owned me, and I wasn't putting the book aside for anything.

The hell with quotes and blurbs; some books are just too damn good to keep to yourself. That's why I'm backing this book, Dark Lover, a novel of the Black Dagger Brotherhood, by J.R. Ward. 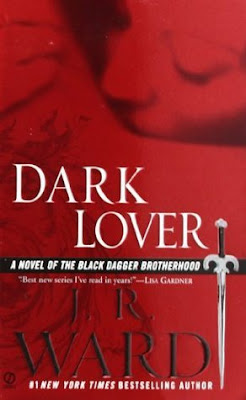 The basic premise: Wrath is the last purebred vampire on the planet. Caught up in a turf war with inhuman slayers bent on exterminating his kind, he fights alongside his warrior brothers, the Black Dagger Brotherhood, as the last defenders of their race. When one of his most trusted fighters is killed, Wrath discovers the dead man left behind an unprotected, half-human daughter who is unaware of her heritage. Wrath has no choice but to go after Beth Randall and bring her into the world of the undead -- by any means necessary.

I've been trying to think of how to describe Dark Lover. It's going to be called a lot of things. Dark erotica, you bet. Vampire/paranormal romance, absolutely. But J.R. Ward is not like anyone else who's already out there writing it. She's got her own unique voice, and it's so clear and strong that it grabs a reader right away. You can't slap a label on someone who writes like this.

There were so many things about the book that impressed me from the writer's perspective, too: the tone; close attention to detail; flawless pacing; the clean, uncluttered writing; plus the drama, the fun, the scary parts, and the terrific romance. What I loved most was the style of this book. You can't fake style; you've either got it or you don't.

Dark Lover is J.R. Ward's debut novel for Signet Eclipse, and will be coming to bookstores nationwide in early September; ISBN#0-451-21695-4; you can pre-order it from Amazon.com here.
Posted by the author at 1:26 AM