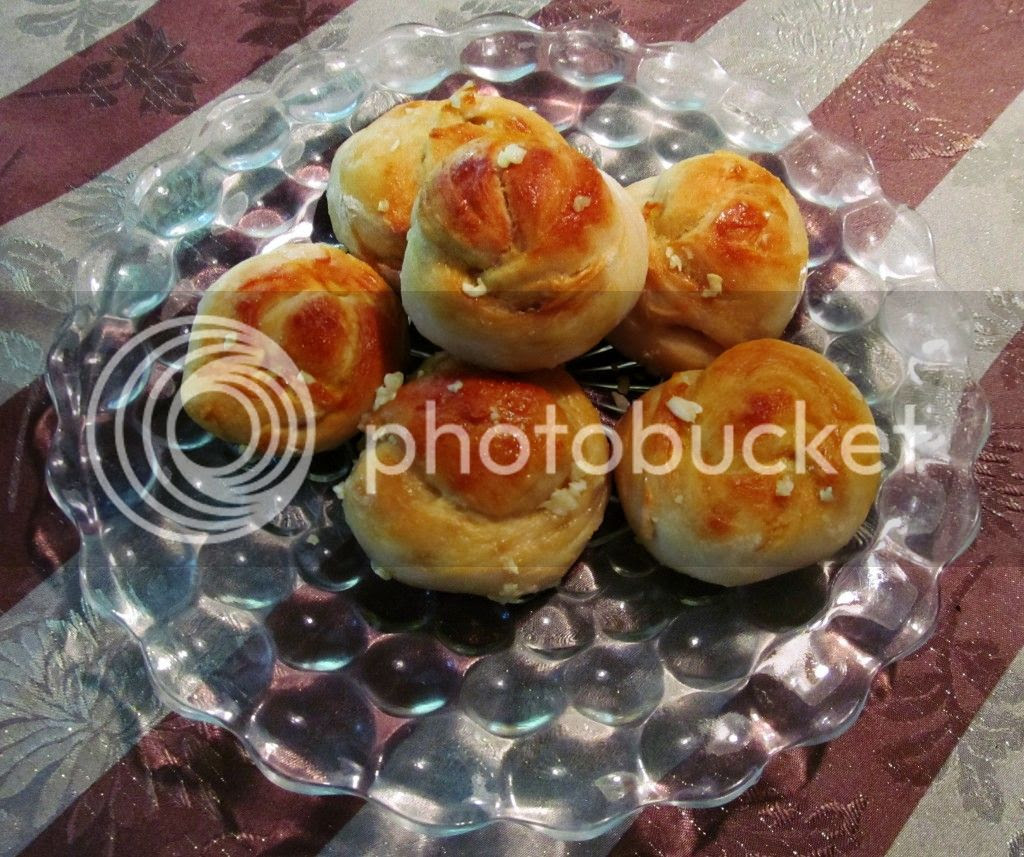 My guy could never be a vampire; he loves garlic too much. One of his favorite things in the world are those lovely knotted rolls you get at good Italian restaurants. He especially likes the rolls at one local place, which they serve drizzled with olive oil and topped off with chopped raw garlic.

Because I like making my guy happy, I've been trying for years to find the equivalent of those rolls that I could make at home with my Italian meals. I've tried jazzing up my own rolls, rolls from the bakery and frozen garlic knots (which are pretty awful no matter what you do with them) but no luck. Nothing tasted as hot, fresh or light as the rolls from his favorite restaurant.

I don't give up that easy; I'm the daughter of a chef, and while I'm never going to win a bake-off I'm a pretty decent bread maker. I felt certain I could figure out the recipe, I thought, by experimenting until I got it right.

I knew by taste that the rolls were made with yeast, so my first attempts were all variations on yeast roll recipes from various cookbooks. Some were too dense, some were too sweet, and none of them had the right texture. The dough needed to be light but chewy, almost like a good bagel, so I moved on to bagel dough recipes. That didn't work. I then tried to make them based on recipes for Italian bread, homemade pretzels and even my mother's fried dough cakes, but no luck there, either.

I was close to driving myself crazy over these rolls when I thought of something: the restaurant that made my guy's favorite garlic rolls also did a big business in take-out pizza. A lot of pizza meant a lot of dough -- and good pizza crust is made with yeast. If they wanted to save time, they'd probably use some of their pizza dough for their rolls instead of another, different recipe.

It seemed almost too stupid to be right, but I was pretty sure I was onto something, so I made a batch of my homemade pizza dough, cut it into strips, rolled it into knots, and baked them. They came out so close to the restaurant's rolls that after one bite I nearly fell on the floor. They were using pizza dough. Despite my success the rolls still weren't quite right; they didn't have that correct crispness to the crust, and the garlic in my olive oil drizzle seemed mushy.

I talked about the recipe with my daughter, who took a culinary class in school last year, and she suggested I use an egg wash on the rolls to improve the crust (and that worked.) Then I tried different ways to prepare and add the chopped garlic, all of which failed to replicate the restaurant's version. It ended up being too chunky, too soggy, too crunchy or too mushy. I was too close to give up, so by trial and error I discovered that if I waited to chop the garlic (in the food processor) a minute before the rolls were finished baking, and added it to the rolls after applying the olive oil drizzle, it worked.

Now my guy can have his favorite rolls whenever he likes, no restaurant required. I know it seems like a silly thing to spend so much time puzzling out, but you don't know how happy these rolls make my man. He practically kisses my feet every time I set a basket of them on the table.

Of course, I could have saved myself a year of trial and error baking by asking one of the people at the restaurant to tell me how they make their rolls; we're such regular customers I'm pretty sure they would have given me at least the general idea. Or I might have searched online until I found the exact right recipe for garlic knots and copied that. There's nothing wrong with either of those options; they certainly would have eliminated a lot of mistakes and failed batches of rolls.

That also would have taken all the fun out of it, and I wouldn't have learned things like egg wash is great for making crisper crust on bread (thank you, daughter), or that garlic is better chopped than crushed. Even while taste-testing different types of garlic while I was involved in this experiment, I found out that Mexican-grown variety is a little too bitter for my taste, and the elephant variety (which has huge cloves) is kind of bland.

It's also given me an infusion of assurance that I didn't have before; I really don't have my Dad's gift with food so I've always been more of a by-the-book cook. I've adapted existing recipes, but I've never invented one from scratch on my own. Now that I've done this, I think I'll be open to experimenting more often.

There's one more bonus I got out of this cooking experiment: I'll never tell my guy this, but I like my garlic knots better than the ones we get at the restaurant. This is because I know exactly what goes into them, my ingredients are all-natural and healthy, and they're made with love. How can any restaurant top that?

With writing, most everyone develops their own creative process based on what they're taught, what they read in books and what they imitate. None of these are wrong; whatever helps you to learn and improve your art is a good thing. But every now and then, it doesn't hurt to figure it out on your own. It may take longer, and you may fail several times, but you'll also learn, and eventually you will find the way to make it work. And that will be your way, not someone else's, and that will instill a sense of confidence that no teacher or book can ever give you.
Posted by the author at 12:00 AM