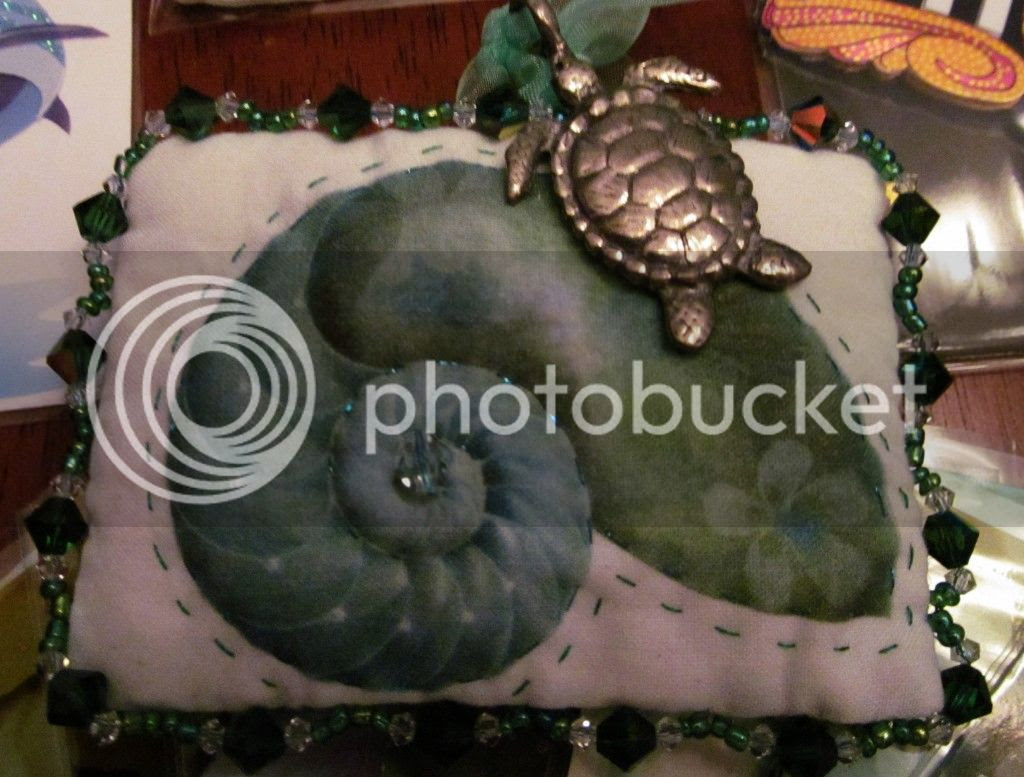 I made this little pouch while working on my 1000 Cards Project this past week. The nautilus image was one I scanned, shrank and recolorized from a crazy quilt beading book; the other parts of the pouch were made from some fabric scraps and leftover beads from other projects. I didn't think of what to put inside the pouch until it was finished, and then made a BookLoop with a pewter turtle pendant. The entire project took twelve hours to make from my starting idea to the finished piece. Which seems like a long time, considering that it's artist trading card-size (2.5" X 3.5").

While I was working on this one the thread snarled a few times, and snapped once. The beading on the outer edge isn't bridged right in a few places, and I had a devil of a time getting the edges to line up when I was forming the pouch because I'd eyeballed the seams instead of properly measuring them. When I got (understandably) impatient with it, I accidentally rammed the end of one of the holding pins into my index finger.

At that point I said a lot of bad words over it, and I had to wear a bandaid for the last couple of hours I worked so I wouldn't bleed on it. When it was done I felt a little like I'd put myself through a wringer backwards, but I'd learned a few things, too: 1) sew with 12" of holographic Sulky rather than my usual 18", 2) don't use it in areas where I'll need to pull the thread hard, 3) plan out the entire piece first, not just the initial concept, and 4) get off my lazy backside when I'm cutting and use a ruler instead of my obviously not-too-dependable eyeballs. 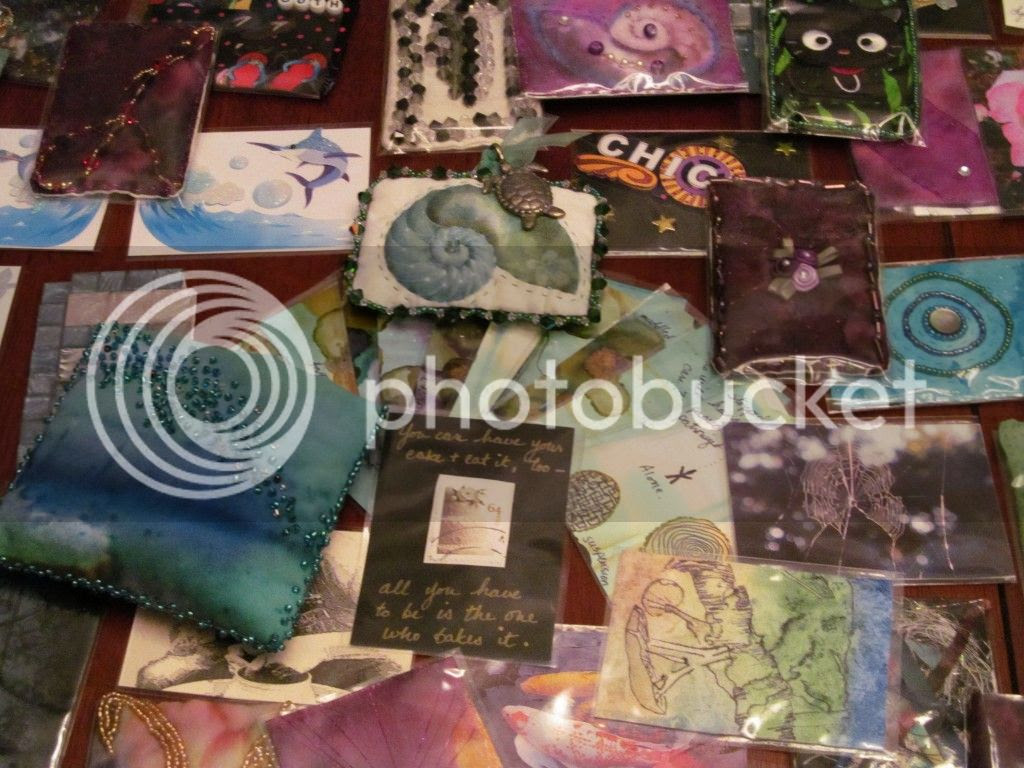 Despite my one shortcut it probably sounds like a lot of time and effort for such a small piece, and in fact it was. In the time I spent making this one ATC I probably could have knocked out ten or twenty simpler designs. Sure, I could have used the sewing machine instead of doing all the work by hand. I also might have hot-glued the beads on instead of sewing them in place. But for me this project has never been about doing it the easy/fast/simple way, or getting a huge quantity of work done in a short amount of time. I want to learn from this experience, but more importantly, I want to give it my best. Some days I do make a lot of cards because the idea is simpler to execute; but other cards take me days, even weeks to complete.

As with writing or any creative endeavor, when you're so focused on what's in front of you, you can forget the big picture. You can become discouraged by what the day's work demands of you. I can't tell you how many times I've felt too tired, too drained, too inadequate to even think about this project. For most of the year I haven't been concentrating on anything but one piece at a time, although once a month I take a photo of what I finished to post to the photoblog. Sometimes that gives me a boost, but it never seems like much. Back in May I took a couple weeks off and didn't make a thing, which put me seriously behind my production schedule. I needed the time away, and I don't regret it, but it hurt the project. When I started back up I had to do so knowing that even if I work my ass off for the rest of the year, I might not reach the finish line.

So why keep doing it? I don't know. I'm stubborn, I guess. No, I think it's mainly that I like to finish what I start. Actually, I'm pretty obnoxious about it. 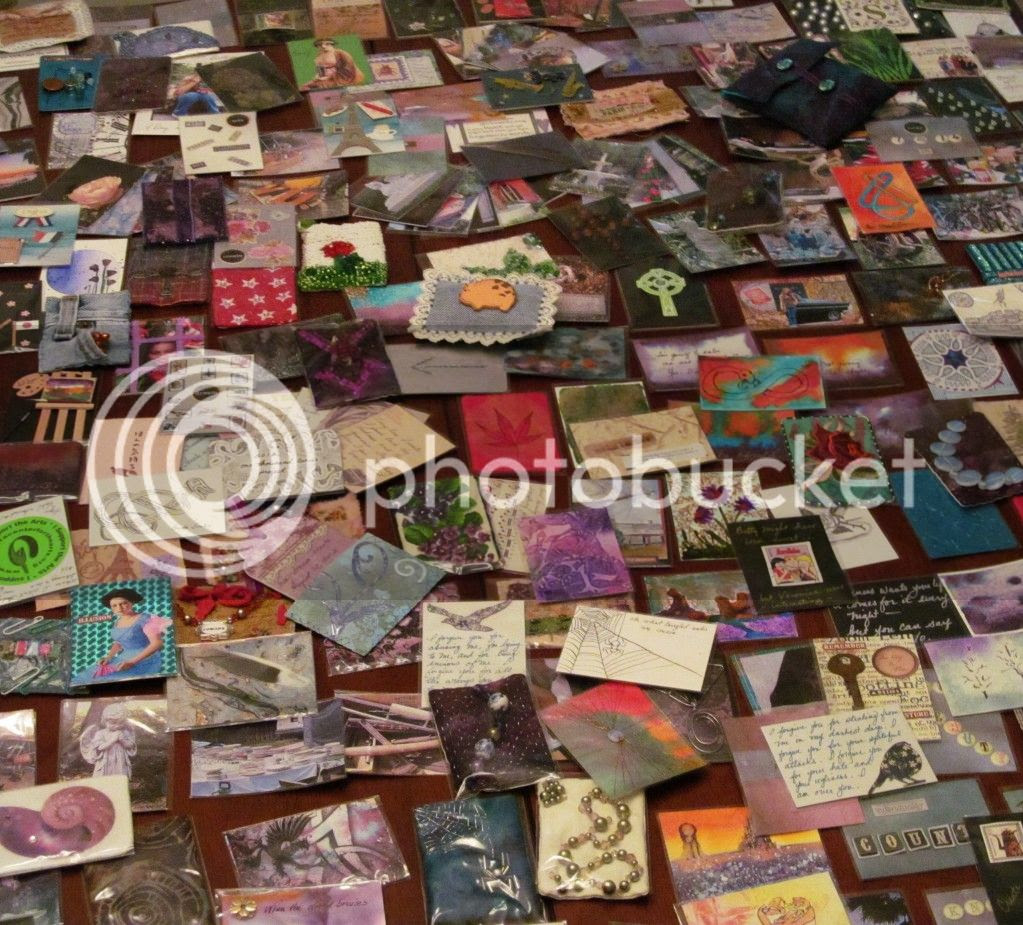 Finally I reached the halfway point, and some time today I will make my 500th card. I wanted this one to be significant, but I sort of blanked on how I could make it that way. Then I realized I hadn't really looked at what I've accomplished so far, not the entire shebang, so I started unloading the storage chest where I've been keeping the finished cards to spread them out on the dining room table (and honestly I didn't think I'd have enough finished cards to cover the top of it.)

I've been so busy with the work, and my writing, and my life that I've forgotten about a lot of the cards I've made. As I sorted them out, I rediscovered some of the moments from this past year that inspired bits of this project: the wonderful time we spent celebrating my daughter's birthday; the quilt show I attended last Spring; a cool technique I invented during my art class. There were bleak moments in the cards, too: my very painful jaw surgery, dealing with the loss of my dad, the heartbreak of hearing that Monica Jackson had passed away. It was all there, in the cards, and as I was revisiting them I ran out of dining room table and had to start creatively repiling them.

I didn't realize how much work I've done, either. There were lots of photographs and quilted cards, along with experiments that failed, and ideas that blossomed. A few of the cards made me laugh out loud; some made my eyes sting. And they just kept coming out of the box, more and more until I finally put down the last one. All five hundred, right there in front of me, and I looked at what has become more than a year-long art project. I looked at what I've done, and I saw not just what I can do, but what I will do -- five hundred more of these:

With writing I'm always nagging you all to focus on organizing and planning and getting the words down on the page every day. I know I've warned you not to backtrack. Once in a while, however, it's good to make a pit stop and take a hard look at all of what you've accomplished. It's important to have that sense of where you've been, and how it's brought you to where you are. Maybe never more so than in those moments when the finish line seems so far away.

My project may not be finished this year, but I will finish it. I won't look at the cards again until I have completed the 1000th ATC. I don't need to. I'm halfway there. Now that I've seen what I've done, I know I can do the rest.