Although technically my new novel After Midnight is being released nationwide on May 8th, it's already shipping from online retailers and making it into the bookstores, so I'm going to do a little promo this week to get the ball rolling.

After Midnight is also special for a lot of reasons, some of which I'd like to share. So here are:

Ten Things About After Midnight by Lynn Viehl 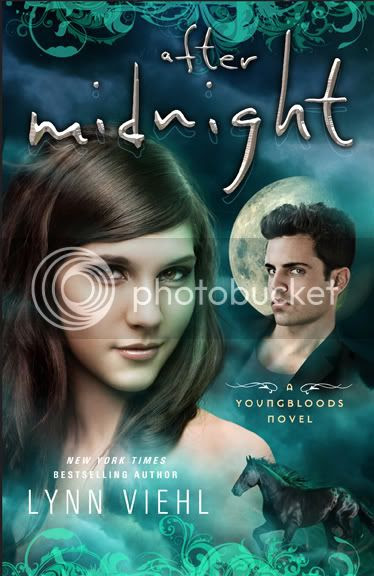 Blame the Kid: This novel was in response to something my daughter said a few years ago; she complained that I never wrote anything that was age-appropriate for her and her friends to read. She was right, so I set out to try.

E-book Compulsion: I never planned to write Dark of Heart, the free companion/parallel novella e-book that I just released, and that is set in the same universe. When I finished the manuscript for After Midnight a secondary character named Kari Carson became stuck in my head and wouldn't leave me alone until I wrote her story.

Experts: I worked with a terrific group of teenagers who helped me shape the story by providing me with first-hand knowledge, brain-storming, story discussion, critiquing and editing. They corrected my mistakes and never once complained once about the ten thousand questions I asked them.

Firsts: After Midnight is my first official YA novel, the first book in a new trilogy, and also the first time I've ever published in trade paperback with an independent publisher.

Lost Lake: The town of Lost Lake from the novel does not exist, but is a conglomeration based on a number of small Central Florida communities that I know and love. I also used a few elements from my childhood hometown in South Florida.

Not the First: You never know how obscure you are until you start writing in a new genre. Almost all of the interviewers and bloggers who have contacted me about the book assumed that After Midnight was my first novel. I realized this when I started answering e-mail questions like "How does it feel to become a published author?" and "Are you planning to making writing a career?"

Revisiting High School: I loathed being in high school, high school kids, high school teachers, etc. -- isn't that a prerequisite for being a writer? -- so the prospect of writing about that part of life in that kind of setting worried me. Once I got into the story, though, I actually enjoyed revisiting (and at some points reinventing) the experience. You still couldn't pay me to be a teenager again, but in the end I think it was good for me.

Title: The original/working title was Midnight Meeting, which I first spotted in an Emily Dickinson poem and encountered again as a Gaias Pendulum song title. That all felt a bit too heavy for the story, so I went through the manuscript gathering keywords, bumped into the phrase after midnight and went with that.

True to Life: All of the horses in the book are based on real-life counterparts I have met and/or that my daughter has ridden. Their names have been changed, however, so that no over-zealous fans try to find their barns and sneak into their stalls for an autograph.

Worldbuilding: I haven't built a brand-new universe or moved into a new genre since 2004, so I really had fun with this one. I also found it to be a serious challenge, and in the process gained a lot of respect for YA as a genre.
Posted by the author at 12:00 AM