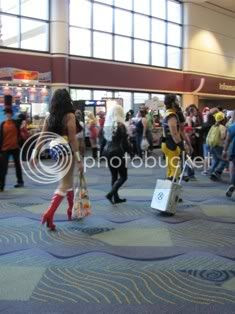 When I was a teenager I remember frequently mystifying my mother with the fads and fashions of my generation. Usually she'd say something negative about them, i.e. "A normal girl don't need a ring to show what mood she's in, or shoes strapped to four-inch blocks, or a skirt with a screwed-up hem that she has to wrap around her butt like a bandage."

Mom was also convinced that my love of heavy metal would result in me making the jump from wearing Love's Rain Scent to shooting heroin, the hair that was always "hanging in my eyes" would eventually cause me to go blind, and my piercings would automatically inform any decent boy that I was forever doomed to be a hussy.

Mom, you were wrong. I'm only wearing trifocals, and I've never once shot heroin.

Why it was so difficult for my mother to bridge the thirty-year generation gap between us was a mystery to me, until I went to MegaCon, and discovered that I am in imminent danger of turning into her.

I didn't realize I was so out of touch with the younger generation. The whole time I was at the con I saw maybe a dozen things I recognized; mostly guys dressed up as Batman, Superman, Captain America, the old-school superheroes. There weren't many of them. About two-thirds of the attendees were dressed up like manga and anime characters -- in what my daughter calls cosplay. 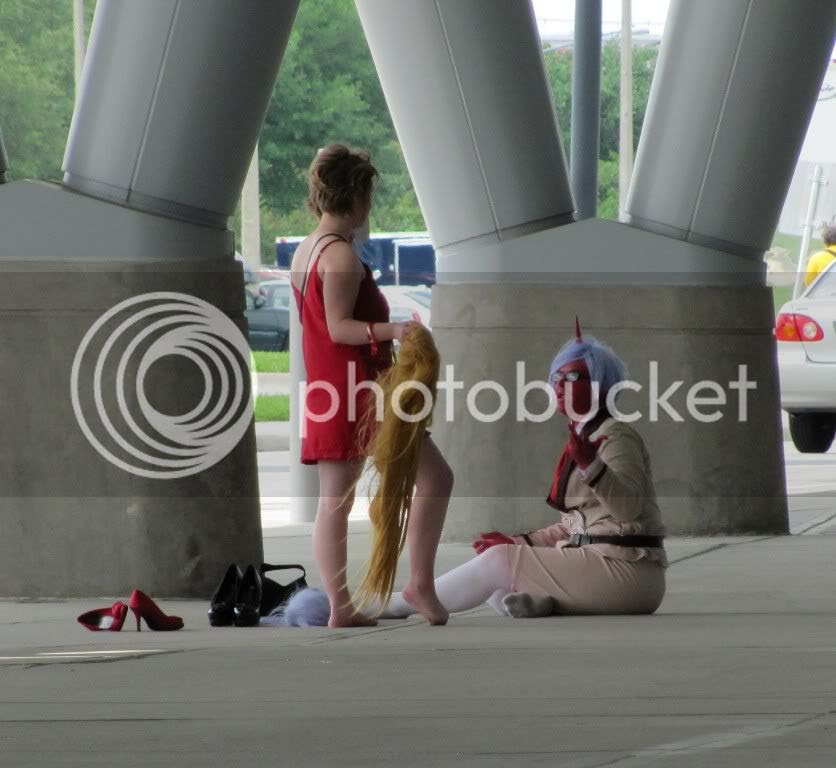 Most of the cosplayers wore wigs in unnatural hair colors (green, purple, orange, pink, blue) and styled them to look like I do in the morning after I go to sleep with damp hair. Evidently bedhead is all the rage. Their costumes were mostly homemade from the most humble of materials: plastic housecleaning gloves, rain boots, cardboard, vaccuum hoses, pvc pipe, etc. Lots of spray paint, too. The outfits reminded me of the Halloween costumes we used to make when I was a kid because we were too poor to afford the store-bought variety; I really enjoyed seeing how cleverly this generation put them together. Way better than our stuff.

Prices for tickets (which we didn't buy in advance because no one could decide which day they wanted to go until the last minute) were $25.00/day, which I thought given the size of the convention was reasonable, and while there were long lines for the ticket booths they moved quickly. Issuing armbands that once put on were almost impossible to take off was smart, too, although I did spot some kids letting other, un-armbanded attendees into the con area through some exit doors.

I associate comic books and cartoons with children, which is wrong, I know; adults are big into this stuff now. This was not a convention geared toward young children (age 13 and under) at all, however, and a few times I even had to steer my older teens away from some very explicit stuff. I saw some costumes and behavior that weren't what I'd consider appropriate for public viewing. I'd rate the convention overall as PG-13, with many R- and even a few borderline X-rated moments. 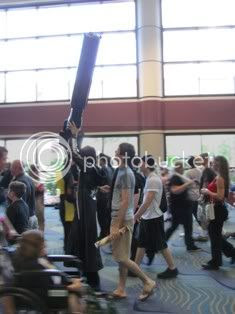 Also, every other person was carrying weapons: knives, swords, guns, rifles, you name it, they had it. I saw this guy running around with what looked like a bazooka, I swear to God. 99% of the weapons were obviously homemade, but a couple of the folks dressed in military-style uniforms were carrying what looked like the real deal. No one seemed to be checking anyone carrying the stuff that looked real, which made me a little nervous. I've seen these shooting games; I didn't want to be there if anyone went Call of Duty on the crowd.

The main activity seemed to be to either take pictures of the folks in costume, or (if you were wearing a costume) stop and pose for a picture. Every five feet someone was doing this. Occasionally it became annoying, and I thought the convention people should have an area set aside for this (and maybe they did; I didn't find it.) I found myself constantly trying not to walk into someone else's photo moment. I didn't complain, though, because the delight with which these kids showed off their costumes and assumed all these dramatic poses seemed quite genuine. 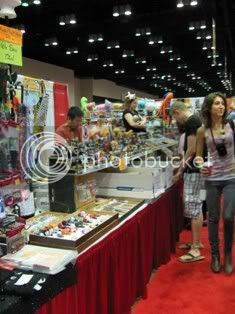 The vendors were universally great people, and most were open to bargaining or would offer great deals on multiple purchases or little extras. The gentleman at The Blonde Swan, from whom I bought a pair of steampunk goggles as a surprise for my kid, did a little something extra with the lenses for her. Everyone selling their art happily signed things for me; most offered before I asked. On average prices seemed pretty reasonable, even from the big names at the con.

I enjoyed meeting author Tracy Akers, who had a lovely setup at her table and was quite friendly. I loved Tom Fleming's and Paul Vincent's art, and they were terrific as well. Mostly I stayed in the background, though, and followed the kids around. It was more interesting to me to see what they gravitated toward, and who they spoke to, and listen to what they discussed.

The convention center suffered from some common big event problems: not enough food vendors, confusing signs, unclear check-in procedures and far too much walking distance from the parking lot. There was nowhere to stow the stuff you bought, so once I was loaded up with the kids' purchases I had to walk about two miles to put it in the car (Mom = pack mule.) A few vendors offered to hold bigger items, but I felt a drop-off/pick-up area for merchandise would have been more helpful.

The food was terrible; what I bought for me and the kids came only half-cooked, and we had to wait in line for close to an hour to pay astronomical prices for it. I was so ticked off I'm writing a letter to the parent company of the food vendor we went to so I can give them a piece of my mind about how they run their convention concessions. Since the food court area didn't have enough tables about half the customers had to sit on the floor, which is okay when you're eighteen but a bit harder on an old gray mare like me. There were also very few places to sit down anywhere at the convention, so by the time we went home my knee was singing the Ave Maria in high C.

I'd have to give one glittering gold star for the availability and condition of the restrooms. This sounds ridiculous to you youngsters, I know, but wait until you're older; this actually becomes a real issue. There had to be at least ten thousand people attending this thing, and yet every time I made a pit stop the rest rooms were tidy, fully stocked and being watched over by a convention center employee. There were also plenty of them everywhere so I never had to wait in line. Writers conferences need to take lessons in restroom management from these folks. 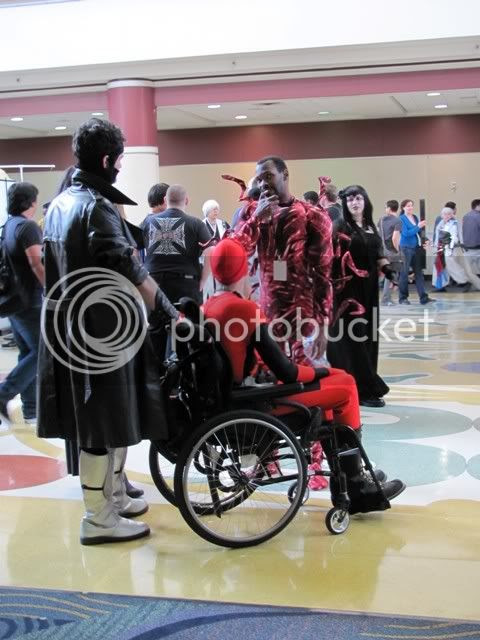 Everyone at the con gets a gold star for being remarkably polite. I'm a veteran of about a dozen writer conferences, and the repeated, lousy behavior I've witnessed at ours by comparison puts us to shame. Kids held doors for me, apologized for bumping into me and even steered me in the right direction the few times I got lost. Those who had to wait in line with me for something were patient, mannerly and didn't try to cut ahead. More than once someone told me to go ahead of them because I was ready to buy something and they were still deciding. Handicapped people were not treated like lepers, something you don't see often; the ones in costume were photographed as much as the abled. And these kids at the con were mostly older teens to young adults, who always have the worst reputation for being rude. Now maybe they were just being nice to me because I was so obviously a mother hen herding her chicks, but their manners and small kindnesses utterly charmed me. 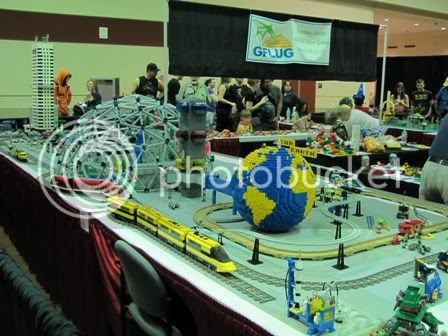 A group of Lego enthusiastists occupied one corner of the convention floor, and they had on displayed some of the coolest Lego creations and landscapes I've ever seen. A few famous folks had tables in the signing area, and I'm happy to report that Gil Gerard and James Marsters are just as handsome in real life as they are on the screen. I missed Kevin Sorbo, though, damn it, and the line to meet William Shatner was just too long (I really didn't want to leave the kids unattended for more than a few minutes, either.)

The teenagers did have a very good time, which was the most important thing to me, and are already planning their costumes for next year's convention. I think my guy will definitely have to chaperon the next one -- too much walking and standing for me -- but overall I enjoyed the experience. I do have a long list of things I'm going to look up so I know what they are or what they mean, but that's good for me, too. Any generation gap can be crossed, I think, as long as the person on the older side is willing to keep an open mind and employ their sense of wonder.
Posted by the author at 12:00 AM