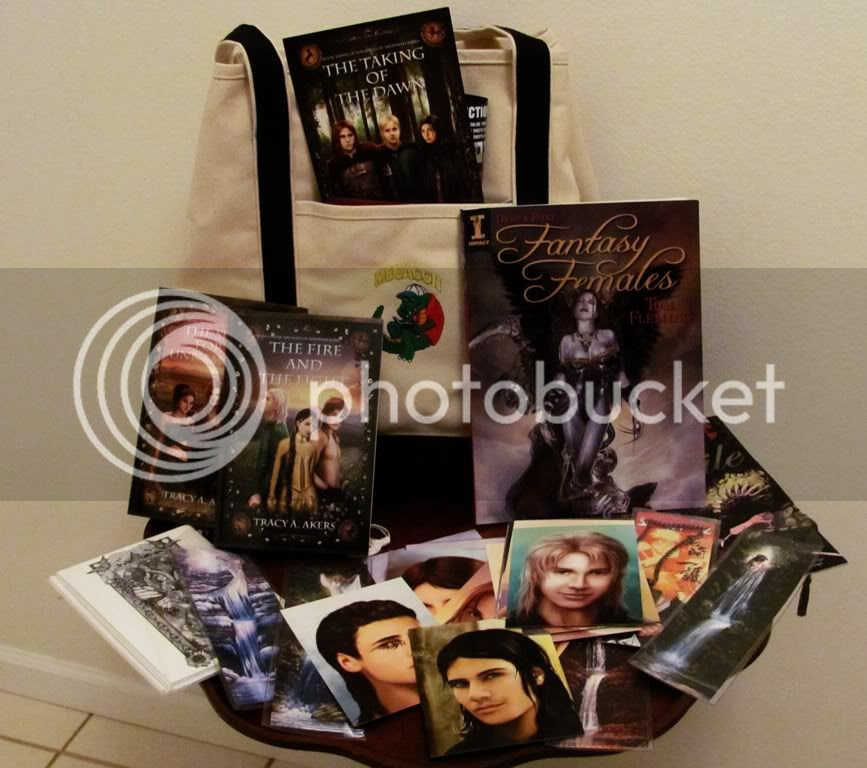 Ten Things I Brought Back from MegaCon

One large, sturdy canvas tote embroidered with the MegaCon 2011 Logo

One "Bleach" metal necklace with a portrait pendant

One artbook, Draw and Paint Fantasy Females by Tom Fleming, signed by the artist

Two YA Fantasy novels, The Fire and the Light and The Search for the Unnamed One by Tracy A. Akers. These are books one and two in her The Souls of Aredyrath series; both are signed by the author, who also included a set of sixteen absolutely fabulous character cards.

I know, technically that adds up to more than ten, but it's all going in the tote along with some freebie promo stuff I picked up. If you'd like a chance to win the whole pile, in comments to this post name the coolest thing you've ever found or seen at a conference or convention of any kind (or if you can't think of anything, just toss your name in the hat) by midnight EST on Tuesday, March 29, 2011. I will draw one name at random from everyone who participates and send the winner the MegaCon tote packed with all the goodies. This giveaway is open to everyone on the planet, even if you've won something at PBW in the past.

To see some of the photos I took at the convention, stop by my MegaCon photo album.
Posted by the author at 12:00 AM