Being a storyteller is like having telepathy; we're tuned into stuff that non-writers generally don't pick up. Things like words, images, music, dreams and life's random ephemera catch our attention and for some reason start the gears turning.

Having an extra/sixth sense is also the one major blip in our wiring that can create the most problems for us. Like telepaths we have to learn early on how to discard or block most of the unexpected inspiration that prompts story ideas, or we end up going crazy.

Sometimes you can't get rid of the prompt, and I've talked about how to manage that. I think the prompts themselves are interesting, too, because they're often very simple ordinary things that don't even register on other people's radar. Like my most recent additions to my story idea file: 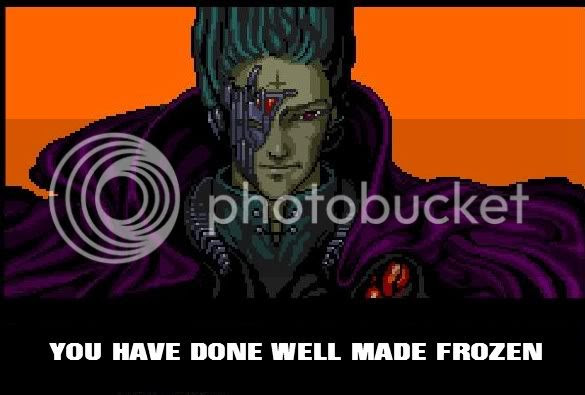 You have done well made frozen.

This rather silly phrase came to me in a dream I had a few nights ago. I was back working as a bookkeeper (yes, it was a nightmare) and going through a massive printout on old green-bar dot matrix paper. These words were printed on a sheet toward the end, and for some reason jumped out at me. They had been deliberately inserted, I realized, a threat veiled as praise, and no, I can't explain how I knew that.

Reading words in a dream fascinates me, so if I can remember them when I wake up, I always write them down.

Everything from there was like a Tom Clancy novel with me racing around trying to prevent some nameless catastrophe, but when I woke up the words are what stuck with me. They were like something someone with not a great command of English would say, i.e. the old Zero Wing joke "All your base are belong to us." It felt like a puzzle I had to figure out, though, so I kept thinking What was done well? What was frozen? until I jotted down a vague idea for a story about extraterrestrial miners drilling to tap the core of a comet and unleashing a star eater.

This was the I'm-a-person-not-a-SPAMbot verification I had to type to post a comment over on Bill Peschel's blog. At first it replayed some pop songs from my teens in my head (the Brothers Johnson's Strawberry Letter #23 and R.B. Greaves's Take a Letter, Maria, both of which I loved.) I actually bought some strawberry-scented stationery once because of the Brothers Johnson. I'm pretty sure I used it to write a love letter to my boyfriend Rob, too.

It was the seventies. We did stuff like that. What? It was romantic.

Anyway, the phrase made me jump from teen memories to a story idea that would not leave me alone. Letters have been story prompts for centuries, but e-mail has slowly turned handwritten correspondence extinct, and it's not a big stretch to imagine a day someday soon when no one writes real letters anymore . . . unless they had to keep what was in the letter protected, or confidential. Some future grim government or joyless regime might go all Fahrenheit 451 to keep that from happening, until a martyred revolutionary's letters are discovered, and smuggled out to be copied over and over and distributed. What is contained in the 24th that would (naturally) be what takes down the letter-burners.

Letter #24 would definitely have to be strawberry-scented, though. As homage, the Brothers Johnson deserve no less.

My guy jotted this down on a notepad he left on the workbench in the garage, and no doubt they relate to the available space on one of the energy management controllers he programs for his job. I have little sticky notes like this all over the house, and I'm afraid to throw them away in case they're something he needs for work.

The words Free Memory kept poking at me. What if some day our memories are taxed, or locked away, or held hostage? Would 387704 be the code that frees them? Or would citizen #387704 refuse to hand over their memories? I ended up writing down more questions than answers, but it seemed like something I'd really like to explore with story.

Words off the front of a Philips DuraMax flood light box value pack. We use the bulbs in motion sensor lights outside so that while I'm walking the pups in the dark I can see if any critters are hanging around in the yard. It's nice to know that I should get about a thousand illuminated dog walks out of these, but we really need to invest in some of the new extended-life LEDs (I'm already on a mission to replace all the old incandescent bulbs in the house with greener alternatives.)

If human beings were born with similar labeling, we'd have a world where babies came out coded with what they'd be able to do, how much it would cost and what their life expectancy is. As we continue to figure out the human genome, maybe someday we'll be able to predict some of those things while people are still in utero. But would it a good thing to know all that upfront? And what happens if someone outlives their expiration date?

You writers out there, what was one of your oddest prompts? Did you ever turn it into a story? Let us know in comments.
Posted by the author at 12:00 AM