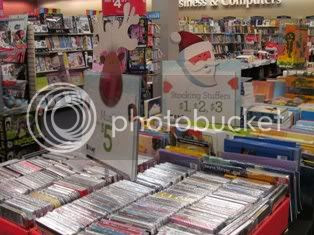 My final shopping trip for the holidays took me a few towns over to the nearest mall, where I stopped by a BAM that was twice the size of mine. The bargain tables were chock full of neat stuff, and I picked up three remaindered hardcover copies of books I wanted to read but missed them when they released: Rainwater by Sandra Brown ($6.97), Chalice by Robin McKinley ($4.97) and The Angel by Carla Neggers ($4.97).

I also raided the 2012 calendar shelves, the magazine racks and the humor section to pick out some gifts for the non-readers on my list. I am committed to making non-readers read, and I've found humor or a mag on their favorite subject usually does the trick. For those who won't read those, I get a block-type desk calendar with funny jokes or quotes on each page that I know they'll read when they're bored at work (my guy reads his Jeff Foxworthy calendar quote to me every day.) 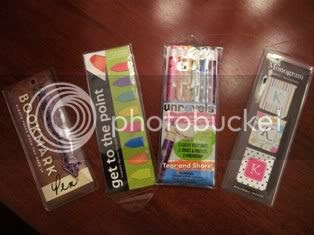 While browsing I found some new widgets at this BAM that weren't at mine:

3. Folio's set of 8 Get to the Point magnetic reusable page markers in a nice rainbow of colors ($3.99)

At this BAM I was able to put together some novel series gifts, as they keep a decent stock of backlisted titles. I find it's easier to hook people on an established series if you give them the first three novels all at once. I often stockpile extra copies of the first three books in any series I really love to save for future gifts (as well as investing in a series I want to keep reading.) Series in paperback are the most affordable, as you can buy up to three for the price of one hardcover. As gifts this year I'm giving away series by Gail Carriger, Emma Holly, Larissa Ione, Sofie Kelly, Marjorie M. Liu, Anne Stuart and Rob Thurman. 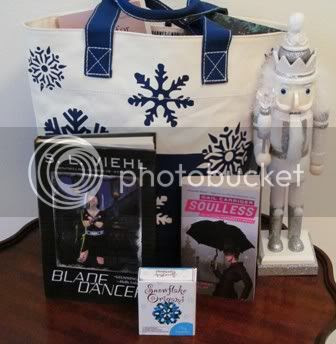 Today I'm also adding to the Let It Snow tote a now very hard-to-find hardcover copy of my SF novel Blade Dancer; Soulless, the first novel in Gail Carriger's extraordinary Victorian fantasy series; and a mini Snowflake Origami kit (they shimmer!) Two more books will also be going in the tote, and the hint for them is that they're also novels by one of the series authors I've mentioned in this post.

If you'd like a chance to win this giveaway, in comments to this post name any novel series you think would make a great gift (or if you're not into series, just toss your name in the hat.) I will draw one name at random from everyone who participates by commenting on this or any of my other Let It Snow giveaway posts from now until midnight EST on Wednesday, December 21, 2011, and send the winner the tote with all the contents. This giveaway is open to everyone on the planet, even if you've won something here at PBW in the past.

Added: Swiped this very cool heads up from Gerard over at The Presurfer: today if you go to Google's search page and type the words "let it snow" in the box, it (virtually) will snow, frost over your results and give you a chuckle.
Posted by the author at 12:00 AM