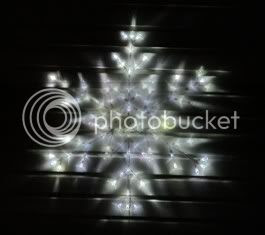 Sorry I'm late posting today; we had kind of a crazy night. After dinner a couple of proselytizers came to my door to inform me that the End is Nigh. This would be the same pair who informed me the End was Nigh last year, the year before that, and the year before that.

It's a little hard for me to take them seriously anymore, but you know, it gives us a chance to chat and catch up on how Prince of Darkness is doing, the many ways in which he walks among us, and how important it is not to be an enabler. I also know the Bible way better than they do so I can always help them find the best foreboding passages of doom, destruction and death; they're dying to get me as a guest speaker at the next End is Nigh luncheon and raffle. I also appreciate the badly-written pamphlets with pictures of cities fallen to ruin and the earth blowing apart on the covers that they give me. They're very absorbent, and I think the cat needs something funny to read while he's using the box.

Before you wag a finger at me, I get my fair share of belief grief in return. Last night while we were working on our tree, some kids crept up to the house and quietly vandalized our outdoor Christmas decorations. What they did was actually pretty funny (and easily repairable) so my guy and I laughed it off. Sometimes the spirit of the holidays means you need to be a little extra forgiving (but next time, you grinches, I'm letting out the little dog, who will happily rip your ankles to shreds.) 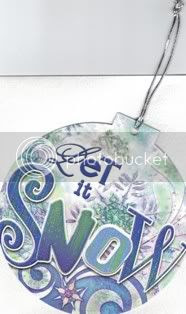 What inspires me most during the holidays is kindness in any shape or form. A smile from a tired cashier, who takes a minute to wrap your glassware in protective paper. A kid who holds the door open for you at the mall when you're carrying fifteen packages. Sometimes the smallest act of kindness can inspire others to be even more generous. The other day when I stopped by Dunkin Donuts I got to the end of the drive-thru line at the same moment a guy in a work truck did, and I let him go ahead of me. When I got to the window the girl told me that the guy in the work truck had paid for a large drink for me. That was the best cup of coffee I've had all year.

Someone (you know who you are) asked me if I named my giveaway Let It Snow because I knew Google was going to do the Let It Snow thing with their search engine. Because of course I'm psychic and could predict such a thing . . . . not. In reality it was a cool card I found at my pack-and-ship place. Someone very smart decided to design a line of greeting cards shaped like tree ornaments with strings attached so your recipient can hang them right on the tree. It's a very creative solution to displaying one's greeting cards in a festive and convenient manner. That kind of simple ingenuity inspires me to no end, and I really liked the one as you see here that said Let It Snow, and I already had the snowflake tote, and snow doesn't offend anyone except those who have to shovel it, so I ran with that as my theme. No psychic powers involved whatsoever. 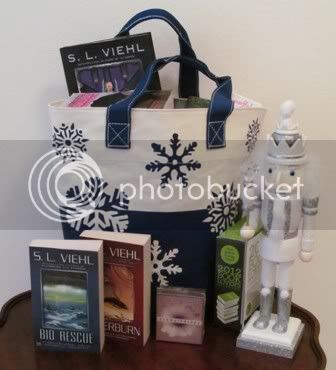 Today I'm adding the non-psychic inspired Let It Snow tote out-of-print paperback copies of my SF novels Bio Rescue and Afterburn, a mini aromatherapy kit, and a 2012 BAM Book Lover's block calendar that says it has over $100.00 in savings. I'm also adding a mystery item, and the hint for this one is that it comes from the Publishing Fairy, and you know what sort of wishes she usually likes handing out around here.

If you'd like a chance to win this giveaway, in comments to this post tell us about anything you find inspiring during the holidays (or if you can't think of anything, just toss your name in the hat.) I will draw one name at random from everyone who participates by commenting on this or any of my other Let It Snow giveaway posts from now until midnight EST on Wednesday, December 21, 2011, and send the winner the tote with all the contents. This giveaway is open to everyone on the planet, even if you've won something here at PBW in the past.
Posted by the author at 12:00 AM