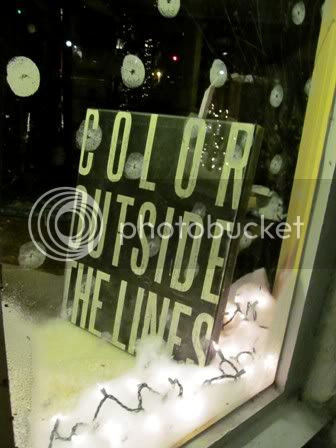 For me the year of change is almost over, and I've been waiting for a new nudge from the universe to give me some creative direction for 2012. After I sold the steampunk novel I thought it might be the Year of New Ventures, but that didn't feel right (probably because I still have two books under contract from this year and last year to write.)

On Christmas night we decided to take a ride to see the lights, and then stopped for hot chocolate and a walk around town. It was one of those odd, completely spontaneous family outings that was filled with laughter and memories in the making; the kind of thing I cherish most. It was while we were out walking that I spotted a decorative sign with a saying that I've probably seen a million times: Color Outside the Lines.

First it made me reminisce. When I was a kid, I rarely colored inside the lines. I drew extra stuff on my coloring book characters: superhero capes, braids, jewelry, background scenes, and anything else I could think of to fill up the void of the empty page. I also wrote captions, made dialogue balloons and signed everything (because that's what real artists do.)

I've always enjoyed thinking outside the box, too, because there's enough room there to be different and experiment and discover new ideas. I think I've gotten away from it recently because I've been more focused on productivity and organization, which are just as valuable but shouldn't hog all your brain power.

For example, one of the most exciting things I did in 2011 was to try and reinvent the bookmark. That one little project was such a simple thing, and lots of fun. At the same, it was very challenging to some up with something that hadn't already been done. What I learned from that I've carried over into a dozen other creative projects, including my writing. I don't do enough of that anymore, and I want to. I want to move past what's expected and accepted and what everyone else does. 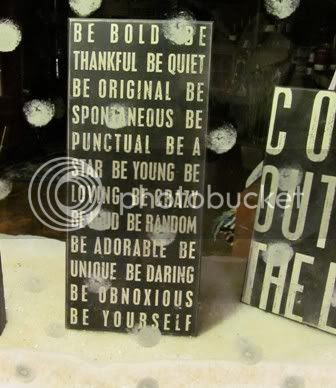 I'm not afraid to work in the void; I like having the space to do what I want. I'm also not afraid to mess up; every success has a foundation of dozens of mistakes. The universe knows this, which is probably why I got this particular nudge. It's time for me to climb out of the box, step over the lines and see what I can do.

When I saw the sign in the shop window, I was wondering just how I was going to tackle this, and got another nudge when I read this other sign sitting next to it. I think I already have the Be Obnoxious part down, but I can definitely use the rest as additional inspiration.

So my New Year's resolution is to make 2012 the year I color outside the lines. It's a bit scary, and I have no idea what will happen, but I trust the universe as a creative navigator. Truth is, I can't wait to get started.

What are your plans for 2012? What do you hope to accomplish? Let us know in comments.
Posted by the author at 12:00 AM

Labels: inspiration, outside the lines, the writing life