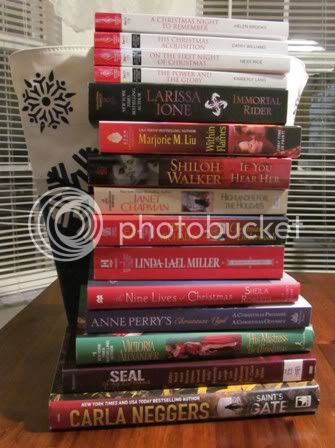 Mom and I made a pilgrimage to the nearest brick-and-mortar Barnes & Noble on Wednesday, where I filled not one but two tote bags with a lovely assortment of books. Since I've already griped about what I buy and won't buy, I thought it would be interesting to look through my bags and see how I did with my actual purchases.

Four Harlequin Presents. All were holiday-themed, and all are written by authors who are new to me. I haven't been reading HPs since they've acquired so many new authors, and I'd like to see what they're writing.

Larissa Ione's Immortal Rider. I buy everything she writes except her grocery list, so grabbed four copies, which was all the store had left. Larissa sells out quick.

Within the Flames by Marjorie M. Liu. I also buy everything Marjorie writes, and weirdly there were also only four copies left of this one, which are now all mine. When I get more from an incoming order I placed with BAM I might be nice and share them.

Highlander for the Holidays by Janet Chapman. There's an adorable dog on the cover, he doesn't seem to be warning me off and besides, I hate being predictable. Cross your fingers for me.

Fern Michaels' Christmas at Timberwoods. It's a holiday-themed romance set in a mall. I've never read a mall romance. How does one write a mall romance, anyway? Don't know, so I had to buy it. 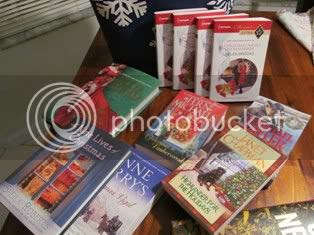 Shiloh Walker's If You Hear Her. I think this is a story Shiloh and I discussed a while back when it was in its earliest incarnation, and I'm very interested to see what she ended up doing with the premise and the protagonist.

Holiday in Stone Creek by Linda Lael Miller. Semi-random pick. I've heard she's a decent writer. I haven't read a cowboy romance in a while.

Seal of my Dreams Anthology. I don't know why I assumed this would be available only in e-book format, but I did. It was a nice surprise to see it in print. This was the only anthology I bought, but my blogpals Alison Kent, Jo Leigh and Stephanie Tyler have stories in it, and so does Barbara Samuel, so that means at least four of the stories will be well-written and interesting. Looks like the cover model is wearing a yarmulke, so maybe it's a holiday read, too. Ha.

Anne Perry's Christmas Vigil. I used to read her quite a bit before I got burned out on historicals. Don't see many duologies by one author these days. I'd call this a semi-semi-random holiday pick. I liked the cover art, too. Very Christmasy. 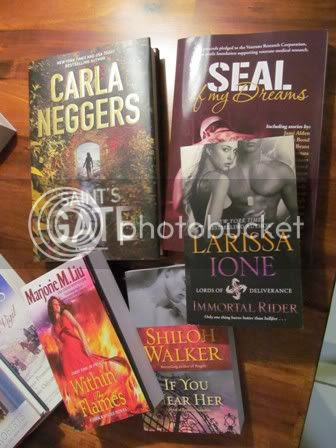 The Nine Lives of Christmas by Sheila Roberts. I never see authors named Sheila, and from the jacket copy it sounds like a cat is the protag. Until Sofie Kelly gets off her lazy butt and writes me another magical cat book, I'll just have to console myself with this.

Saint's Gate by Carla Neggers. Classy author + elegant writing = worth the investment for hardcover. And a story about international art heists, suicidal nuns and the Feds in Maine? This is so a book for me. Unique cover art, too.

What I love most about going to the brick-and-mortars and browsing the shelves are the surprises, like finding Seal of My Dreams in print, and Carla's latest (I simply can't keep up with all the new releases; sometimes I don't know about them unless I see them at the bookstore.)

I'm also excited to try out the random picks because I have very good luck with that method; I started reading Linda Howard, Patricia Briggs and Rob Thurman just by picking up their books at random. Taking that chance doesn't always pay off, but sometimes you discover these great hidden jewel-type authors.

So there you have it. I also bought two tote bags, one to replace one of my favorites that I gave away, and this large, sturdy blue and white snowflake tote which I'll probably be giving away or using for a holiday gift. I know I kind of stacked the TBR in my favor, but I feel I also bought enough random picks that the mix will be interesting (Poor Janet Chapman, she's really the one in the hot seat. If this a lousy story I swear I'm done forever with dog-on-the-cover romances.)
Posted by the author at 12:00 AM