About an hour ago I finished revisions for one of my editors, which was the last writing job I had to do this year.  My reward for hitting the final finish line is a movie (Cowboys and Aliens), a week of writing whatever I want (probably just posts for PBW) and as much rest and relaxation as I can manage during the holidays.

It's always a strange feeling to finish out the writing year.  In 2011 I published three novels, sold four and wrote five.  There have been years when I've done twice that much work, so it doesn't feel like a lot, but I've never worked through so many challenges and changes as I have during the last twelve months.  I'm tired, and I definitely need a week off, but I'm also satisfied that I did my best even in the worst of times.  And while I am my own harshest critic, that actually feels pretty good.

Now I am going to unplug for a few hours, get my kids and take them out to lunch.  In the meantime, I have a contest challenge for you guys that involves this: 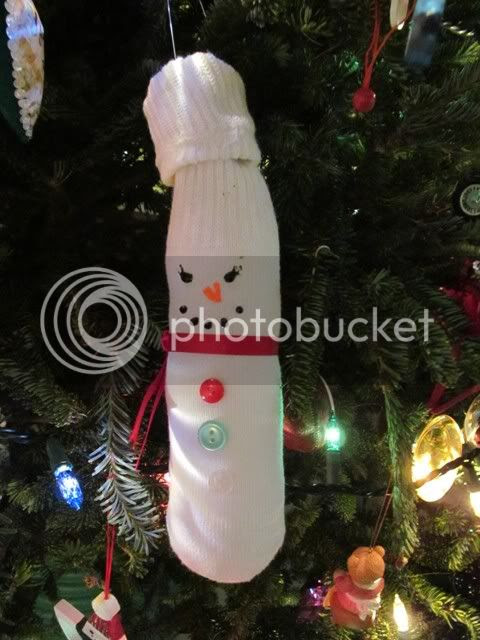 Meet the Sock Ornament of Doom, which my daughter made when she was in preschool.  This stuffie has been hanging on our tree ever since she brought it home, and we love it so much that I think it's high time it got a new name.

If you have any ideas, in comments to this post, suggest a name (male, female or other is okay; just please keep it G-rated) for our ornament by midnight EST on Monday, December 26, 2011.  My daughter will choose the name she likes best from all the entries, and I will send the winner a signed ARC of Nightborn, the first novel in my new Lords of the Darkyn trilogy.  This contest is open to everyone on the planet, even if you've won something from PBW in the past.
Posted by the author at 12:00 AM