After reading this Stylist.com article on cleaning out and organizing your purse, I was shocked by how heavy the purses in the slide show were. On average, the editors who contributed photos of their baggage and its contents were lugging around over six pounds of stuff. No way could I do that. 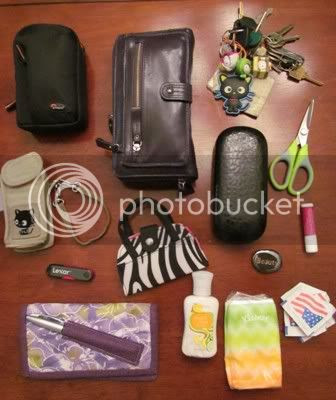 Camera in case -- I have learned to carry it with me everywhere or I miss the best shots.

Wallet -- actually a clutch; the only thing large enough to accommodate all my fake IDs.

Scissors -- because I can't use the annoyingly tiny ones in the sewing kit.

Sunglasses in Case -- prescription; gotta wear them whenever I step foot outside.

Flash Drive -- in case someone breaks into my house and steals the computer and all my backups while I'm shopping. It could happen.

Mobile Phone in case -- disposable drug-dealer pay-as-you-go phone, costs me a hundred bucks a year, only makes phone calls, and pisses off everyone who pays a hundred bucks a month for their hi-tech toy phones.

Checkbook -- in case the credit card machine fails. Also has the pen I carry tucked in the cover.

Small bottle of lotion -- for my hands; they get chapped in the winter.

Tissues -- so I don't have to use my sleeve and because I won't carry a cloth hankie like my Mom.

Wet wipes -- something I constantly use for like a million purposes; I've even used them to clean dead bugs off a windshield when the wiper fluid ran out. I'd carry a box of them if I could fit it in my purse.

Beauty-engraved rock -- to remind me what to look for while I'm out and about.

Chapstick -- the only thing I put on my face besides glasses

Missing: the paperback book I was carrying, which I lent to a friend today, so I need a new one.

I put all the stuff back in my purse and weighed it, expecting it only to be a couple of pounds, and was shocked to see that it came in at 4.7 lbs. Since I always carry around a book in my purse, that would take it over 5 pounds. I had no idea it was that heavy. No wonder I walk tilted to the left.

I think my final goal for 2011 is going to be reducing the amount of junk I carry in my purse by half. Won't be easy, but it will probably help get rid of some of the neck and back pain I get after shopping expeditions.

Ladies, what do you carry around in your purse that you can't live without? Have you ever weighed your purse, and if not, how much baggage do you think you're carrying around? Let us know in comments.
Posted by the author at 12:00 AM