I see things are again getting a bit nasty out there in NetPubLand. I read a post this morning that sizzled with such contempt for traditional publishing I had to check afterward to see if I still had eyebrows. Then I ran into another elsewhere that repeatedly bashed self-publishing as if it were the root of all evil snaking through the open gates of Hell.

Kind of reminds me of the War of 2001, when the new crop of e-published authors were going to save/destroy Publishing as We Know It. Are these things on ten-year cycles, or what?

Relax and put down your guns; I'm not on either side. I don't think the self-published are talentless scum, nor do I think the traditionally published are clueless dinosaurs. I don't think one way is better than the other; both have pretty much an equal amount of merits and headaches. I don't think this situation should degenerate into a war between writers, but like anyone listens to me. Nor am I going to hold my breath wishing it wouldn't.

How we choose to publish is not nearly as important as the quality of what we produce. You won't hear hardly anyone talking about that because that's the boring work part. But the only war that should concern us as writers -- the only real war -- is the one that takes place on the page. 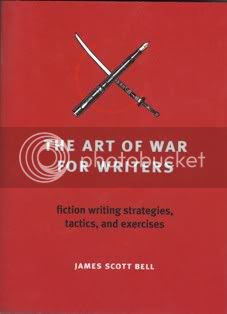 Fortunately there are some experienced allies out there who can help us win some of those battles, as author James Scott Bell does in his quite excellent writing nonfic, The Art of War for Writers.

I think Raine gets the blame for me picking up this book; I'm pretty sure she quoted it once and the title stuck in my head for months until I happened to see a copy at my local BAM. From the title there's no doubt the author was inspired by Sun Tzu's The Art of War, and in fact he quotes the famous Chinese general many times throughout the book. He also employs many of the same tactical philosophies as the famous warrior to provide a battle manual for writers.

As the author says in the introduction, "This is not a comprehensive "how-to" on fiction." -- and he's right, it's not. You won't find step-by-step instructions on how to write a synopsis, pitch an editor or set up a web site in this book. What you will discover is infinitely more valuable: keen observations on the biz and the business of writing, creative navigation, thoughtful strategies and useful exercises. Basically all the things that go into not just creating but sustaining a focused, productive career are in this book.

I was impressed by how the author illuminates virtually every major problem common to writers, and his practical approach to solving them. He also did this without slanting his advice toward any specific genre, or playing favorites with example authors. He speaks to every writer, so whatever you write, you can use this book. That's extremely hard to pull off.

Bell's brevity and sense of humor are terrific. The chapters are short, the language is concise, and the author never once wasted my time by nattering on and on about anything. The chapter titles are a bit on the long side, but for titles he uses statements versus the usual topical words, which makes even the table of contents interesting reading. As for the humor, Bell's is dry and subtle, but it's there, and that also contributes to the engaging aspects of the book.

I'm divided on whether or not I think this is a good book for beginning writers. On one hand I think it should be required reading for anyone who is thinking of getting into the biz, because this is it -- this is the war, right here. As I've always said, compete or die. On the other I think it may seem harsh and intimidating to the timid or undecided, especially when the author makes certain unequivocal statements.

Such as: Should you outline a novel? Bell says yes. He doesn't dance around it, he doesn't apologize and he doesn't offer warm fuzzies to people who hate outlining. He does point out that some successful authors don't outline -- and then he tells you why you should be outlining. So if you're looking for someone who is going to cater to all your quirks and preferences or kiss your butt, Bell is not your guy.

I seriously loved this book (and maybe it's because of my military background, but I think civilians will find it just as absorbing.) Every chapter had me from the first line, and the author always spoke to me as an equal, and never once to bitch or complain about his experiences. That I deeply appreciated, particularly as I've read far too many how-tos that delivered everything in a decidedly patronizing tone, or were nothing but neurotic whinefests.

As always you don't have to take my word for it. In comments to this post, name the last book you read that was superbly written (or if it's been too long for you to recall, just toss your name in the hat) by midnight EST on Thursday, April 21, 2011. I will select four names at random from everyone who participates and send the winners an unsigned paperback copy of James Scott Bell's The Art of War for Writers. This giveaway is open to everyone on the planet, even if you've won something here at PBW in the past.
Posted by the author at 12:00 AM