No Monday ten list today, sorry. This is deadline week for two books, I'm also working on a copy-edit, and I'm running behind schedule on everything, so my internet time is going to be measured in seconds. Bear with me. After May 1st things around here should get back to normal-level chaos.

Even during an insane week like this it's not all work and no play for PBW. Now that Spring has arrived, I've relocated to the back porch for my meditation sessions and breaks. Mostly I sit and think, the dogs sit and watch the birds, the birds watch the dogs, etc.

Sometimes I get incredibly lucky with the camera: 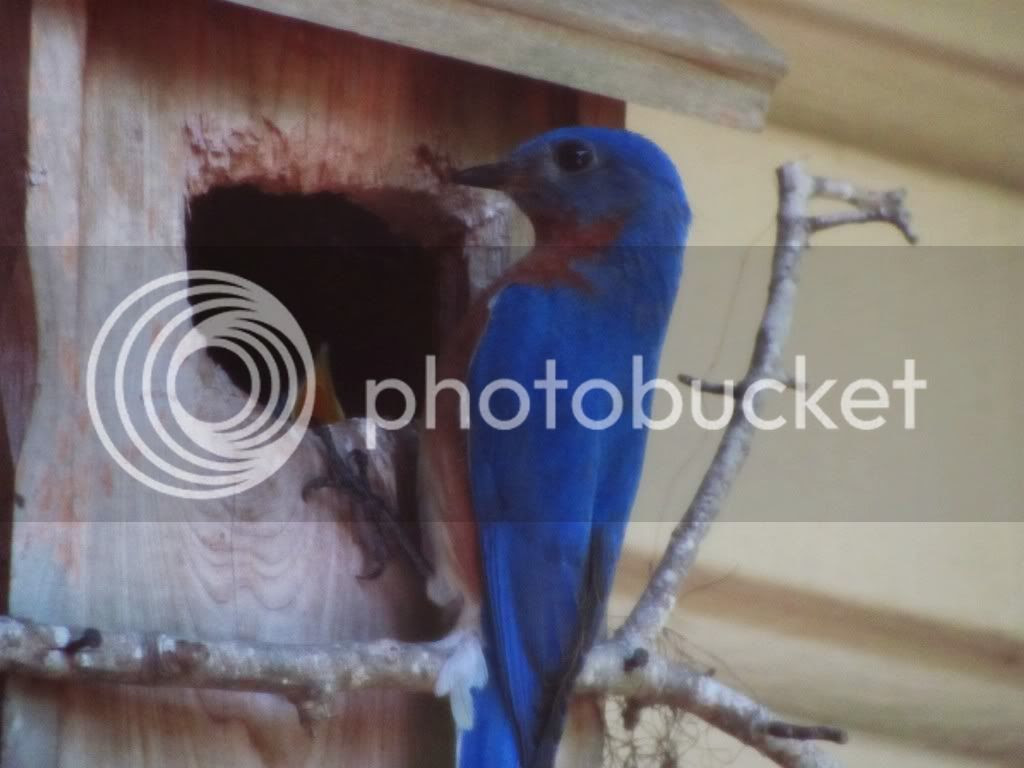 Another fabulous photo op happened one morning last week, when the birds kept nervously zipping around and Cole (who takes his guard duties quite seriously) began barking up a storm. He behaved as though there was something in the old oak tree; something like an army of rabid squirrels. I tried to calm him down but finally I had to put him in the house or I'd never get any meditating done. At which point Cole jumped at the windows, still barking, and then the puppy, who only hates people, cars and all other dogs except Cole, started growling at the tree.

I figured some kind of hawk was perched up there (the furry people around here don't like big birds) and grabbed my camera before I went out to investigate. There was nothing in the tree. In fact, all the birds that are usually in the yard were suddenly not in the yard any more.

I heard a sound I haven't heard in almost a year. A brief, low whooshing sound that came from above the tree, like God just turned on his blow dryer for a few seconds. I looked up and saw this: 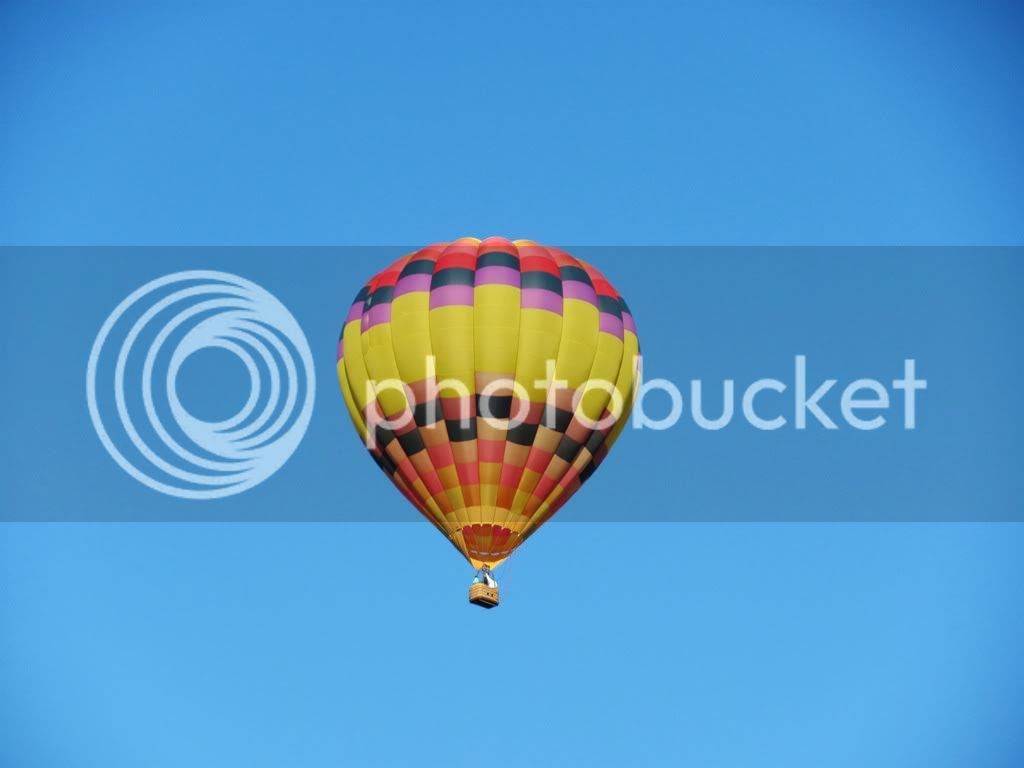 Although I've photographed this balloonist before, I took a snapshot for my journal. I know it's childish, but it always gives me a bit of thrill to see a hot air balloon. I've never ridden in one, but I can imagine how it feels to be up there, drifting along in such a beautiful airship, far above and away from all the stuff that happens on the ground, just you and the balloon and the sky.

I've also seen other balloons fly over my house in the past, but never more than one in the sky at a time. That might be why I started thinking about how I could this balloonist into a blog post about the writing life. I've been wrestling with the analogy ever since.

Writers are like balloonists in many ways. When we write, we build our own airships out of our dreams and imaginations, and hope someday to get them off the ground. We want to go up into that place that looks so peaceful and beautiful. We work so hard to build our airships so that they're sky-worthy, too, don't we? Even when we're exhausted by the pressures and responsibilities we have here on earth, we drag ourselves into our workshops to build just a little bit more before we go to bed. We make promises to ourselves that someday we will go up, and it will all be worth it.

The reality rarely measures up to our dreams. Half the time the first airships we build never get off the ground. Or when we finish them and try to go up, we crash right after liftoff. Naturally we pick up the pieces and put them back together, or we build something new and work toward another attempt. And another. And another.

If/When we ever do get into the air for the first time, and stay there long enough to get a good taste of it, we realize some new things. Actually going up is not as peaceful or as beautiful an experience as we thought it would be. It's not thrilling, it's kind of terrifying.

The sky that looked so gorgeous from the ground, we discover, is also endless and empty. There's nothing to hold onto up there. We look back, and all we can think is how much damage a fall from this height is going to cause. How much it will hurt us. How it might even kill our desire to ever go up again. We begin to fear things over which we have little to no control, like what people on the ground think of our balloon, or how we may never go as high or as far as we expected.

I think at some point during that first flight, and perhaps the next couple that come after it, we wish we could take it all back. Reverse time, clear out the workshop, sell the damn balloon-making stuff and take up something a little more sane, like transporting old dynamite or testing faulty chainsaws.

We do look for ways to cope with the fear. When we first get serious about going up, I think most of us look for other people who are also trying to get off the ground. We expect them to be kindred spirits, because they are the only people who really understand what we do. And over time we do meet a lot of people who want to go up, or who are already up there, or who were and are trying to get back up, but few turn out to be genuine friends.

Some say it's balloon envy, or simply inevitable, but I think it might be because no matter who we meet or what we talk about, when we go up, we know we have to fly alone.

We still try to find a place, a community, or a group of some kind that can provide practical and moral support. Some join balloonist clubs, and hang out with other hot air junkies, and haul their airships to big flying conventions. Those folks get very good at pretending to like each other, that's for sure. While the desire to go up seems to morph into a vicious competition for a particular spot in the sky.

That's always been the weirdest part to me. That anyone could consider such an endless sky to be something so small, as if it shrank down to some tiny little patch that everyone has to own. Everyone who wants it grouses about how there are too many balloons and not enough sky, when what they're really afraid of is that their airship will not be seen.

Over time the love of building and flying can be forgotten, especially when all that matters is to do whatever is necessary to be watched and admired and considered the best. The dream of going up dwindles beneath the obsession to have the biggest airship, or the most beautiful, or the one everyone wants to ride in. Soon going up is no longer a dream, and building offers no more pleasure. It all turns into some kind of unpleasant chore, a business necessity, something to dreaded and endured and hurried through and even avoided. But being left behind on the ground is even worse, so that can't happen.

Anyway. While I was brooding over all of this, and wondering why in this year of change certain things seem to be (depressingly) the same, I heard another, fainter blast of God's hair dryer in the distance, and looked out to see this: 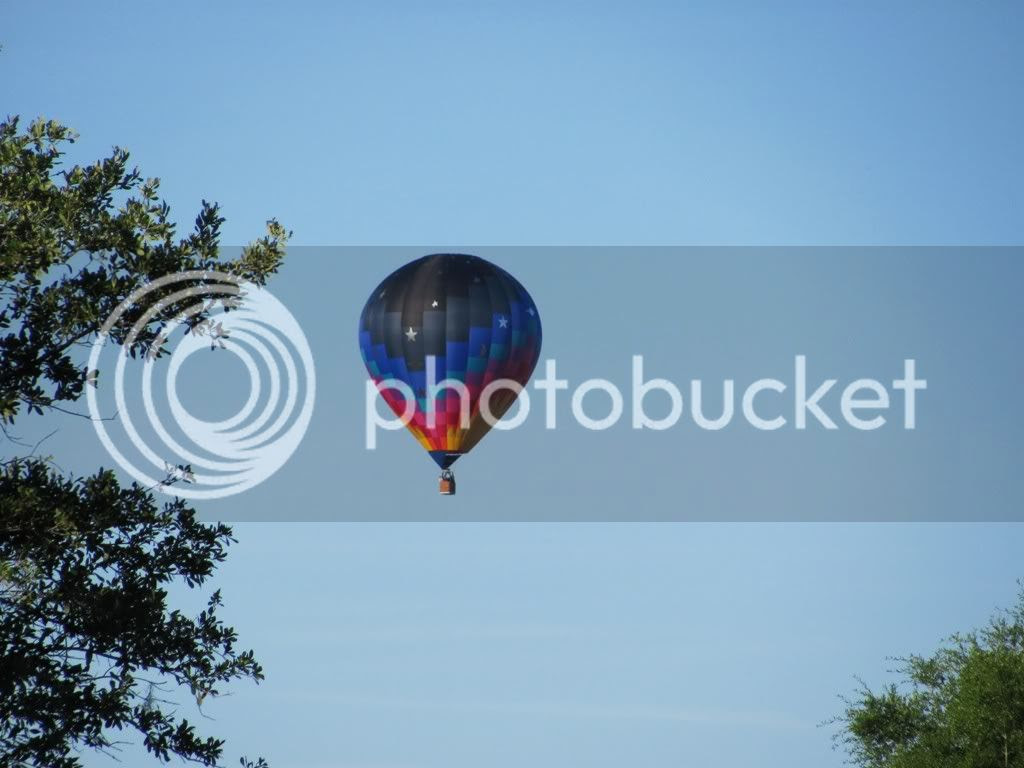 The other balloonist was too distant for me to get a decent shot of his airship, but even faraway it was beautiful -- and strangely reassuring, like an answer to a question I didn't want to ask. 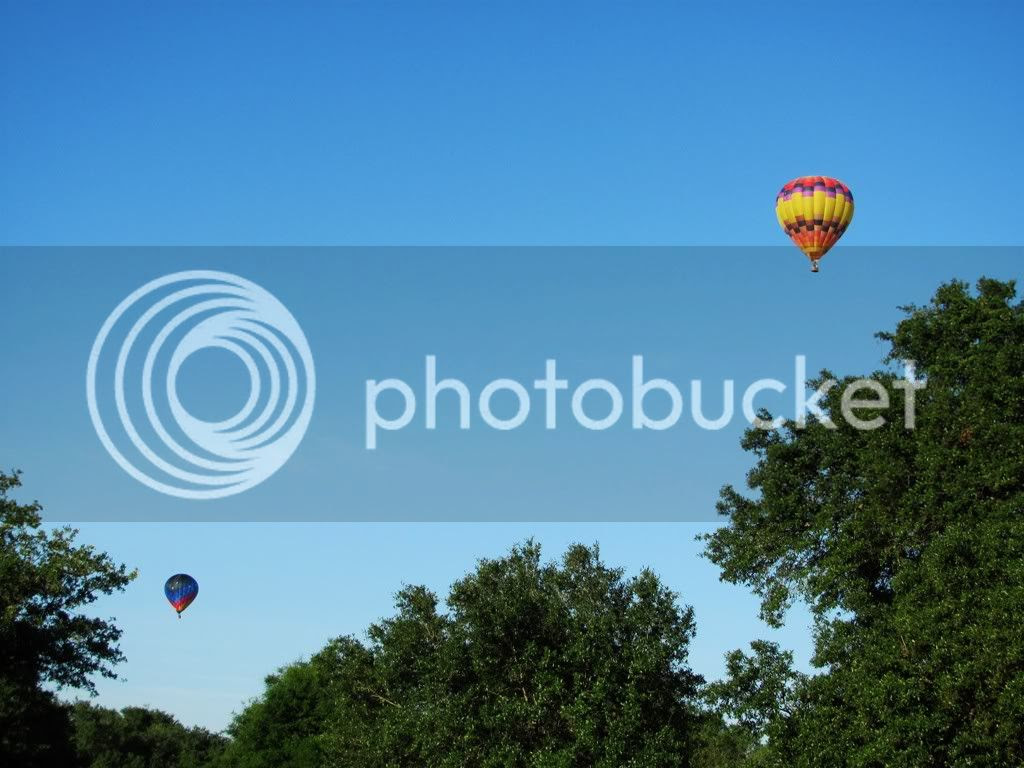 Definitely a cosmic message, although I think I will leave it up to you to decide what the universe is saying.
Posted by the author at 12:00 AM