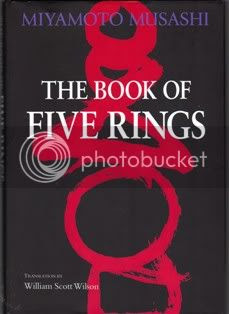 Back in the beginning of my career when I was researching swords and swordmasters, I picked up William Scott Wilson's translation of Miyamoto Musashi's The Book of Five Rings. Musashi, a legendary Japanese swordsman who lived during the seventeenth century, wrote the work as a kind of ops manual/personal guide for his followers and other samurai. The author probably had no idea how many people outside his profession would study his philosophies and apply his wisdom to their life's pursuits.

It's a deceptively simple book, one that over the years I've gone back to reread probably a hundred times. At first I was only interested in the warrior's mindset for characterization purposes, but gradually I went back to it for the clarity it offers, and to wrestle the enigma of the book itself. Every time I read it, I find something new to think about and apply to my work.

In his chapter "The Earth" Musashi set down nine rules about how to approach the study of martial arts. When you're facing an opponent who can cut you in two with a single blow, obviously you've got to have your game on. But what he wrote for other samurai is not really about swords or fighting, it's about how to think and conduct yourself on or off the field of battle.

The nine apply just as beautifully to storytellers as they do warriors:

1. Think without any dishonesty.

No one, not even a rug, can lie like a writer. When we're not busy telling our tall tales to the world, we often deceive ourselves. Truth, even the painful variety, is the foundation of clarity.

2. Forge yourself in the Way.

Now you know where I got the title for Way of the Cheetah. Knowledge is power, but so is practice. If you're a writer, you have to educate yourself in the ways of writing, but you also have to practice them, and observe other writers, and immerse yourself in your art in every way possible. No swordsman ever won a battle just by talking or reading books about fighting.

3. Touch upon all of the arts.

Art in any form is an act of creation, and creative people are inspired and energized by other creative people and their works. As writers we're all about the books, but it's helpful to regularly step outside the writing world and commune with the other arts.

4. Know the Ways of all occupations.

It's not enough to be a writer and know our business. You have to investigate other professions and understand how they conduct their businesses. If not for bakers handing out free samples to tempt customers, I probably never would have thought of trying promotional e-books.

5. Know the advantages and disadvantages of everything.

6. Develop a discerning eye in all matters.

Being easily distracted is a common problem among writers; with social media it's also getting worse. You have just so many hours in the day to work and study and learn, don't squander them on things that ultimately have no value to you as a writer.

7. Understand what cannot be seen by the eye.

Writers read between the lines better than any people I know, so seeing and understanding what can't be seen shouldn't be a problem for us. Yet with all the make-millions hoopla going around NetPubLand lately about digital self-publishing, very few people are talking about what we aren't being shown. Most writers seem to see a dazzling new way of Publishing, which is what they're being sold; I see a massive marketing and publicity campaign being run by the digital self-publishing service provider in order to pimp their wares and secure more works.

8. Pay attention to even small things.

I came up with what is possibly the best series title of my career (StarDoc) by noticing in a grainy newspaper photo a marine biologist's vanity license plate (SEA DOC).

9. Do not involve yourself with the impractical.

I think this may be the most important of the nine. Making a list of what is impractical to writers would run about ten pages, so it's easier to focus on what is practical: Our work. If the majority of your writing time as well as your attention and efforts during that time are being spent on things other than the writing, you're not being a writer. Simple as that.

Musashi doesn't offer any quick fixes in The Book of Five Rings. He's not concerned with shortcuts or handshakes or cronyism. I think above all things he believed in self-reliance; that everyone who seeks the way has to walk it alone. It's an odd philosophy for someone who wrote a book to be read by others, but it also makes sense, at least to me. Musashi wanted to share the wisdom he'd acquired by himself so that others might find their way in the world. And whether you're a samurai or a storyteller or a shoe salesman, that's a path we all have to take.
Posted by the author at 12:00 AM

Labels: Musashi, The Book of Five Rings, the writing life