Everything I Didn't Want to Know (Almost)

Blogger via Google has now stuck me with a Stats section, which shows page views for Paperback Writer per day, week, month and year as well as referral links, search terms, countries where my audience resides and what every one of you were doing last night at midnight. Yes, I'm kidding about the last part (although God knows, that'll probably be the next invasion of privacy.)

I've never put any stealth software or traffic counter on PBW, so until now I've been able to pretend only a dozen or so friends stop by occasionally to follow my rambling. Turns out there are a lot more of you dropping in than I realized (more like four times the amount that ping the blog whenever I ask.) Thank you for so thoroughly tromping on my blogging fantasy, Google.

One good thing about this is I can see which posts and pages are getting the most traffic. Novel Outlining 101 is at the top of the charts today, as is my Freebies and Free Reads page. I'm glad the most popular posts are the ones about novel writing and free stuff; being a writer's resource is the whole point of PBW. 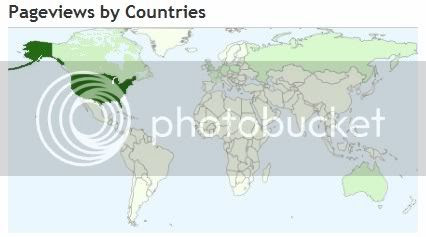 Another bonus is this global map, which shows where my visitors reside. I'm really not nosy, but it is pretty neat to see where everyone is (and the map only shades in the countries where the majority of my visitors live; there's no personal residence info or any other creepy invasive stuff.) The United States tops that list today, followed by the United Kingdom, Canada, Russia, Australia, the Netherlands, Germany, Slovenia, France and Israel. As I've always suspected, we are a very international bunch around here (and I know one young lady in France who is reading this instead of unpacking those boxes in the spare bedroom, which she had better do before her father comes to visit, hint, hint.)

I'm not happy about the rest of the data they're shoving at me -- sometimes ignorance truly is bliss -- but I suppose it'll come in handy the next time the Powers That Be want to know how popular the blog is. No more pinging required. That's rather depressing; I always liked the ping posts. Sniff.

What do you guys who are using Blogger think of this new feature? Is it just the next version of incessantly Googling yourself, or do you think we can get some practical use out of it?
Posted by the author at 12:00 AM