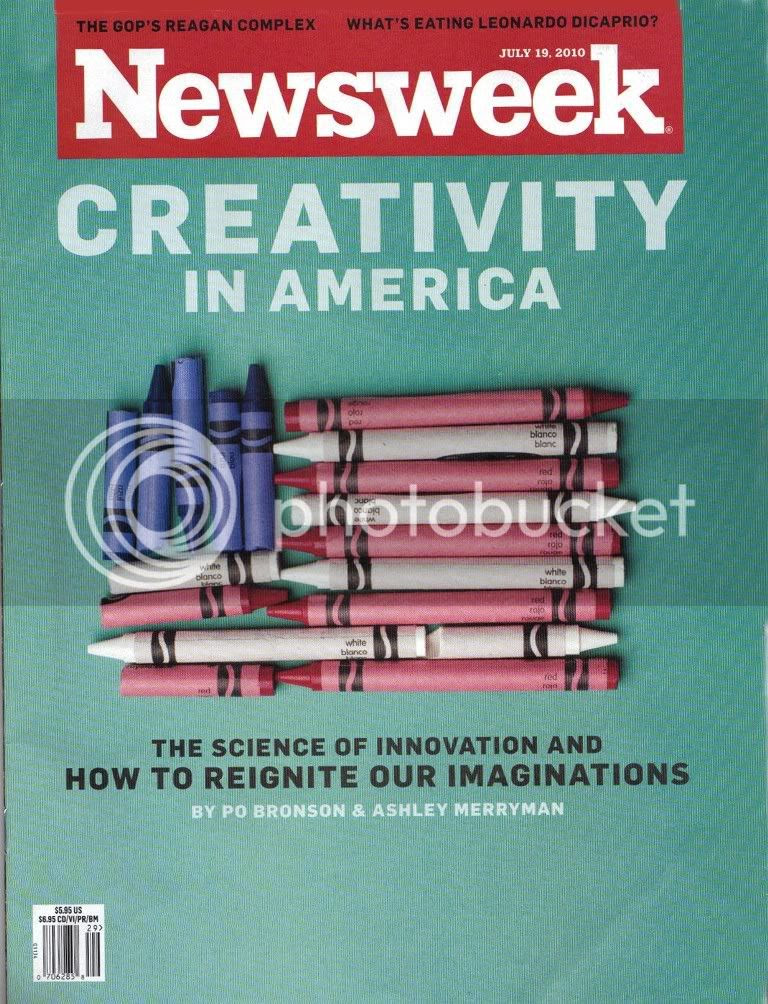 There's an interesting article about creativity in America in the July 19th issue of Newsweek magazine. You do have to plow through a lot of political garbage to get to it (the piece begins on pg. 44), but the topic was interesting enough to tempt me to buy the issue and wade on through.

According to Newsweek, things are pretty dismal in the creativity department. Evidently for the first time in decades creativity among American adults and children is in decline. Since this observation is based on a single test administered by psychologists to a limited number of citizens, I'm more than a little skeptical of the conclusions. The article does make some valid observations, such as noticing the creative deficits in public education (likely the culprit of budget cuts, which is now hurting even the ever-popular athletic programs.)

Some social and cultural changes seem to have adversely affected creativity in children, and the top two offenders may be video games and mobile phones. Instead of playing outside the way my generation did -- you couldn't pay us to stay in the house -- today's kids are closeted in their rooms with their Playstations and Gameboys. Inactivity causes obesity among children, so why not atrophy of the imagination? Then there are the phones. Now rather than hanging out and having real conversations with friends in person, kids are texting each other; as often as ten thousand times a month. Kind of hard to play pirates digging for buried treasure in the back yard on Twitter.

I will concede that video games and mobile phones do have a few good points. Thanks to computerized gaming, my kids have become so tech-savvy their dad and I defer to them now whenever anything electronic needs to be set up, tweaked, fixed or upgraded, and no, I'm not kidding. While neither of them texts in the ten thousand range per month, they both have scores of friends and can arrange get-togethers, movie dates and other gatherings in a few seconds (I remember spending half an afternoon riding my bike around the neighborhood just to round up enough kids to play a decent game of softball.)

I don't think creativity in American children is declining as much as it's changing, and the tests we used fifty years ago to measure it are now basically obsolete. I teach enough writing classes in public schools to know exactly how creative kids are, and trust me, they never fail to blow me away. Classes in the arts are important, but even without them children find ways to express themselves, explore their passions and create. We just don't see them because they're doing it after school, during weekends and over summer vacation. Creativity has gone off the grid, underground, and probably because teachers and adults have stopped paying attention to it.

Both of my kids are creatively active among their social groups in interesting ways. My daughter gave her spare flute to her best friend, taught her how to play it, and now they have their own practices and jam sessions, both at school with other friends in the band and here at the house. If I'd let her Kat would live in the band room, but when she can't be there she creates her own opportunities to indulge her passion for music, including dressing in character and playing her flute at a local RenFaire. For an end-of-the-year project, my son got together a half dozen other students and made a short spoof film on, of all things, Calculus theories. One afternoon when he and his friends were baking (and you really have not lived until you've watched four big, strapping young men take on the challenge of making Toll House cookies) they also studied for a language final by speaking to each other in French.

I try to contribute to their creativity by encouraging it in fun ways (and if you visit my photoblog, you've seen how we've made cake out of a poem) but even if I didn't, the kids would do it on their own. My kids are not exceptional; their friends are doing similar things. Children are so naturally creative that I imagine the only thing that stops them are adults with their outdated psych tests and their half-baked conclusions.

The Newsweek article's best points were in how we can foster creativity in children, ourselves and other adults, and they included common sense suggestions like turning off the damn television (hooray!), exploring other cultures, and allowing time and opportunity for the development and pursuit of our passions. Creative harpy that I am, I'll add a few more:

Arts Cross-pollination: Creative souls need outlets, and not just in their area of talent. I'm a skilled quilter, a decent gardener, a competent cook, a fair sketcher, a terrible painter, a scary poet and a journaling addict. I also make jewelry, books, clothes, pillows, handbags, digital art, and whatever else catches my eye (at the moment it's mixed media art.) I live this Renaissance life because I want to make things myself, and because I know there is more to me than the writer. I also learn from everything else I do, and aside from recharging my batteries, I get tons of ideas and images and concepts that I pour right back into the writing. Nearly everything I know about arts other than writing I got from books -- I even taught myself how to knit from a book -- so all you really need to try something is the willingness to do so, whatever supplies are involved, and a public library.

Failure: An essential part of the creative journey is not to succeed. As a society we are so focused on achievements and honors that we forget we learn more from our mistakes than we do from our triumphs. Adverse reactions to perceived failure discourage us like nothing else, which limits us creatively. I'm not saying we should celebrate every failure, but it would be nice if we curbed some of our negative reactions to it. The only reason we try again is if at first we don't succeed, right?

Fun: In our stressed-out world, no one seems to be having much fun these days. We're overworked, under-appreciated, and so exhausted we can't even enjoy a vacation. We also know that lack of joy = sour stagnant souls. So we desperately need things that we enjoy and that make us laugh. Feed yourself a steady diet of hate, negativity, depression and what have you, and after a while you can starve a sense of humor -- and the creative soul it nurtures -- to death. I try to do one fun thing every day, even if it's just for five minutes (I've been working on my fun little art book every afternoon.)

Non-Herd Mentality: We're a tribal species, so it's important to us to have a sense of belonging, both at home and at work. This is why personal and professional organizations are so popular. But group-think can become so corrupt and controlling that it squashes individuality and kills imagination, all for the sake of conformity. Social networking, self-promotion, and homogenizing ourselves so as not to offend anyone does have a price, and I think it costs us our creativity. Writers have always been the upstarts of the arts; I can't believe we'd give up that simply to be more acceptable sheep. So while belonging to a group is fine, letting them suck the creative life out of you isn't. See exactly what you're getting out of the group, and if you think it's worth it, keep some part of yourself and the work separate from them and their influence.

Zen Vengeance: There are people out there who take pleasure in your pain or even in causing that pain. They became the way they are because of people who did the same to them, and this is why they feel entitled to do it to you. Want to break the cycle and get even with them without hurting anyone at all? Practice Zen revenge. For every wrong done to you, and every pain you've been made to suffer, don't just turn the other cheek. Let your response be to do something positive for someone else. Be generous and caring, encouraging and helpful, and find ways to bring happiness to others. Let not becoming like the people who hurt you be your revenge. Because you know what? It is.

As for the outlook on the future of creativity, I'm not really worried. Creative people are the way they are from birth, even if they're not aware of it until later on in life. We are driven, too, by forces that people outside the creative community will never fathom. I have faith that we will always find ways to nurture ourselves and hopefully each other. It's part of who we are, ingrained in us on the cellular level, and that's not something Newsweek or a psych test can even begin to measure.
Posted by the author at 12:00 AM