We've managed to partially fix the upload problem, but my prize images may be a little fuzzy until we finish the fine tuning. I know we were pretty late posting this, so I'll extend the deadline for giveaway #7 an extra day to allow everyone have a chance to enter.

Blogging has brought a lot of new authors onto my radar, and for that I'm very grateful. Since I gave up traveling and public appearances I don't get out at all anymore to meet my colleagues. So I have no idea if Shiloh Walker is as hot as every says she is (but I'm guessing, yeah, she is.)

Fortunately weblogs have turned the online community into one huge perpetual writer's conference, where I can drop in and talk to virtually any of my writer friends whenever I like. And I don't have to wear makeup and panty hose and eat mystery chicken while I'm hanging with them, always a much-appreciated side benefit.

I was tempted to do a giveaway of books by all the writers I've met since I opened PBW's virtual doors, but UPS told me they didn't have a box the size of a house and the shipping charges would balance the national deficit. So I chose books by six blogging writers who have one thing in common aside from being very talented, skillful storytellers -- at some point during the last four years they all wrote something on their weblogs that kept me from quitting.

For the seventh PBW Holiday Giveaway, I have: 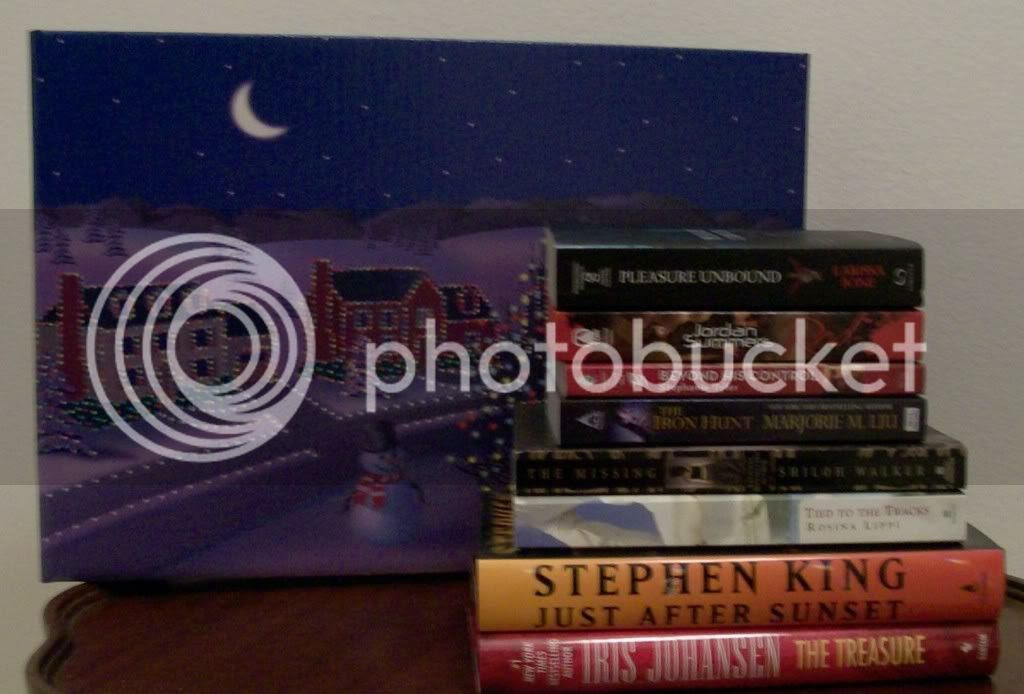 Six Books by Blogpals Who Inspire

unsigned paperback copies of: Pleasure Unbound by Larissa Ione, The Iron Hunt by Marjorie M. Liu, Red by Jordan Summers, and Beyond His Control by Stephanie Tyler.

unsigned trade paperback copies of: The Missing by Shiloh Walker and Tied to the Tracks by Rosina Lippi

And as a little Christmas bonus, unsigned hardcover copies of: The Treasure by Iris Johansen and Just After Sunset by Stephen King (two authors I wish would blog)

To have a chance to win this giveaway, in comments name or put up a link to a writer blog you like to visit (or, if you can't pick just one, toss your name in the hat) by midnight EST on Saturday, December 20, 2008. I'll draw one name at random from everyone who participates and send the winner the box of six books by my blogpals + the bonus books, plus an extra stocking stuffer -- a signed, printed* copy of my December Darkyn novella e-book release, Master of Shadows. This giveaway is open to everyone on the planet, even if you've won something from PBW in the past.

*Printed by me on bond paper and placed in a three-ring binder.
Posted by the author at 6:40 PM