Having a tasteful, cohesive look for your novel series is really an important aspect of marketing your books. I've been very fortunate with the Darkyn series cover art, and I've been able to contribute to the process by making suggestions, such as the deep violet color theme for Evermore's cover art and selecting and submitting the image used for the e-book cover art for Master of Shadows.

When I was sent the art for the seventh and final novel, Stay the Night, I considered it my favorite cover of the series. It was a little different than the other books, but the depiction of Robin of Locksley was just about perfect and the warm browns, ambers and violet color scheme fit in with the rest of the books. It was gorgeous, and no one could possibly screw it up.

Evidently that faint sobbing sound I heard while I was congratulating myself was actually Jesus, weeping.

The last digital version of the cover art I was sent about a month ago remained in the original colors. I didn't see the final edition cover art for Stay the Night until the day before yesterday, when a copy arrived for the holiday auction. I was expecting what I had been shown, but at some point during the production, someone in NY decided Robin of Locksley would look better depicted in pink. 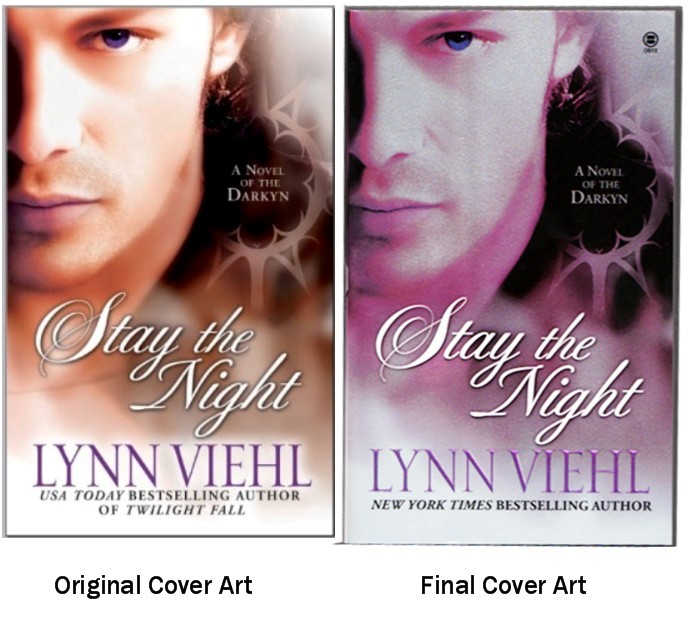 Yes. You heard me. Pink. It's not just pink, either. It's bright, florescent, metallic pink, with no trace of any of the original colors.

I won't waste your time by describing my reaction (just imagine the biggest explosion you've ever heard, triple it, and you'll have the general idea.) Now I have to decide what to do about it.

Maybe you guys can help me. If this debacle was your headache, would you:

1) Spread a rumor that pink is the new black.

2) See if Mattel wants to consider the series as a possible Barbie franchise.

3) Weep until you rupture your tear ducts, go blind and don't have to look at the damn thing anymore.

4) Lie to all your readers and say that Robin is actually gay but you forgot to mention it in the novel.

5) Run around the U.S., buy all 50,000 copies, and burn them on the sidewalk in front of your publisher's headquarters.

5b) Run around the U.S. with 50,000 paperback-size copies of the original cover art and a really big bottle of glue.

6) Send all of your readers a Pepto Bismol promo widget (tablet with instructions to chew it before they look at the cover.)

7) Apologize to the author of whatever book you considered to have the most inappropriate cover art you've ever seen.

8) See if any of the chicklit writers will help you promote the book.

9) Call the new color theme "rose" instead of "pink" and say Robin is depicted as "melanin-challenged" instead of "an albino."

10) Be thankful that whatever idiot did this to your book decided to use pink instead of jaundice yellow, which surely would have done you in once and for all.

11) See if Suzanne Brockmann can spare some of those happy face stickers she handed out to her readers when they screwed up one of her covers (also see if she has them in jumbo size.)

12) Deny you wrote the book at all. Blame it on Alison Kent and let her answer the angry hate-mail.

12a) I think Alison would do that for you.

12b) If she doesn't see the cover art first.

13) Hire Pink to write and perform a promotional theme song for the book.

14) Send all of your readers free sunglasses as holiday gifts, as they will definitely need them on January 6th.

15) Start wearing a pink T-Shirt that reads, "Six out of Seven Ain't Bad."

16) Hand out free copies of the book with a stick of bubble gum tucked inside.

17) Accept it, as the book is already shipping as you write this.

17a) Accept it means you can't go all anti-pink now just because some moron ruined your cover art.

17b) Publishing is publishing, and with the frequency with which they screw up eventually you'll have to live with only black and white.

17c) And stop thinking even that would be better than this cover, you ninny.

18) Tell the readers before the book hits the shelves because they should hear it from you instead of reading about it as the January feature story on CoverArtHatchetJobs.com.

19) Request the publisher use the original cover art for any future print runs without calling them all the names you're thinking in your head.

20) Burn a copy if it makes you feel better, take a deep breath, and move on.

What do you guys think?