As you've probably noticed I've posted on the blog my word count widget and unofficial badges for NaNoWriMo 2014. This week I'll be putting together my novel notebook and doing the last bit of prepwork I need so I can begin writing straightaway on November 1st. I'm also available as a writing buddy on the NaNoWriMo web site; if you want to send a buddy request my user name is Lynn Viehl.

The idea I've decided to go with for my November novel is the first book in a historical romance trilogy that I've always wanted to write. The primary setting for the entire trilogy is Netherfield, one of the great estates from Jane Austen's Pride and Prejudice (you might remember it as Bingley's home.) I've always thought Netherfield had great potential as a magical place for romance, mystery and adventures, and I want to tell some new stories about it with new characters and conflicts of my own creation.

Here's the cover art I worked up and the beginning of the synopsis: 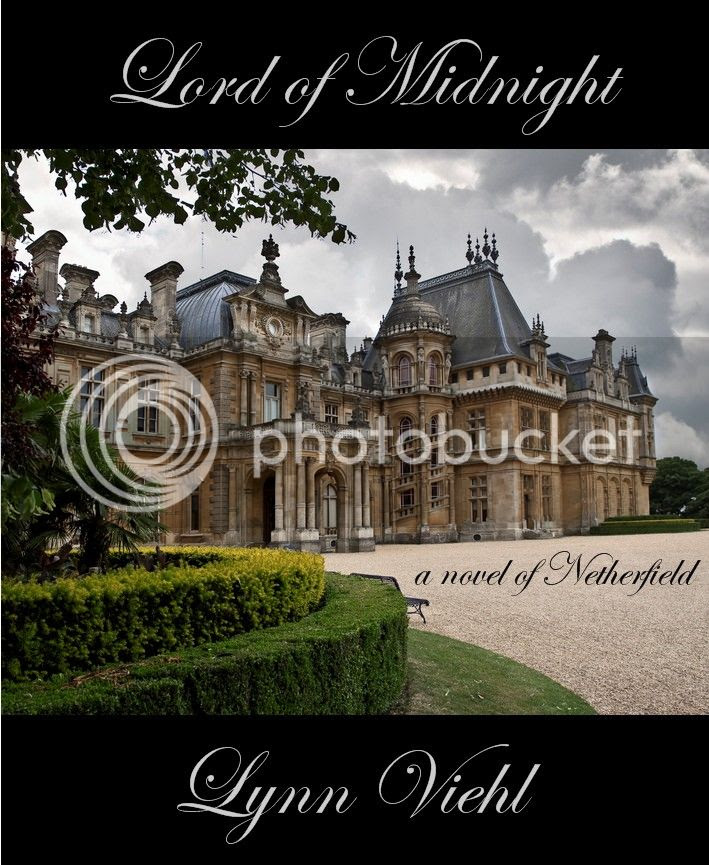 The Novels of Netherfield
Book One Working Title: Lord of Midnight (Yeah, I know, uber generic, which is why it's a working title)

Rumors sweep through the village of Meryton as Netherfield Park is let at last to Colonel Julian Greville, a retired soldier recently returned from India. No one knows any real details about the colonel except that he is rich, reclusive and never seems to sleep. His residence soon causes much displeasure among Meryton's finer families, particularly those with unmarried daughters. Local legend maintains that anyone who spends a night at Netherfield will fall in love -- but the colonel refuses to accept calls from anyone.

A carriage mishap strands Miss Anne Maycott at Netherfield, where she is obliged to spend the night. Colonel Greville is kind and attentive, but he also puzzles her, for he takes no pride in his heroic past. Greville is exqually perplexed by Anne, who seems too good-humored and is far too lovely to be on the verge of becoming a spinster. He's also disturbed by the accidents that have regularly plagued Anne's life; far too many to be mere coincidence or, as she believes, bad luck . . .

So what are you planning to write for NaNoWriMo 2014? Let us know in comments.
Posted by the author at 7:00 AM