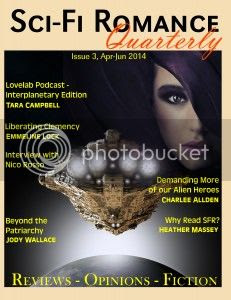 Yesterday I mentioned a sub op from Sci-Fi Romance Quarterly, an e-zine I discovered via the Paying Markets forum on AbsoluteWrite.com. Because it's extremely rare to find a paying market for any type of SF romance, I decided to do a bit more research on the pub. That resulted in me asking Diane Dooley, SFRQ's fiction editor, a lot of pesky questions, which she very kindly took the time to answer:

Q: What made you decide to embark on this venture?

A: KS 'Kaz' Augustin, Chief Editor of the Quarterly, tech goddess and businesswoman, approached myself and Heather Massey of The Galaxy Express with a wild idea: are you two nuts enough to collaborate with me on a quarterly magazine dedicated to Science Fiction Romance? The answer was yes, we are nuts enough. I had recently served as content editor for an anthology of SFR short stories and was interested in providing a paid market for SFR in the short form. Jumping aboard the Quarterly gave me that opportunity.

Q: What can readers expect to find in a typical issue of SFRQ?

A: Kaz kicks off the issue with an opinionated editorial on some aspect of SFR, followed by a new release round-up, several honest reviews from our much-loved review team, as well as regular columns like Scopebox by Charlee Allden, Mistressworks by Ian Sales, and The Cosmic Lounge by Heather Massey. There will usually be an opinion piece by a guest columnist, an interview with an SFR author, and, of course, an original piece of SFR short fiction.

Q: What sort of SFR stories would you love to see submitted for consideration? What sort of stories don't you want to see?

A: Fresh, original, emotionally engaging stories that blend the Science Fiction and Romance genres seamlessly -- that's what we want. We'd love to see more submissions with PoC characters and/or from non-Western perspectives.

Stories we're not interested in seeing? Ones that ignore the requirement for an upbeat ending for the romance arc. We've received (and rejected) several otherwise excellent stories that did not have an emotionally satisfying ending. Neither are we interested in stories that neglect the world building. The story must clearly be science fiction.

We have a primarily female readership, and one of the things they love about SFR is the variety and complexity of the heroines, so we have a preference for female characters with agency. 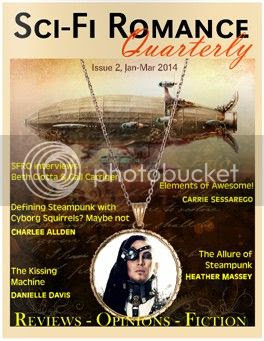 Q: In your FAQ on the SFRQ website, you define SFR as "a romance that takes place in a technological setting and has an upbeat ending." Do you expect all submissions to strictly adhere to this definition, or are you willing to consider stories that define SFR differently?

A: The story must have an upbeat conclusion for the romance arc, either a 'happy for now' or a 'happy ever after' ending. Otherwise, we are open to whatever wonderful thing the author comes up with.

The "technological setting" phrase is to provide a guideline for certain sub-genres that straddle a couple of different genres. Steampunk, for instance, or time travel, might lean towards the historical or fantasy genres. The basis for an SFR story should be technological rather than magical: a new invention or a time machine, rather than a magical portal to another world.

Q: Do you have any objections to submissions of SFR stories which feature non-traditional romance characters (i.e. members of the LGBTQ community, non-humanoids, artificial lifeforms, etc.)?

A: No objections whatsoever. We've received submissions of all of the above and would love to see more.

Q: What do you see in the future for SFRQ?

A: We hope to see solid growth in our readership. We made a unanimous early decision to fund the magazine through advertising rather than crowdfunding. Our future growth, then, is what will keep bringing us sponsors (as we refer to our advertisers). Kaz, Heather, and I are unpaid. The money we raise via advertising goes to pay the authors of the fiction we publish and each issue's cover artist . So far, we have raised our flat rate once, and have recently raised our rate again to 2 cents/word. We have also started commissioning paid original cover art. We would love to be able to offer pro rates in the future, but we don't intend to run before we can walk.

Our goals are to provide an entertaining and thoughtful magazine for fans of SFR, a targeted advertising opportunity for SFR authors and publishers, a viable short story market for writers, and a paid showcase for cover artists. So far, we're meeting our goals and having a hell of a lot of fun along the way.

Which is exactly as it should be. My thanks to Ms. Dooley for taking the time to answer all my Q's, and to the entire staff of SFRQ for opening up a new market for SF romance writers.
Posted by the author at 7:00 AM