To Drawer or Not to Drawer

November 30: You found it in a drawer -- Judy Reeves, the revised edition of A Writer's Book of Days

As a youngster I wrote stories that I never showed anyone. I imagined them, scribbled them down, put the pages in a folder and hid them in the bottom drawer of my dresser. I did this until there were so many folders in the drawer that there was no room for clothes on top to hide them. I moved my folders to a cardboard box and stuck that under my bed, at least until that box filled up and I had to get another, and then another, and finally there was no more room under my bed and I had to put the boxes in my closet.

At this point the two sisters with whom I shared my room began (quite understandably) to get very annoyed with all the space I was hogging with my boxes. My grandmother helped me move some of them into the attic, and my mother bought me an old used typewriter, which helped condense my scribbled stories into smaller batches. Still, when I finally grew up and moved into my own place, I brought with me about forty boxes just like this one: 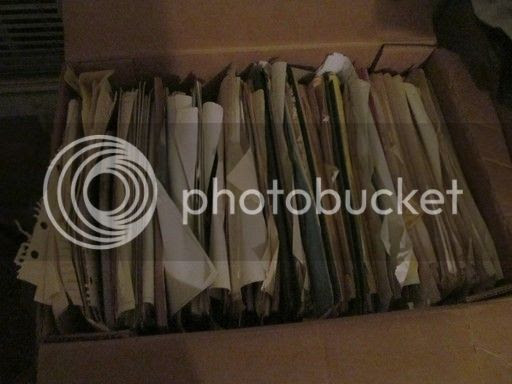 For the past twenty-nine days you NaNoWriMo'ers have been writing your November novels and hoping to cross the finish line today. Many of you probably have already won; some of you may end this effort with less than 50K. Whatever your expectations were, and wherever you finish tonight with your story, however, you should feel proud of what you've accomplished. It takes a lot of courage and determination to make a dream into a story.

You may also be thinking about what you'll do in the future with your NaNoWriMo novel. Over the years here at PBW I've talked about editing and rewriting and other ways to improve a story, and I encourage all of you to keep working on your book in the weeks and months ahead. If you can do this much in a month, think about what more you can do in three months, or six months, or a year.

There's also the question of what drawer you'll hide it in. Yes, some of you will never show this story to anyone, and that's okay. You have the right to keep your stories to yourself, if that's what you really want. Put them in a drawer, stick them under your bed or in your closet, and they'll be safe, and you'll be safe, and no one ever has to know about them. You'll never have to deal with rejection or criticism; you can write for your own pleasure. You're absolutely allowed to do that.

So what's the point? Well, if all writers did that -- if we hid everything we wrote in drawers and boxes and refused to let anyone see them -- there would be no books in the world. There would only be drawers filled with folders and boxes stuffed under beds.

How did you do with NaNoWriMo this year? Let us know in comments.
Posted by the author at 7:00 AM