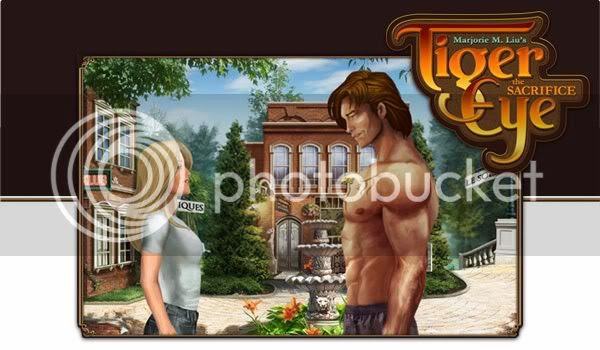 Tonight Passionfruit Games e-mailed me a heads-up on the release of Tiger Eye ~ the Sacrifice, a computer game based on Marjorie Liu's romance novel of the same name. If you remember how much fun I had with the first game, Tiger Eye ~ the Curse of the Riddle Box, then you know how tickled I am to have the next one (I just started playing it tonight and I'm already having a blast.) If you already own the first game, want the second game or would like to find out more about them, Passionfruit Games has all the info you'll need on their web site here. Meanwhile, I'm going to play through the new game and then write up another post with more on the gaming experience. 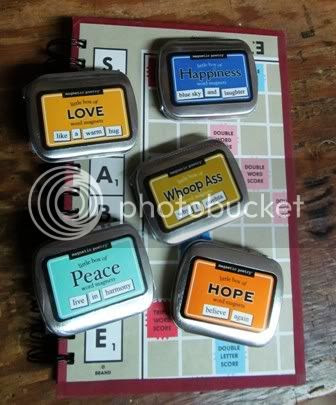 Helpful things often come in small packages, as I discovered when I made a trip to BAM yesterday and found Magnetic Poetry's latest delight, little boxes of words.

The palm-sized tins, which contain 72 words to play with, each have a specific theme. I picked up one of each that BAM had in stock: happiness, hope, love, peace, and (my personal favorite) whoop ass. Later that day -- when I definitely felt like whooping some ass -- I got the tins out of the bag. What I really needed an inoculation of hope, though, so that was the one I cracked open.

72 words aren't a lot to work with, but in a few minutes I put together a quick poem about something I believe in that always gives me hope (me and my guy). While it didn't transform me into Julie Andrews singing the hills are alive, and my impromptu verse won't be winning a Pulitzer, once I had arranged the poem on my board I actually felt a little better. At $5.99 per tin MagPo's little boxes are a bit pricey, but they're certainly cheaper than a therapist.

As always you don't have to take my word for it. In comments to this post, name something you'd like MagPo to use as a theme for one of their little boxes (or if you can't think of anything, just toss your name in the hat) by midnight EST tonight, April 13, 2012. I will draw four names at random from everyone who participates and send the winners one of MagPo's little boxes along with a signed copy of Nightborn, my latest release. This giveaway is open to everyone on the planet, even if you've won something at PBW in the past.
Posted by the author at 12:00 AM