Once or twice a year your creative muse goes off on a jaunt, leaving you with a blank design wall and a blank mind, wondering where your next idea is going to come from. -- Rayna Gillman

Lately I've been working on preparations for the piece I hope to enter into an art quilt challenge. I have several techniques I want to use, including two I invented myself. I have all the materials I need. I even have little experiment pieces I'm making to test out how to put it together. But the design itself, the most important part of the piece? I couldn't figure it out. Everything I put on paper looked too busy, too complicated, too overdone.

I got to where I stopped sketching because everything I drew sucked. After twenty-odd years of designing and sewing I actually had a horrendous case of quilter's block.

I put aside the project last week, and in hopes of clearing out my head, I decided to do something different. For this I consulted my April/May 2012 issue of Quilting Arts magazine, in which I found Rayna Gillman's article, Stitch Therapy. First thought: Do these editors have me under surveillance?

I dutifully read the article, and I didn't like it. To summarize the technique it described, you're supposed to just sew a bunch of free-cut, random strips of scrap fabric together. No rulers, no templates, no pattern, no specific type of fabric, no color choosing or matching. Just cut and stitch. Like quilting could be organic. The author called it playful sewing.

You guys know me. As a writer I'm ruthlessly pre-planned and organized; as a quilter I'm even worse. Playful sewing? Please. I have my entire stash color-coded. I've cataloged my quilting magazine and book collections. I've even alphabetized my templates (okay, and cross-indexed them by size and shape.) I do not play, baby, I sew. And this is my biggest creative stonewall: I have to have everything perfect and prepared and figured out ahead of time.

Of course I know the universe wants me to color outside the lines, so I decided I probably needed some stitch therapy and went ahead with doing a project based on the article.

It's very tough to break old habits, and I won't say I had a great time putting together this piece. I kept trying to color match my scraps, cut them into uniform-sized strips and then sew them together in straight rows. I had to toss out four blocks before I finally got the hang of the no-technique technique. As I was making them I could see that the blocks were all over the place. The crooked seam lines and insane colors made my right eye twitch. But when I finally put the blocks together and had a complete piece, it surprised me with how fun it looked: 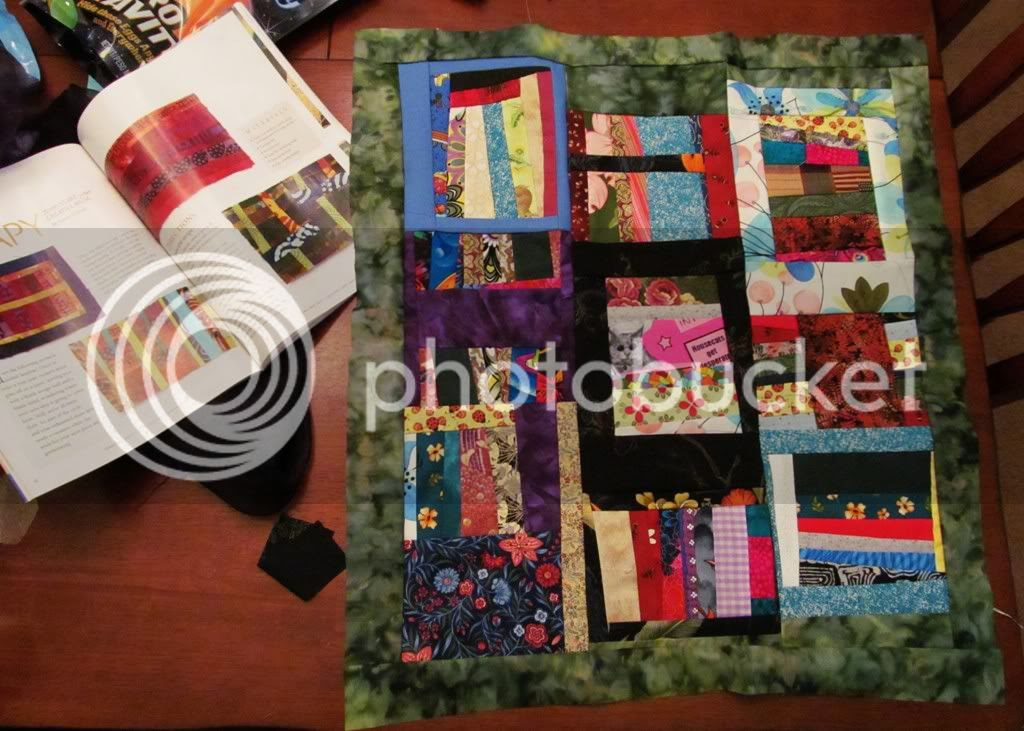 It's fresh, bright, and not like anything I've done before. It's nowhere near as good as the author's examples, and it's not going to win any awards. But it's still rather neat. Much as I hate to admit it, I'm looking forward to quilting and finishing the piece.

While I was doing the stitch therapy, I was also thinking about my challenge piece. I have been obsessing over the composition when it's the techniques that I want to showcase. To show a technique clearly and communicate the idea to as many people as possible, the ideal way to go is with an easy-to-understand example. I realized I'd been over-thinking the design. Rather than doing a hugely sophisticated piece with all the bells and whistles, I needed to step back and keep it simple.

I still don't know what my challenge piece design will be, but I have some new ideas. I also know I need to back off on the designing and think more about communicating. Stitch therapy didn't give me all the answers, but what it did was put some distance between me and my problem, and provide the chance to step outside my lines and think in a different direction. Which is where I know the answers can be found.

Right now you may be suffering from the same problem with your writing. You have all these ideas and yet you can't make them work. Everything is too complicated. One thing I've always recommended to writers who are blocked is to stop working on what's not working and do something different. It doesn't have to be a novel; write a short story. Set it in a genre you've never tried before now; if the story you're blocked on is a romance try writing a SF story, or an urban fantasy, or a YA. If you hate vampire stories, write a vampire story. The idea of story therapy is to step outside yourself and play for a short period of time. What you produce you may never be able to sell, but as with my stitch therapy project, it may get your head in the right place to go back and solve the problems with the work you do want to sell.
Posted by the author at 12:00 AM

Labels: color outside the lines, ideas. the writing life, quilting