Let's pretend this photograph is a scene in a story: 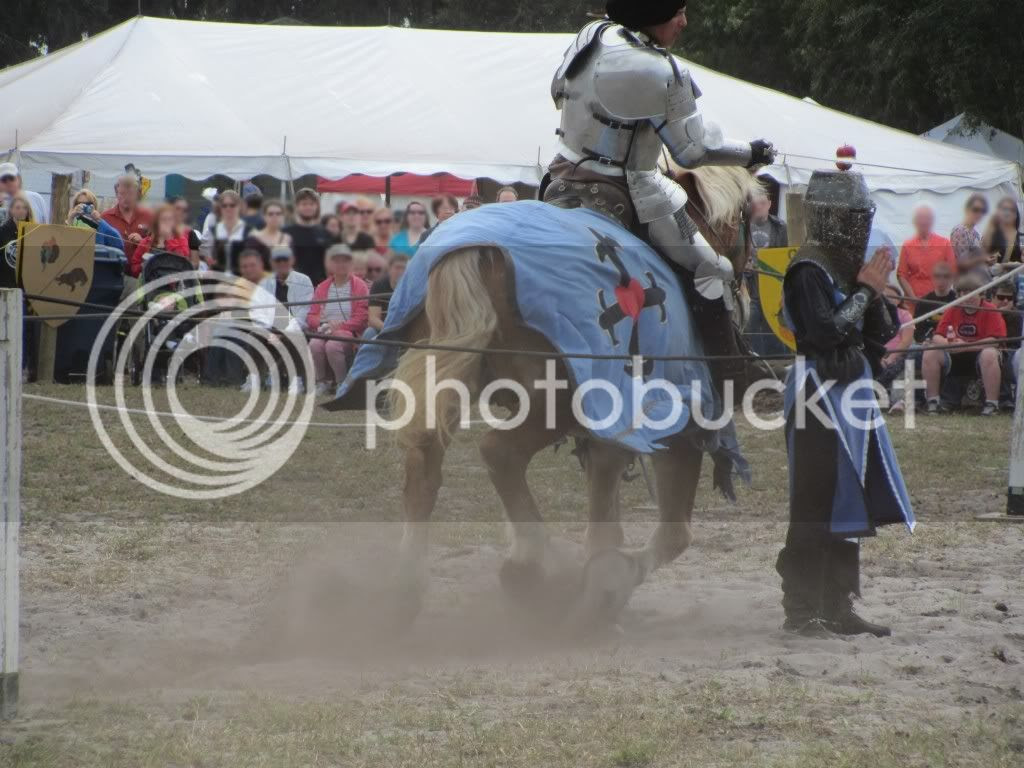 We'll assume that the Renfaire is the setting, the guy on the horse is the protagonist, the guy in the helmet praying is a secondary character, and all those folks in the background is the rest of the cast. As snapshots go I think the action in this one is fairly self-explanatory. All we have to do know is figure out why this is happening.

At first glance things in the photograph do seem a bit busy -- there's a lot to look at. To make the scene more interesting and give it more impact, the first thing I do is narrow the focus and weed out anything that is unnecessary. I do the same thing with a photo by cropping: 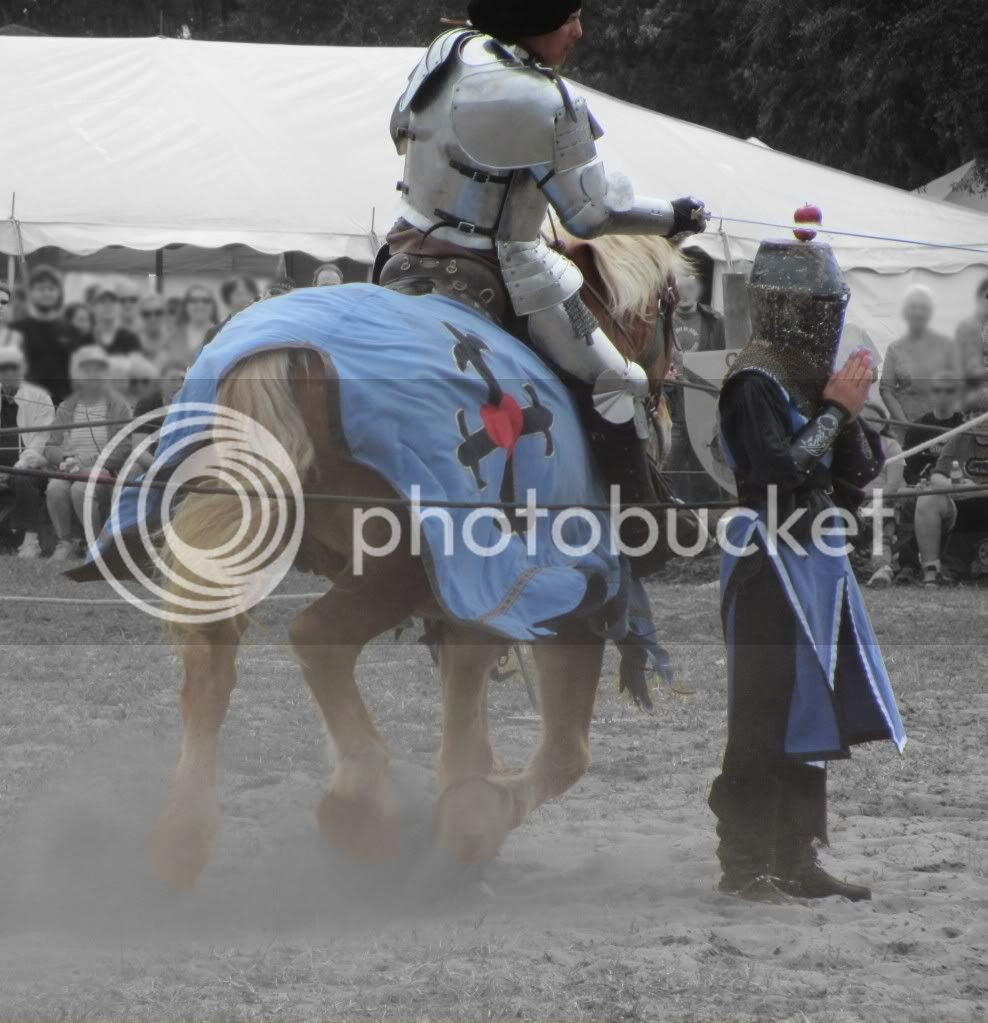 Now it looks a little better, although I felt all those colorful folks in the background were also a distraction, so I toned them down as well by making them black and white (and the facial blurriness among the crowd is also intentional.)

My photo now focuses on the two primary characters and what they're doing. But why is the guy on the horse swinging his sword, and why is the other guy praying? Let's take a closer look: 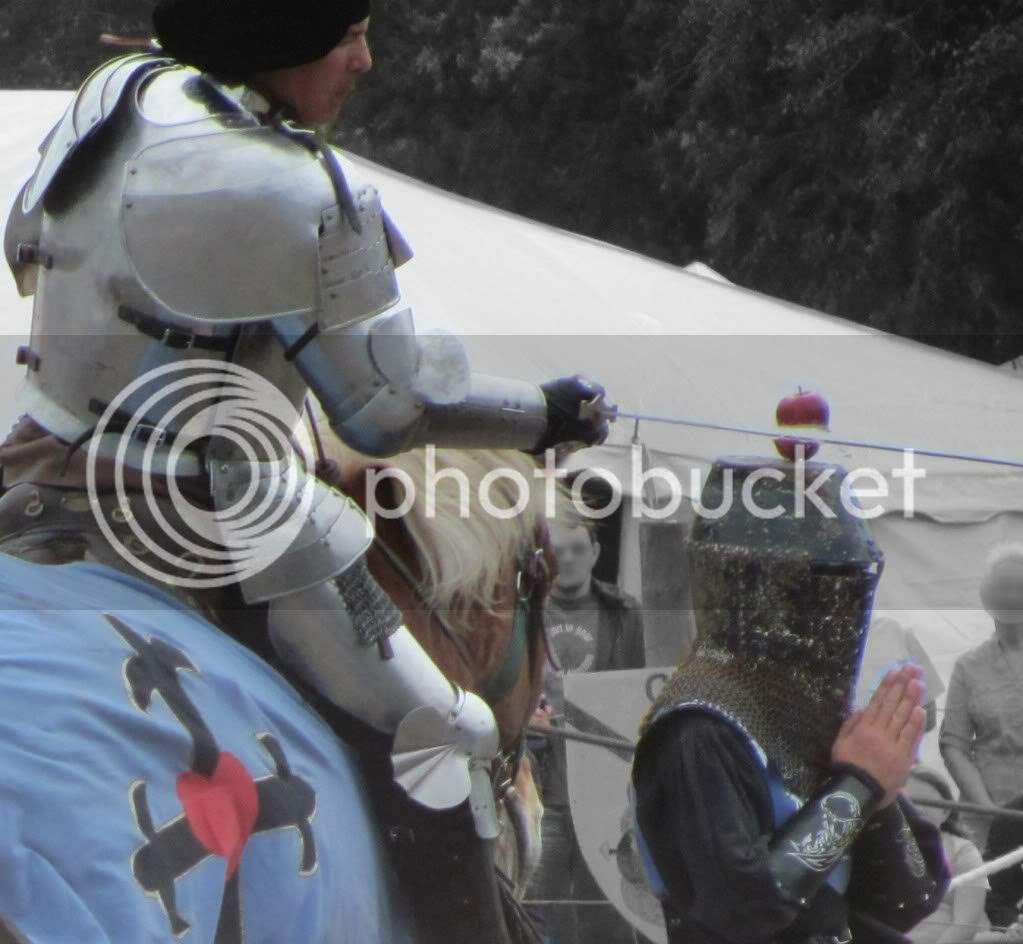 This is the aha moment of the photograph. The protagonist isn't attacking the secondary character; he's taking a swing at an apple on the guy's head. And he's doing that because he wants to . . . 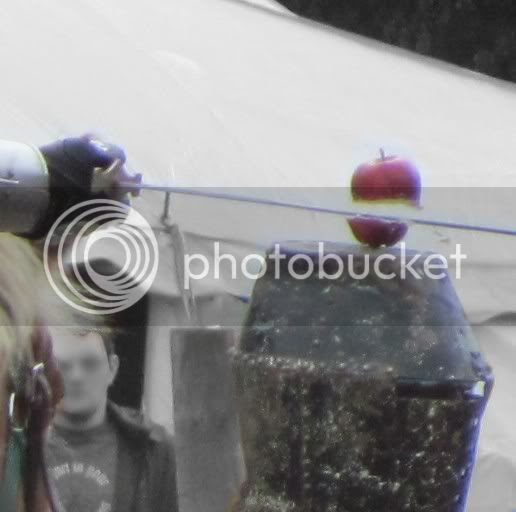 . . . chop the apple in half, of course (and don't ask me how I managed to snap this photo at the precise moment the apple split in two; it was pure dumb luck.)

A scene should illustrate some part of your story as clearly as a series of photographs. When you put together a scene, you need characters, setting, action, and a point to the whole thing. To communicate these to your reader, you need to focus on what is important and enhance that -- while not cluttering up the scene with a lot of unnecessary details.

Here are some scene-focus question to ask yourself (and you can ask these at any time, before you start writing, while you're writing, or when you're editing):

Who's in the picture? Consider how many characters you're showing to the reader in this scene, and determine if they're actually serving a purpose. If they're just standing around do nothing, they're a distraction that can clutter up up the scene and slow the pacing. Put them to work or get them out of the spotlight. You don't have to get rid of all your background characters, but don't shift the reader's focus to them by making them too prominent or colorful.

Who needs to be the main attraction? How are you showcasing the characters who are important in this scene? Are they front and center in your scene, or are they wandering around getting lost in the crowd?

What's happening in this scene? Unless you're writing some abstract literary piece, the reader generally needs to clearly understand the action that occurs. But don't fall in the trap of telling the reader too much via info dumps or As You Know Bob character monologues. When we're watching a scene like this, we don't need to know how much the horse weighs, where it was foaled, the name and home village of the smith who forged the armor, etc.

What's the point? There should be the equivalent to an apple getting sliced in half. It's the reason all of this is happening, and even if you're not ready to come out and explain it to the reader, it still needs to be somewhere in your scene because it is the point.

Got any tips that you want to share on how you keep your scenes sharp and focused? Let us know in comments.
Posted by the author at 12:00 AM