Just an FYI before I get started: I'm going out of town today, so any comments you try to post will not show up on the blog until I get back tonight to approve them.

Three days ago my guy (who himself was out of town) called to tell me he would be home by early afternoon on Friday. I promised to make something for dinner he could warm up, this because he is never on time for anything.

I'm not exaggerating; the man is has a chronic case of punctuality phobia, and cannot be relied upon to show up when he says he will, not even when I went into labor with our daughter (for that one I almost had to drive myself to the hospital.) It used to be a point of contention between us because like most men my guy always assumes he's right, but now we just laugh about it.

Sure enough, late Friday afternoon I got another call from him: "I haven't left yet, but I will as soon as I yada yada yada." So my kid and I went out to get her hair cut and have some dinner we didn't have to cook, because I had the feeling he wasn't coming home at all that night. Soon as we got home the phone rang and it was Mr. Tardy again: "Honey, I'm still here, and it looks like I'm going to have to stick around another night . . . "

I'm not always right about things, nor do I have to be, but I love it when I listen to my instincts and they turn out to be right on the money -- even when I have to wait a few decades for the satisfaction.

Here are a couple of other Ahas I've recently enjoyed: 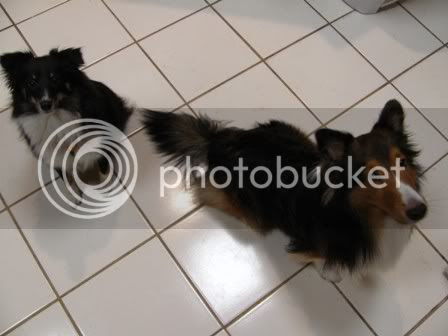 Skye's Problem isn't a Problem: We've had no problems with our new pup, Skye, except that she hasn't gown much. I've had a lot of dogs in my lifetime, and for the last 22 years at least one of them has been a Sheltie. Raising three from pups and reading every book about Shelties I could get my hands on, I can say I'm pretty familiar with the breed. So when the vet told me Skye seemed to be having growth issues, my instincts all but yelled "Wrong."

I did agree that Skye was too small for a Sheltie, but other than her size she was healthy, lively and normal. There were some things about her that didn't make sense, such as her bark (which sounded funny), her muzzle (too short) and her fur (far too silky for the breed, and it was growing out weird, too.) She had the right markings, and most of the physical characteristics, but her personality was all wrong. Mostly she reminded me of Penny, my grandmother's chihuahua, who lived with us when I was a kid.

The vet eventually decided that my pup was a malformed runt; this largely based on Skye's papers, which classified her as a purebred Sheltie. I decided to find someone else who knew more about Shelties than either of us, and hunted around until I met a terrific lady who bred Shelties for thirty years, and sent her pictures of Skye along with a list of the things that seemed odd about her. We agreed to meet at a local dog park so the lady could have a look at her in person.

As soon as the lady saw my girl she recognized the problem at once: Skye is not malformed, a runt or even purebred Sheltie. She's actually a Poshie -- a new designer breed that is half Sheltie, half Pomeranian. She's not going to get any bigger because eight pounds and twelve and a half inches is her adult size. The lady also speculated two sets of papers or two pups might have been accidentally switched at some point before I adopted Skye. So now I have to read up on Poms because all I know about the breed is that (like my Skye) they are adorable. 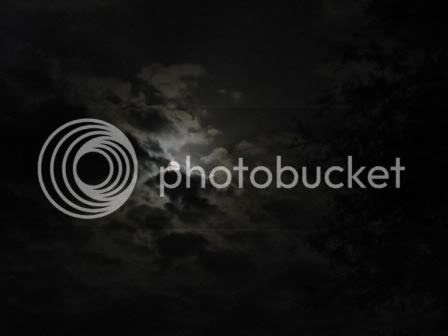 Night Photography: Back when I started playing with point-and-shoot digital cameras a friend with more experience told me I'd never be able to shoot anything in low light or at night with a point-and-shoot because the camera wouldn't focus. For that I needed a much more expensive camera with professional settings, special lenses, etc. etc. I thought it was just a matter of figuring out the right setting and angle along with much patience and practice.

I've tried to photograph the night sky when the moon is full for years with no success. I didn't give up, though, because digital point-and-shoot cameras are getting better every year, and sometimes I nail shots that under the circumstances I shouldn't have. Cameras make me believe some technology is a little magic. Besides, I could just delete all the blurry shots with the press of a button.

The other night the full moon was so lovely I had to have another go at it, this time using the landscape setting on my Canon, It's a pain because you have to hold the camera perfectly still for several seconds while the shutter does its thing. I knew it was too dark, the clouds kept dousing the moonlight, and the first couple of shots I took were blurred. The third, however, was not, and I finally got my spooky Aha full moon pic here. 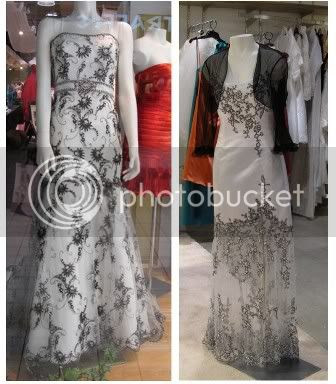 Goth Wedding Gowns: Even when I was a little kid I thought white wedding gowns were boring. Also, hardly anyone looks good in white, except for African-Americans and other dark-skinned people, who actually look pretty fabulous in it.

As a teenager who went Goth before there even was such a thing as Goth, I told my mother when I got married I was going to wear black. After Mom smacked me in the back of the head, she told me that wearing black was for funerals, brides always wore white, and pigs would fly before anyone designed wedding gowns with even a hint of black in them.

Many years and a few husbands later I flouted convention by getting married in a black-and-white dress. It was not a wedding gown, but it was what I wanted to wear, and since that marriage happened at the JoP no one fainted in horror. It made me very happy, but I admit, I didn't show my mom the pictures because I didn't want to get smacked in the head again.

The other day my daughter and I stopped at the display window of a bridal shop, which featured a white gown lavishly trimmed with black embellishments. We went inside and saw another black-and-white gown, and that one even had a sheer black skirt. I thought they might be new/trendy bridesmaid's outfits, but no, the shopkeeper assured me that they were actual wedding gowns. I know she didn't understand why her answer made me laugh so hard.

One of the most important things you can do as a writer is to listen to your instincts, especially those that everyone else tells you are wrong. Innovation generally doesn't happen when you follow the herd, because the herd doesn't like new things. Anything untried or risky threatens most groups because they stay safe by doing everything the same way. It's why we call them herds.

In some ways they're right. Unless you're psychic, your instincts are never right 100% of the time, so taking a new direction or doing something different won't always pan out for you. It is always a risk, and it may cost you. It will always teach you to think for yourself versus going along with what you're told is acceptable or correct, something that people who want to blend in should definitely avoid.

Twelve years ago I was told my novels would never become bestsellers. I was also informed -- repeatedly -- that I was an idiot for giving away original work as free content online. Imagine if I had listened to those who assured me that as a female author I'd never get a lengthy SF series published, or that I would never get my vampire fiction into print because no one wanted to read about vampires, and that I should only write in one genre (romantic suspense) because that was the only way to build a proper readership. Alas, poor Jessica Hall, if she had been my only incarnation she'd probably be working in a library now.

It's great that in each of these cases the no-no-no people were all wrong, but if I hadn't followed my instincts they would have been right. I never would have tried to do otherwise -- and that's why those Aha moments are the best of all.
Posted by the author at 12:00 AM