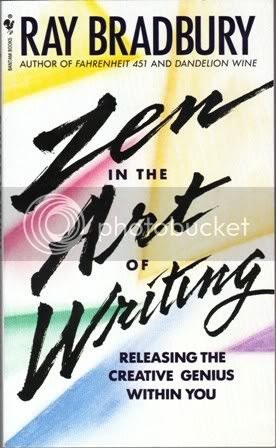 Ray Bradbury just finished running me over again this morning. So to speak. I'm reading his Zen in the Art of Writing, a collection of his essays on the craft, some dating back to the year on my birth certificate. I'm about halfway through but I'm not rushing; I like what he says too much to skim.

The book is mainly memoirish -- as with most famous writers, it's all about them -- but Mr. Ray is utterly in love with the craft, not himself, and passes along enough practical advice that I don't mind the autobiographical framework. For the record, I have read Farenheit 451, The Illustrated Man, The Martian Chronicles and part of Something Wicked This Way Comes, and so far I've enjoyed getting some of the behind-the-scenes details from their author.

As for book's content, it is about writing, and art, and lots of other interesting things, but Zen? Not in the slightest. Ray Bradbury is about as Zen as a highspeed carnival ride -- one that is either about to go careening out of control and smash through all the safety gates, or has some alien component ready to vacuum your brains out of your skull at the moment your adrenalin spikes. Great book, very high energy stuff, completely inappropriate title.

Mr. Ray also reminds me of a story I want to write someday, one that begins with something my mother used to say to me whenever I complained about having two brothers, two sisters, and absolutely no privacy: My great-grandmother had twenty-one children, and they all lived. Mom's strict Catholic upbringing and love for big families always colored this statement with awed approval, but even when I was very little that last part always sounded ominous to me: . . . and they all lived. Like they shouldn't have but did anyway. And the pattern-lover in me would then kick in: What if all 21 of them had 21 kids, and they all lived to have 21 kids, and they all lived to have 21 kids . . .? One time I got out a calculator and discovered that in just five generations great-great-great Gran would end up with just over four million descendents.

At which point the storyteller in me kicked in with: What if the original 21 were only part human?

I've always had mixed feelings about Ray Bradbury's work, probably most about The Martian Chronicles, which I read when I was still young enough to be believe that life was fair and if you worked hard you would be appropriately rewarded (thus my younger self thought that book was just plain mean.) In his other works Mr. Ray has charmed me one minute and disturbed me the next. He's also shaken me up quite a bit; "The Veldt" still holds a top spot among the scariest stories I've ever read. Even when he's not ripping apart clueless parents, it's safe to say that Mr. Ray is definitely not a comfort read.

I also know Ray Bradbury's work has influenced my own; when I decided to write about characters with superhuman abilities symbolized by the ink on their skin I first thought of The Illustrated Man, and how he used tattoos to tell the story. We share a love/hate relationship with carnivals, something that resulted in my trunk novel Night of the Chameleon. Even back when I thought Mr. Ray was mean, he may have initiated the evolution of my dislike of the mindless HEA ending. I think the mark of a great writer is when their stories stay with you long after you read them, and I suspect his will never leave me alone.

As always, you don't have to take my word for it. In comments to this post, name a writer you think has influenced your work, and how (or if you're above the influence, just toss your name in the hat) by midnight EST on Saturday, January 8, 2011. I'll pick three names at random from everyone who participates, and send the winners an unsigned copy of Zen in the Art of Writing by Ray Bradbury. This giveaway is open to everyone on the planet, even if you've won something here at PBW in the past.
Posted by the author at 12:00 AM