Writers generally have to keep track of a lot of characters, and none have more to track than series writers. I have at least seventy notebooks filled with name lists, character worksheets, backstory ephemera, seemingly endless timelines, body model images and art, related relationships, titles they've appeared in; you name it, I've written it down.

Because I'm maxed out on storage for this kind of thing, and I'm always interested in getting more efficient with organizing story elements, I've been looking around for a freeware program that would allow a writer to record all this character data in something like a genealogical format. I figured that using the genealogy approach would be logical (characters may not be real, but they're still people), easy to access and use, and simple to manipulate in order to build fictional records and trees. None of the ones I've found thus far allow much more than stat-type info (birthdates, marriages, offspring, etc.) to be entered into the database, all good info but too scanty for what I need.

GenJ, designed by Nils Meier, may be just what I was looking for. Looking at the screenshots page, I already see four different things I already want to use for my series characters. It also works for Windows, Mac and Linux, and under GNU General Public Licence you can modify the software (beyond me, but I know lots of much smarter people who could play with it.)

I photoshopped this to show an example of how I would use the record editor to set up a character data sheet in the pre-built GenJ: 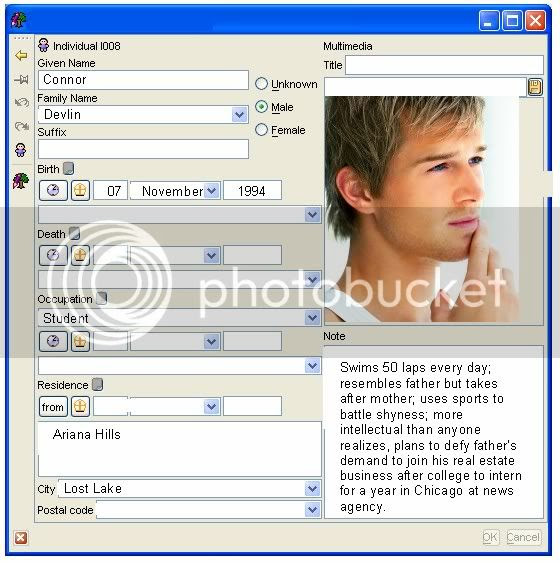 Even without modification, this works pretty well for a brief character outline. The notes section on the bottom right makes a great place to jot down important biographic bits. I also like having the upper right hand space for an image; that could double as a spot for cover art, author sketches, a tattoo design or some other character-related graphic. It wouldn't take a lot of time to create a record like this for all the characters in a novel. The other cool thing about it is that you can download it in English or several other languages like German, French, and Spanish.

Bill Peschel mentioned something in comments last week about being insanely busy and never having time to test these freeware programs, and even though I'm the one who finds them I know I'm usually in the same boat. In keeping with 2011's theme I'd like to change that, and while I can't personally test every freeware I find, I could surely do one or two a month. This is why I'm considering trying out GenJ myself so I can see how it works in unmodified form as a character outliner and data compiler. Then if it does work like I think it will, I can do a mini-workshop on it or maybe put together an e-book with instructions and suggestions.

What do you all think? Worthwhile experiment, waste of time, other? Let me know in comments.
Posted by the author at 12:00 AM