I hope to be the kind of person my dog thinks I am. ~ Unknown Author

I've always had dogs in my life. The only time I haven't lived with a furry friend in my home was when I was in the military, and traveled too much and worked too many weird hours to take care of one (which was propbably why I spent so much time with my parents' pups whenever I went home on leave.)

I am equally fascinated by other people's dogs, and over time have become a secret/sneaky photographer of them. Seeing dogs and people together sometimes gives you a little insight into their personality -- both human and canine. 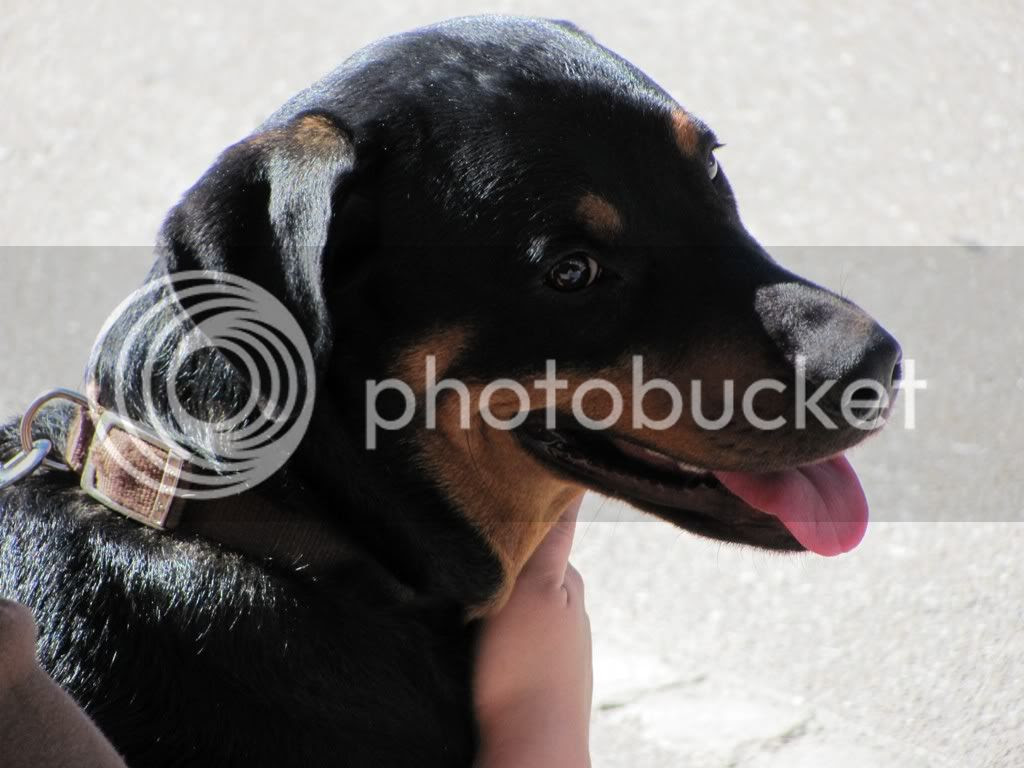 This pretty girl and I met in town, and I had the chance to discreetly observe her and her owner for about an hour. Both were laid back, down-to-earth types who looked like they handle just about anything life throws at them: strong, content, not easily intimidated. From the casual affection of the owner and the relaxed adoration of the pup it was obvious they'd been together for years.

The most charming thing was seeing how the owner handled the pup -- with quiet voice commands or a brief touch on the head or neck -- and the dog's slow but good-natured response. Despite the breed's rep (these are powerful, muscular dogs) every rottweiler I've ever met has been a big sweetheart, and always seem to have a glimmer of amusement in their eyes when they're watching us. 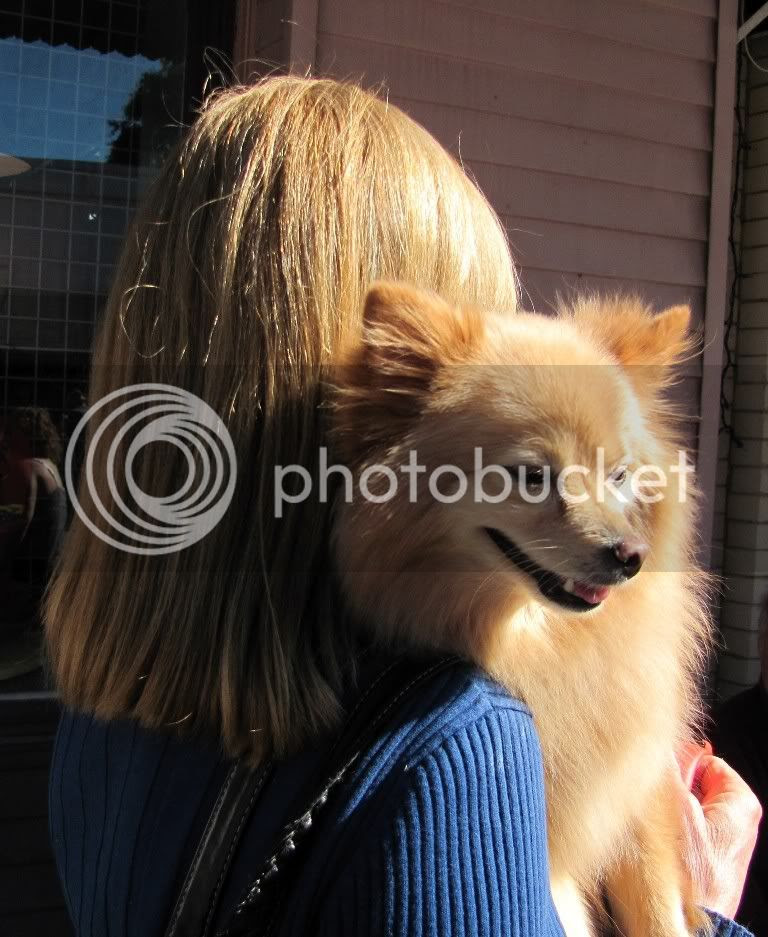 When I spotted this little princess with her owner I thought, Which came first, the hair color or the Pom? A reasonable assumption, as I often see small dogs being treated like fashion accessories by their female owners. Princess also had been ruthlessly groomed; she didn't have a hair out of place and was so clean she practically glowed.

I grew up with Penny, my grandmother's chihuahua, so I know with small dogs there's a lot more than meets the eye. They're smart, intuitive, and own their humans, not the other way around. These little ones are often so in tune with their owner's emotions they seem like pint-size psychics. For an elderly person, owning a small dog provides opportunities for exercise and welcome relief from loneliness and depression.

When I first saw Princess Pom she was behaving skittishly, evidently made nervous by the crowded conditions of the sidewalk. She tried to retreat into a doorway, at which point her vigilant owner scooped her up and carried her. From that moment on Princess grinned at everyone she and her owner passed, as if she'd gotten exactly what she wanted. 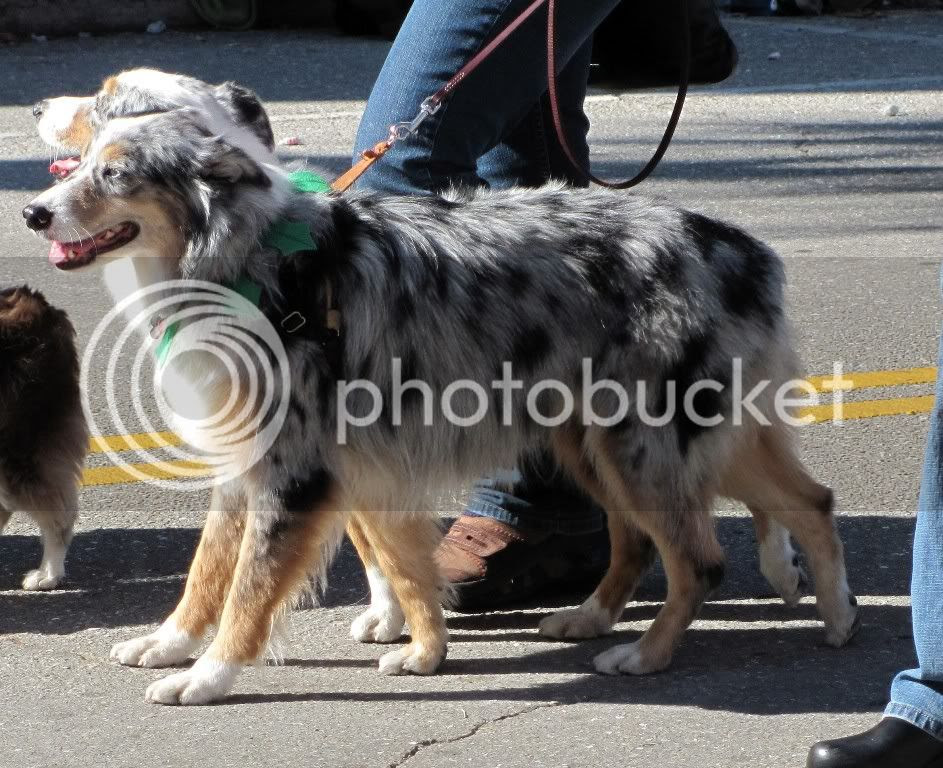 I don't know what breed this pretty pair of pups are (I love their fur; they look so exotic) but seeing them together reminded me of the joys of having two dogs in the house. I've never owned two dogs at once until this year, when we adopted Skye and brought her home to meet Cole. If one dog is a big responsibility, two are double that. Even something simple like walking the pups together can turn into a real challenge.

The owner had no problem with handling these two; they strolled in delighted sync, their eyes bright and heads high. The owner didn't seem to be paying much attention to the dogs, but then, they weren't misbehaving at all. As much as they belong to their owner, they were each other's companion, too. It was a beautiful day, they were together, and all was right with their world.

When I'm busy with housework or writing, I often see Skye and Cole forget about me while they play with their toys or curl up together for a nap. They also hate to be separated; when I took Skye to be spayed Cole was utterly miserable and wandered around the house looking for her for hours.

Not every story we write can include pets, but one good creative exercise is to imagine what sort of dog (or other type of pet) your character would own. You can go back in time to imagine a furry friend from their childhood, or what type they might consider adopting someday. If you're not familiar with the characteristics of different breeds, do the research, but also talk to other people about their dogs, why they chose that breed and what life is like with their pet.

What do you think a character's dog or other pet say about them? Let us know in comments.
Posted by the author at 12:00 AM