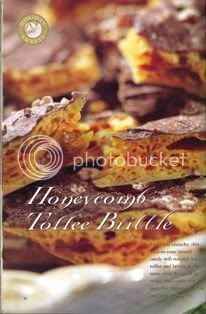 Yesterday I made candy for the first time: honeycomb toffee brittle. My mother makes candy (her fudge is to die for), and so do all the other women in my family; I've never tried. This is because I am occasionally clumsy in the kitchen, and in the past the thought of handling substances that are liquid and not far from the melting temperature of tin has always discouraged me. Besides, I can buy candy any time.

I wanted to make this one recipe, though, ever since I bought Simply Christmas by Carol Field Dahlstrom. Each November I'd take out the book, open it to page 80, and stare at the picture, which as you can see is scrumptious. The recipe only called for five simple ingredients. How hard could it be?

Not really that hard at all. The instructions are barely a paragraph long, and every time I read them, I imagined myself making it. Butter a cookie sheet, okay. Combine sugar and syrup in medium saucepan, no problem. Bring to a boil, can do, until the mixture reaches the temperature of molten lava . . . .and I'd stop right there, and carefully put the book away, and go make Toll House or sugar cookies or something else that didn't make me think of skin grafts and burn units. No candy in the world is worth that kind of grief.

That's how it went, until the next year I would take out the book, and stare at it again until my fear of being burned by the brittle monster made me put it away. I've done that for ten years, until yesterday, when the girls and I were baking, and I went to get a Cooking Light issue that had a lovely little chocolate-hazelnut cookie recipe. I saw the book, saw the picture that is now branded on my brain and heard something inside me whisper, "You wimp."

I handed over the chocolate hazelbut recipe to the girls, and got out a medium saucepan. The looming spectre of the brittle monster made me start bargaining with myself: I won't make it because I know I don't have all the ingredients on hand. But no, a check of the pantry revealed that I did have all the ingredients. I won't be able to find that candy thermometer mom sent me six years ago. But no, I found it in the I-never-use-this drawer. The thermometer is so old it'll be broken. It worked fine.

I was actually okay while the molten lava brittle mixture was simmering, mainly because I didn't have to stir it for twenty minutes. That allowed me to keep at a safe distance while the temperature on the candy thermometer crept up closer and closer to 300°F, the first time I would have to stir down the monster. I held my breath while I did, and escaped unscathed.

I cleared the counter for the final and most difficult part of the recipe, transferring the mixture to the buttered cookie sheet. Then all I had to do was wait for the latest reason to visit the emergency room mixture to reach 390°F. The brittle monster in the pot seethed and roiled, just waiting to get at some unprotected limb.

I love my kitchen; it's really the heart of our home, my favorite room in the house, and the one place I'm never scared. I didn't want to get burned, and while I watched the temperature on the candy thermometer pass 350°F, I was a bit shaky. Then I remembered all the things I've made here, that have been enjoyed by my family and friends, and all the things I still want to make. I am not an amazing cook, but I'm competent, and I knew I could do this if I just stopped being so scared of what might happen. This weird calm settled over me, and by the time the thermometer reached 390°F, I was ready to make candy.

I did make the girls stand back and protected my hands and my workspace before I touched the pot. Caution, never a bad thing in my opinion. I also had a wobbly moment when I stirred in the baking soda and the brittle monster in the pot foamed up to within a quarter-inch of the rim. But I kept a firm grip on my mixing spoon, and stirred it down, and quickly poured it onto the sheet. All of this I did without getting a drop on the counter, the floor, or me.

I'd slain the honeycomb toffee brittle monster. All by myself. 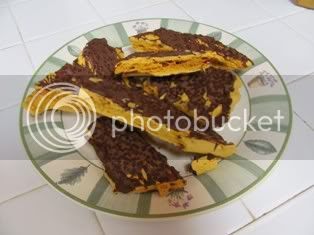 A half-hour later, when the candy was cool enough, I broke it into pieces and passed it around. My daughter didn't care much for it; her best friend thought it was amazing. As for me, well, it melted in my mouth, and was so rich and carmel-chocolatey that it made me shiver. It also stuck to my teeth, and had a trace of baking soda taste to it, and from the dense texture I think I stirred it too much that last time. I also know I've never enjoyed a piece of candy so much in my life.

There is this recipe, though, for a French dessert that I've never attempted. It's like a tower of orange-flavored cream puffs studded with citrus stars and veiled with sugar spun into gossamer strands. The kind of dish that makes people's eyes pop. And you know, I look at the recipe every New Year's Eve, and think, No, that's too hard, I could never do that . . . .
Posted by the author at 9:09 AM