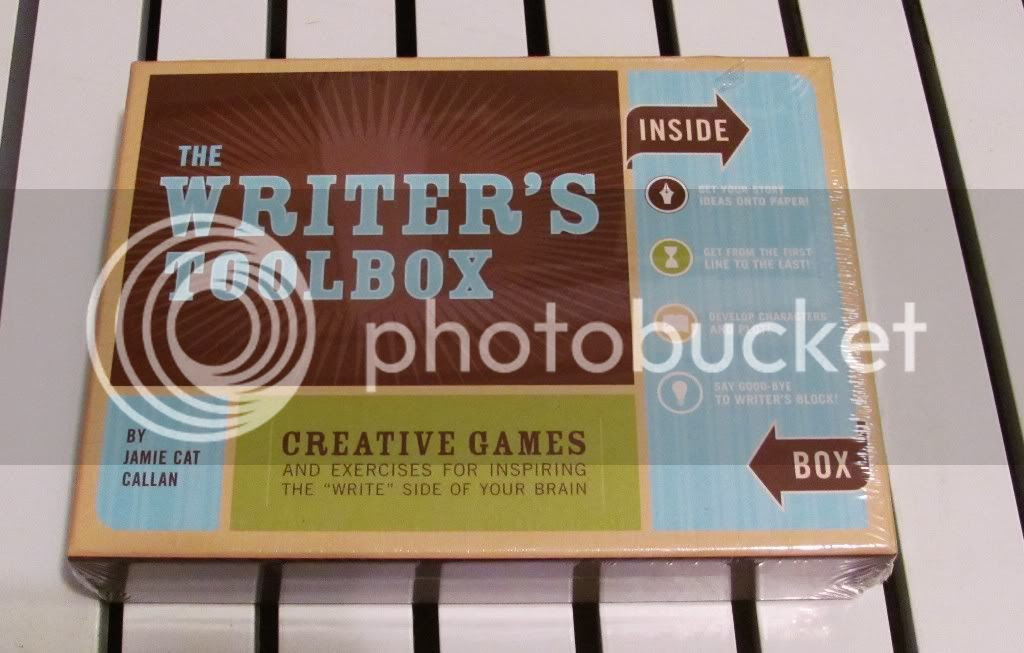 I often see inspirational and how-to writers' kits at the book store, and occasionally I'll pick up one to play with and see if it does anything for me. Most are good for sparking an idea here and there but rarely go the distance.

My latest acquisition is The Writer's Toolbox by Jamie Cat Callan, published by Chronicle Books. At $24.95 list price it's a bit expensive, but B&N.com has it new for $19.98 and used for less than ten bucks. One thing I did like was seeing a photo of the box's contents on the back, which I find reassuring (I don't like buying a kit that I can't open to see what's inside, and like most kits this one is shrink-wrapped to protect the contents.)

Roughly about the same size as a cigar box, The Writer's Toolbox was nicely packed with a variety of interesting stuff. There's a slim book that explains how to use all the components with various writing games and exercises, a deck of Sixth Sense Cards, four different story element wheels, three sets of Popsicle sticks with different phrases printed on them, and a mini hourglass (just like those old-fashioned three-minute egg timers our Moms used to use before digital everything.) 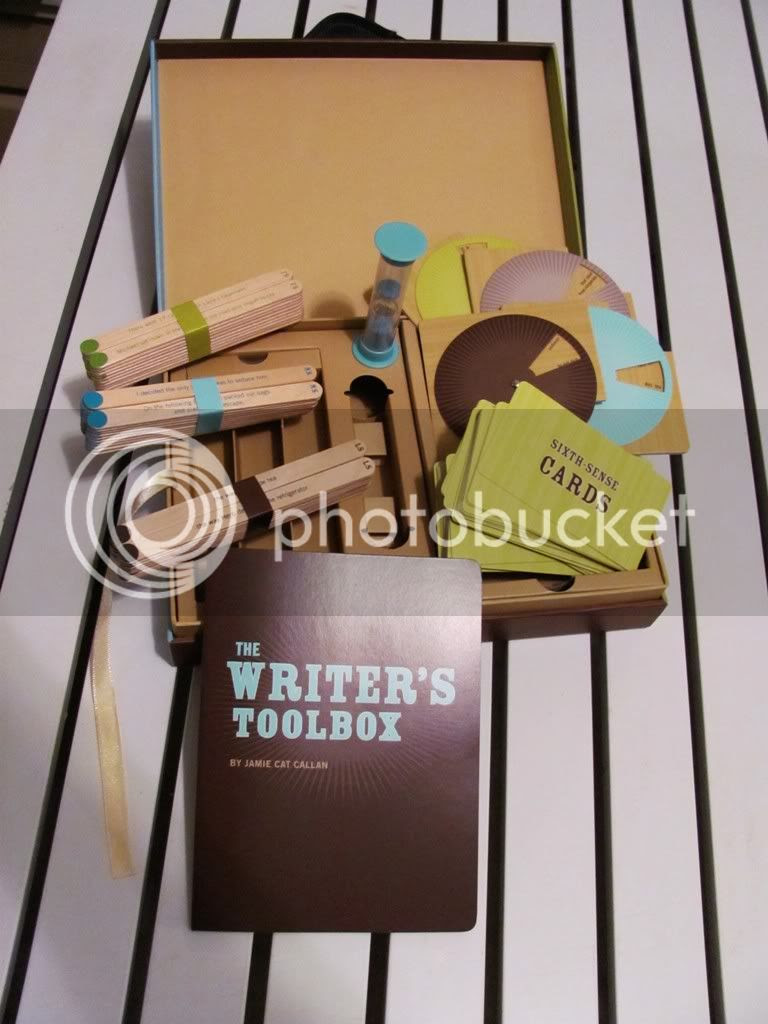 I skimmed through the book, which had a lot of narrative about writing, some very brief instructions on how to use the kit via various games and exercises, and example stories that had been written using the kit. Being more of a card person, I personally tried out the game for the Sixth-Sense cards (and a quick user tip -- don't discard the strip of paper bound around the cards because when you put them back loose and then try again to get them out of the box's niche they all don't want to come out.)

The game is to shuffle the cards, select three and place them face-down, then turn over the first card and write for three minutes. My first card read: your mother's pearls and here's what I wrote in three minutes (all of my examples are the first drafts, so don't expect perfection):

I kept a polite face on as my father introduced me to Darla, his personal assistant. She had seven feet of legs and one inch of forehead, the latter probably being slowly crushed by the lacquered weight of her Dolly Parton hair.

I listened to her breathy small talk for as long as it took me to study her pinched-waisted fuchsia jacket, the breast augmentations testing the elasticity of the white polyester shell beneath, and the matched pink perfection of her necklace. Then I excused me and my father, steered the old man into his office and shut the door on Darla's .

"Dad," I said, mostly through my teeth, "Why is your bimbo wearing my mother's pearls?"

The game continued with turning over the second card, which read orange spray paint, which reminded me of some real life experiences. Here's the bit of nonfic I wrote in three minutes:

The last time I saw orange spray paint was in L.A., along with blue spray paint, black, white, green, and every other color of the rainbow. In some neighborhoods you couldn't see a building that hadn't been tagged by some kid with a can and too much time on his hands at three a.m. on a school night.

Every so often we'd get a call to a scene of an apparent jumper, only to hear later from the police that the victim was a tagger who had slipped off whatever bridge, building or billboard he was adorning with his handle. Falling to your death, now, that's suffering for your art.

And finally, the third card to be turned over read: the sound of the dishwasher, and the final three-minute round. This time I tried writing a quick poem:

The dishwasher is much faster
he tells me again
what he means is it's safer
and won't cause me pain.
I've handwashed our dishes since '92
since the day we got married
it's one small thing I could do
not a burden I carried.

You load it like this
he says as he shows
how much room that it has
and where everything goes.
What he means is it's faster
it won't drop things or bleed
nothing for it to master
it just does what we need.

I stand back and watch him
as he turns the dial
and wait for the hum
with a plastered-on smile.
There's the sound of a wheeze
and then nothing comes from it.
He finds the motor has seized
because I've never used it.

The game was a lot of fun, especially using the timer and trying different forms for each card. As a writer I don't need a lot of explanation or examples; I'd rather get right to the games and exercises. But for a beginning writer, or someone who is dealing with major writer's block, this kit might just be a perfect fit.
Posted by the author at 12:00 AM