Because I can never do anything without thinking of how it applies to writing, I used my quilt guild's latest challenge (show a single block design in four different applications) to help me think through and work out a characterization for my next novel. 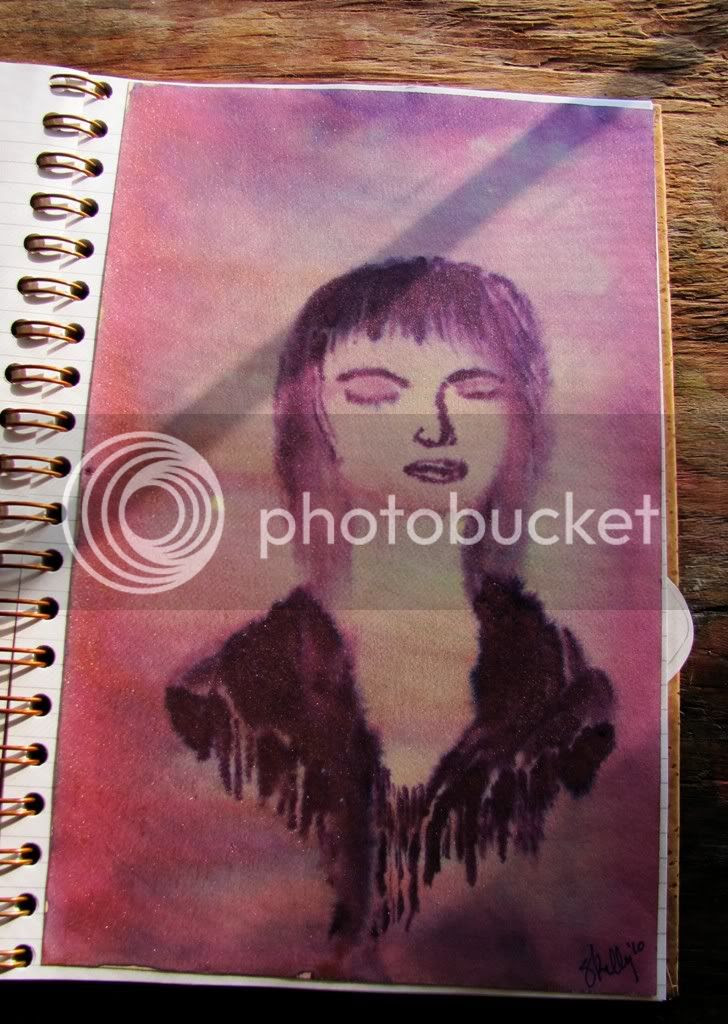 It all began with a watercolor I painted one morning while thinking about recovering from a tough situation in life. We've all been there, and I think once the disaster is over all we wish for is some measure of calm or quiet so we can sort ourselves out and heal. This I channeled into the portrait of my character, Charlotte (Charlie), who as an EMT is in the business of providing the first step in recovery for others.

At this stage Charlie was simply a two-dimensional, idealized and rather fuzzy image in my head. Like the watercolor, she was flat, but she had a lot of potential. So I took a photo of her portrait, resized it, and printed out four copies onto muslin to begin making her into some quilted objects -- and a person. 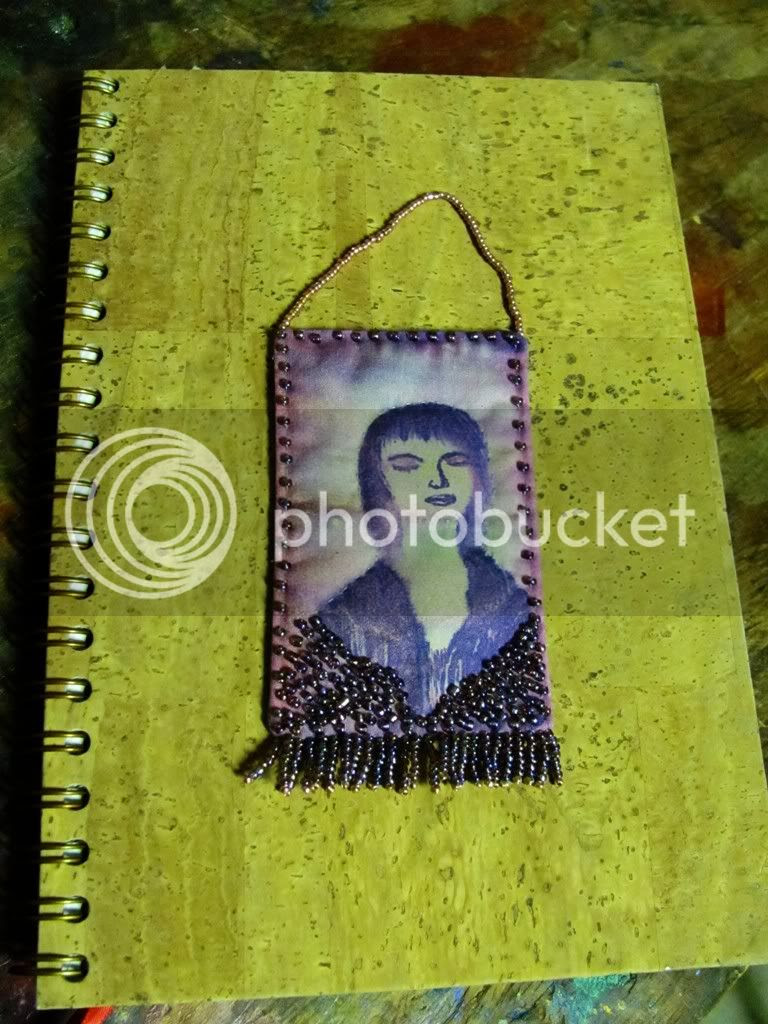 The first thing I made was a slightly oversized quilted ATC, to make Charlie's image iconic. Our protagonists are heroic figures, and I believe first responders are some of the most noble people on the planet. Despite this, they're often taken for granted or go unnoticed by the general public until that person is in need of rescue and critical care. Such is the case with Charlie, and before I started taking her apart and putting her back together, I wanted to pay some homage to her and her profession. 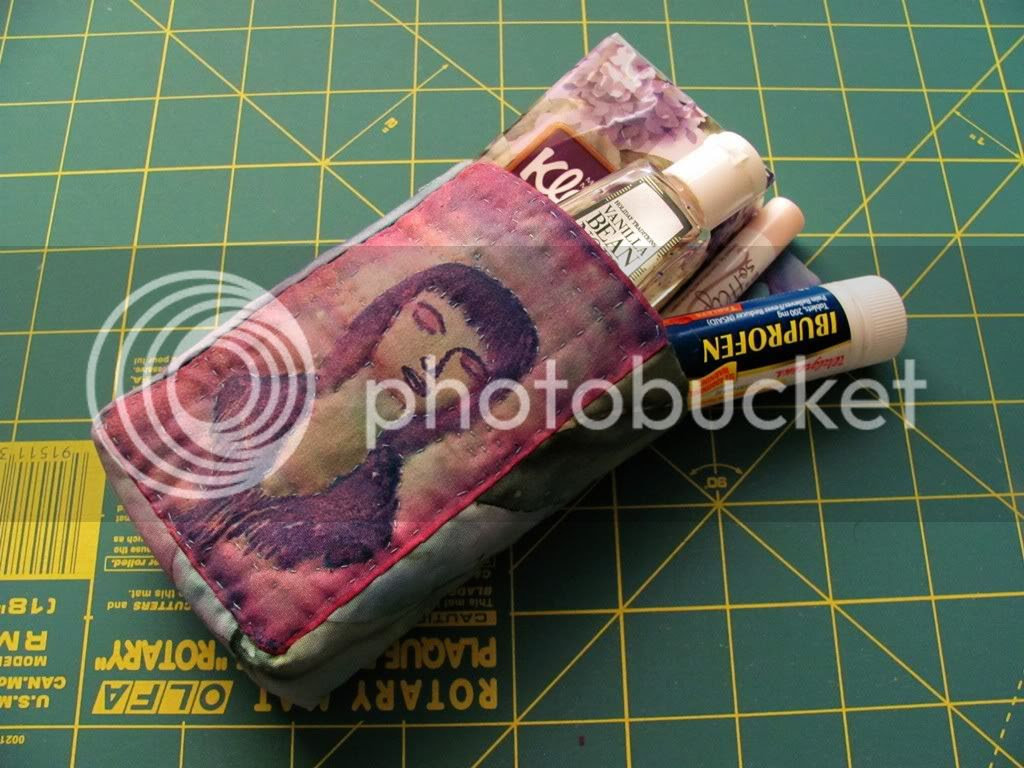 The next step was to casually see Charlie as others around her every day do. Her work defines her personality, which is practical, quick, focused, and not especially girly or frivolously feminine. Like this little emergency kit I put together (handy to keep in the car or the purse) By nature and profession Charlie is an excellent immediate problem-solver. If you had a personal dilemma, she would listen and offer useful options. She would not always be entirely sympathetic, though, as someone who can't decide which guy to date ranks fairly low on her list of Serious Life Problems. 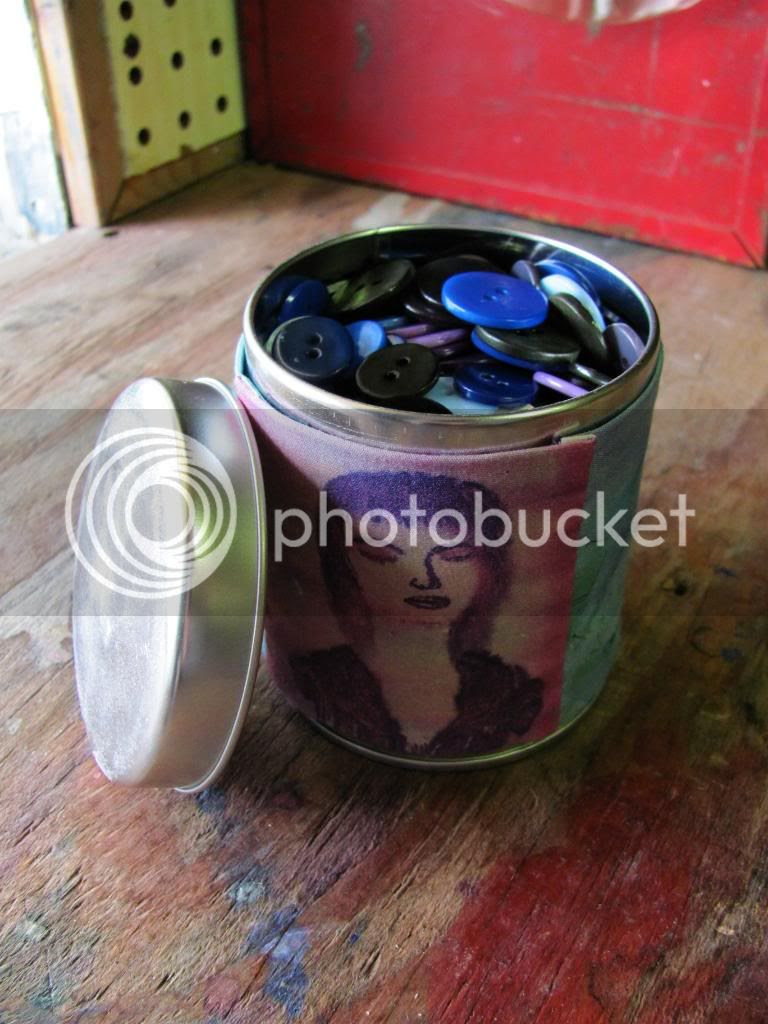 Charlie also has her own issues relating to a fairytale childhood that came to an abrupt and brutal end, and from which she was never rescued until she saved herself. Thus wealth, privilege and all the glittery bits of the entitled life are some of her hottest buttons, and bring out in her feelings of resentment, hatred and disgust. She also carries around some baggage from relationships at which she's failed and anger she's never resolved, which she generally channels into physical activity (which is why she's in great shape, she uses running and weight training as an outlet.) Her natural aggression makes her very good at her job -- a timid EMT wouldn't be employed for long -- but it also costs her when it comes to forming friendships and enjoying intimacy. Like this tin of buttons, Charlie usually keeps a tight lid on her emotions because she knows they're not always a plus, but because she hasn't yet dealt with her issues, they're still there, always waiting to spill out. 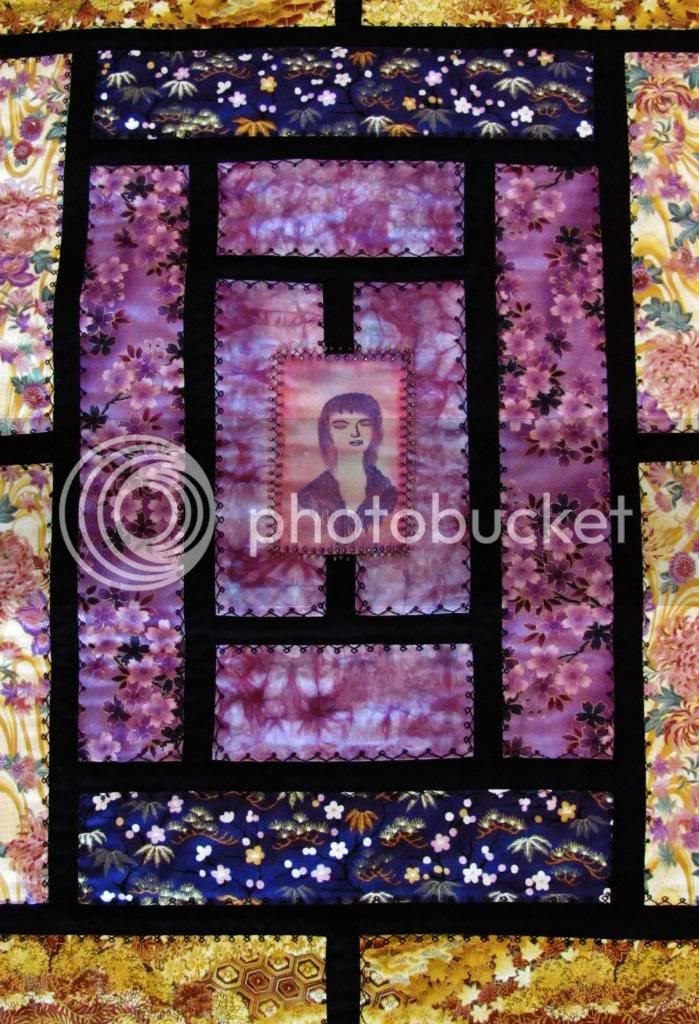 In the novel, Charlie is transported to a beautiful place where her life actually depends on how well she adapts to a pampered, privileged existence in Paradise. For most of us that sounds ideal, at least on the surface, but for Charlie it is absolutely the worse thing that can happen to her. Like this quilt, she's trapped in a beautiful place surrounded by danger and shadows. No matter how luxurious a cage, it's still a prison, but for Charlie it's also like a warp-speed trip back in time to the worst moments of her young life. If she is going to survive, she will have to face everything in her past that she's been avoiding for so long.

Charlie must also depend on a fellow inmate: a wealthy, privileged man who enjoyed the happiest of childhoods and yet works just as hard as she does to save lives. On one hand he represents just about everything she despises; on the other she learns that they share the exact same goals, values and beliefs. Now add in a strong physical attraction and you have a classic romantic triad. Her conflicted feelings for him will change and grow as the story progresses and the main conflict forces them to depend on each other in order to escape the Paradise in which they're trapped. This will also compel Charlie to finally confront the past, something that for her is long overdue.

Getting to know Charlie will take a few more weeks, but after going through the different stages of this project she is no longer two-dimensional or flat to me. Now my job is to bring that characterization to the page, and breathe life into it, because no matter what I make of Charlie for myself, it all comes down to what I can put into words for the reader.

If you'd like to try to do something similar, but aren't much of a sewer or quilter, try using a hobby or craft that you do enjoy to work out a characterization. This can be sketching or painting, beading, sculpting, collage art, putting together a CD of theme or passage songs (this one is very popular with most authors, btw) or anything else that helps you better visualize and figure out your character.
Posted by the author at 12:00 AM