My quilting guild recently offered a member challenge that really got me where I quilt: finishing and/or selling a project we don't want to part with, aka a CLG (Can't Let Go.)

Among my guild, a CLG is usually a large work-intensive project (like a hand-quilted king-size bed quilt), or an especially hideous one (think a hot pink and electric blue tumbling block baby quilt. With Hello Kitty and Bob the Builder embroidery.) Sometimes it's both. Often they come from wonderful ideas that burn so hot they quickly fizzle out (other guilds call such pieces UFOs, but while you can give up a UFO, you can't let go of a CLG.) 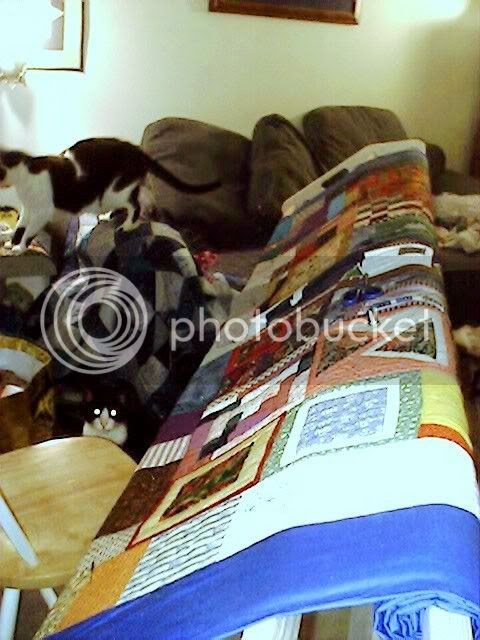 One of my CLGs is a king-size quilt I pieced together in 2001 from all the blocks I screwed up while teaching myself to quilt during the eighties (and for some reason, saved.) I thought it would be a great teaching piece when it was finished. I even named it "Don't Do This" and got as far as hand-quilting about a fourth of it.

I don't remember when I stopped working on it, only how I felt when I did: I couldn't stand looking at all those idiot blocks for another second. Why didn't I ever throw them away, or make them into a rag rug? But I'd already sandwiched it together and quilted a quarter of it, and while it's easy to throw out a screwed up block, it's a lot harder to do the same with a 106" X 106" quilt that's all but finished. Off to the supply closet it went. 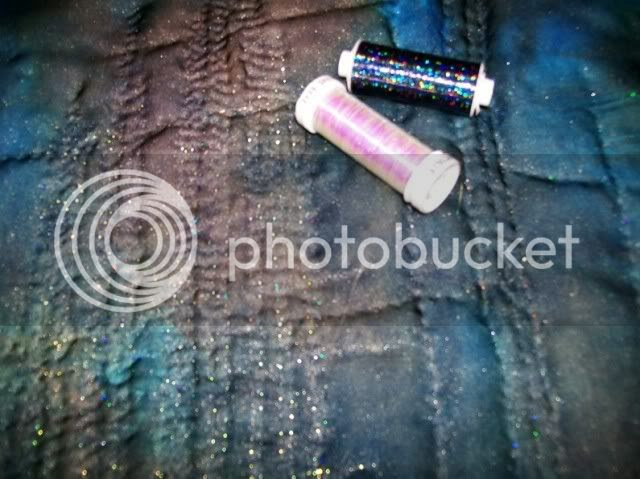 Another of my CLGs is a tiny project by comparison -- a fat-quarter-size wholecloth silk wall hanging with metallic thread. It was my rendering of the front facade of the Hyde Park Crystal Palace (which was destroyed by fire in 1936.) The silk I used was so delicate I had to do every stitch by hand and go very slowly. Only once I was about halfway through quilting the main structure lines, I noticed a tiny tear in the surface silk. I didn't know how it got there. There was no way to repair it (if you've ever tried to repair a rip in real silk organza, you'll know why) or trim down the piece to get rid of it; it was smack in the middle. I tried to keep working on it, but my eyes kept going to that tiny, unfixable flaw and it spoiled the entire piece for me.

Both projects are sitting on a shelf in my quilt supply closet. They've been there for about seven and two years, respectively. Every time I look at them, I feel guilty and angry. All that work, for nothing. Then I go sew on something else until I forget about them, until the next time I go into the supply closet for something, and see them, and hop right back on the guilt/anger/avoidance train.

I know why I can't let go of my CLGs. I tell myself I will finish them someday and be a better quilter for the effort. But I avoid them because they make me feel like I'm a fumbling moron pretending to be a quilter. I've made them into a paradox (or maybe they've made me into one.)

I think writers have just as many CLGs. Partial manuscripts, half-finished stories, the novel that petered out at Chapter five, the article that turned into a mindless rant. We save them and file them away while promising ourselves that we will come back to them someday and fix all the problems and make them worth the effort we put into them. As we swear that vow, a part of us stands aside and snickers because we know we'll never get back to them. Our anger and disappointment have already built a wall between us, over which we might peek now and then but never try to climb.

I talked with one of my quilter pals about my two CLGs, and how much I loved/hated the idea of trying to finish both (forget about selling them or even giving them away. I'd burn the damn things first.) She said the usual things, about how no one is born knowing how to piece and that there is no fabric on earth that is invulnerable (I brought up Kevlar, at which point she told me to stop being a smartass or the next guild challenge would be to make something out of pieced bullet-proof vests.)

Then she reminded me of something I did with an experimental novel I'd asked her to read: originally I wrote about two-thirds of it, shopped it around, and when no one would buy it, I cannibalized it -- cut it up, took the parts I liked most and incorporated them as a running subplot in another novel (which eventually sold like hot cakes.) So if I could do that with my writing, why not do the same with my quilted CLGs?

Looking at my CLGs as materials and components instead of whole pieces was exactly the push I needed. I might never want to go back and finish my "Don't Do This" king-size quilt, but I could certainly (happily!) cut it up and make it into a series of smaller "Mistake!" pillows. As for the silk wholecloth, I've been wanting to experiment with embellishing quilted silk with beads; why not use my ripped CLG as a test piece to see how the fabric reacts to different sizes and weights of beading? Not like I care if it's going to rip again.

So the next time you're in your Maybe Someday file, and feeling guilty about not finishing your CLGs in there, take a minute to think about how else you can use them other than what you originally intended. Is there a particularly great character you can introduce into another story? Was the setting a place you'd like to revisit under different circumstances? Even if your CLG is a total mess, would parts of it make good teaching examples in a blog post about what not to do?

It's not easy to take apart something you worked hard to put together in the first place. But if you can get some use out of your writing CLGs, isn't it worth a try versus just letting them sit there? Unlike quilted CLGs, you can also keep the original intact and just use copies, so if your experiment doesn't work you can put it back in the Maybe Someday file. But I think if you try this approach, in time you'll might find that file starting to shrink in size.
Posted by the author at 12:00 AM