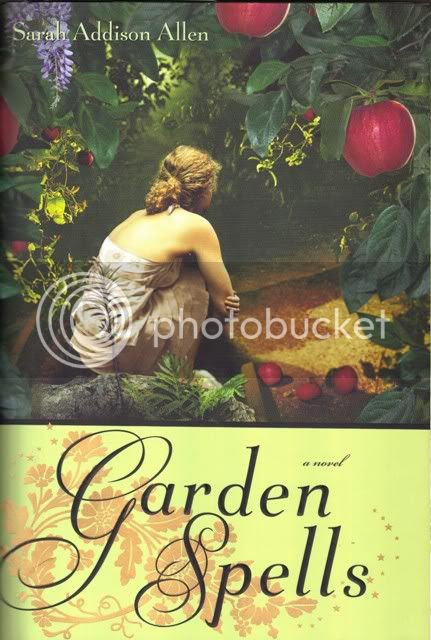 Laura W. made an interesting suggestion about revisiting books I've already read and discussing how they fare on the reread this year, so here's the first go.

I read Garden Spells by Sarah Addison Allen for the first time back in 2011, thanks to Charlene Teglia, when it instantly became one of my keepers and givers (a book I give to practically anyone). I've reread the novel a couple times per year since that first read, and decided to give it another go in anticipation of the publication of the sequel.

I remember during my first read of the novel how impressed I was by the effortless pace of the story, and the magical qualities of the characterizations. Then the story enchanted me and I forgot I was reading (which these days is almost impossible for any book to do to me) and I fell in love. Once I finished the novel I bought every single title Sarah had published plus five extra copies of Garden Spells to hand out to friends. I've since invested in at least a dozen more copies that I've given away, including both times I've been a Library Thing Secret Santa.

Obviously I'm very fond of this novel, and revisiting Garden Spells is like curling up with an soft quilt on a cold day. For me it's one of those old-friend books that reaffirms your faith in great storytelling. It's also a bit more than a comfort read, too. Each time I reread it my focus shifts to a certain element that I study and try to absorb, such as the unusual gifts the author bestows on the characters -- it's a stylistic choice, and very much related to how we view families in the south, but it's also an integral part of the story stucture, which makes it so interesting from a technical POV. Everything might seem to happen by chance or Fate or dumb luck in one of Sarah's books, but actually nothing does -- and you won't realize this until you have read the book five or six times.

I know why I'm personally drawn to this story; I've had several relationships that parallel those of the characters. There is nothing that gains your sympathy as a reader faster than seeing bits of your own life experience in fiction. I also know what it's like to have an ability that others resent or envy or fear, or simply don't understand, and how immensely that can screw up relationships and virtually everything else in your life.

Knowing how the story will end doesn't diminish making the journey again with the characters in Garden Spells, and that's highly unusual. This may be because it's a novel in which the journey is every bit as important as the destination. Also there's nothing like it out there; this is a naturally gifted author with a style that can't be compared to any other writer -- and that is beyond rare.

After four years and many rereads I'm glad I can still recommend Garden Spells by Sarah Addison Allen as a timeless, classic story that you'll not only enjoy but be happy to revisit many times.