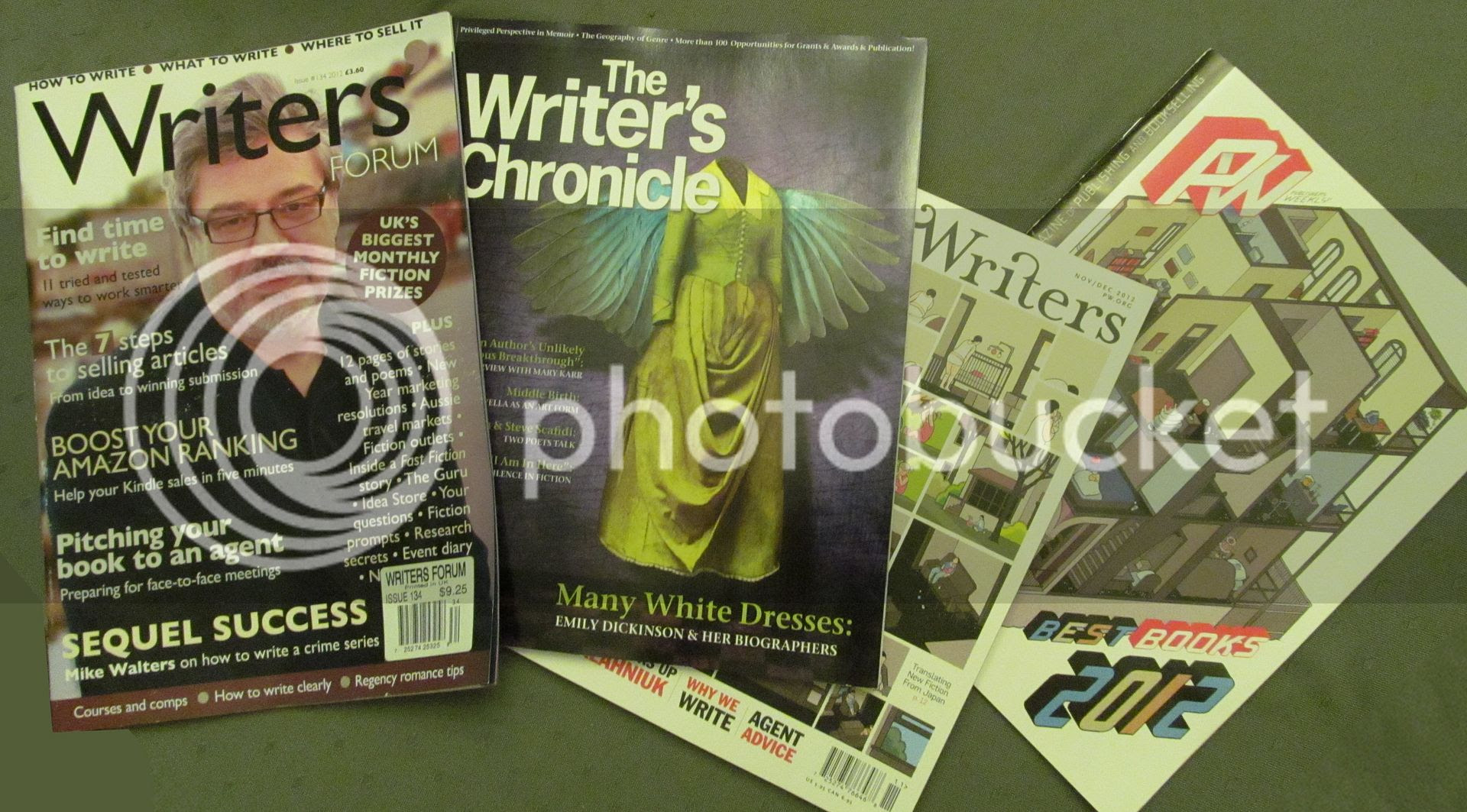 I'm off on a road trip this week, and since most of the time I will be unplugged from the internet I'm going to disable comments until I get back (I will enable them on my return, I promise.) I apologize in advance for any inconvenience this causes.

It's been quite a few months since I purchased any writer mags, so while I was out shopping for books I invested in a few to read on my trip. Here are some thoughts on the four I picked up:

I've never subscribed to a magazine published outside the U.S., but reading the marvelous December issue of the UK trade The Writers' Forum convinced me it's time. In this issue I read not one but five articles that were directly helpful to me as a working writer, discovered a couple dozen new markets and contests, and enjoyed a sense of being spoken to instead of being peddled something (the kind of class that disappeared from U.S. mags ten years ago.) Since I'm a Yank it will be a bit more expensive, but I think it's worth it. I'm also worried my BAM will stop carrying it and I'll be cut off from one of the better sources of writer info that I found last year.

According to the 11/5 issue of Publishers Weekly, 22% of all book spending in the second quarter of 2012 went to purchasing e-books. Since their source for the stat is Bowker Market Research you can probably bank on it. Jim Milliot has a piece on the Random Penguin merger and how it will work that is mostly PR but has a couple of promising promises. Otherwise this issue's theme of the best books of 2012 is literary-spawned, genre-snubbing, and really not worth the $5.99 newstand price.

Alix Ohlin has an interesting article on silence in fiction in the December issue of The Writer's Chronicle, and explores how to make the most of the parts of your story when none of the characters are talking. I haven't been through more than that so I'll read the rest of the issue on the road.

Benjamin Percy's article Don't Look Back in the Nov/Dec issue of Poets & Writers takes on the issue of backstory with a vengeance, and I'll quote here: When my students as me how much backstory they're permitted to include in a story, I say, "How about none?" None is a good start. (He actually doesn't suggest we abandon our backstories, but he does make some very good points on how to use it effectively versus piling it around in heaps or glutting the story with it.) As with the Chronicle I haven't read any more than that, but I'll review the market and contest listings while I'm away and see if there's anything fee-free that I can glean for a future sub ops post.
Posted by the author at 12:00 AM