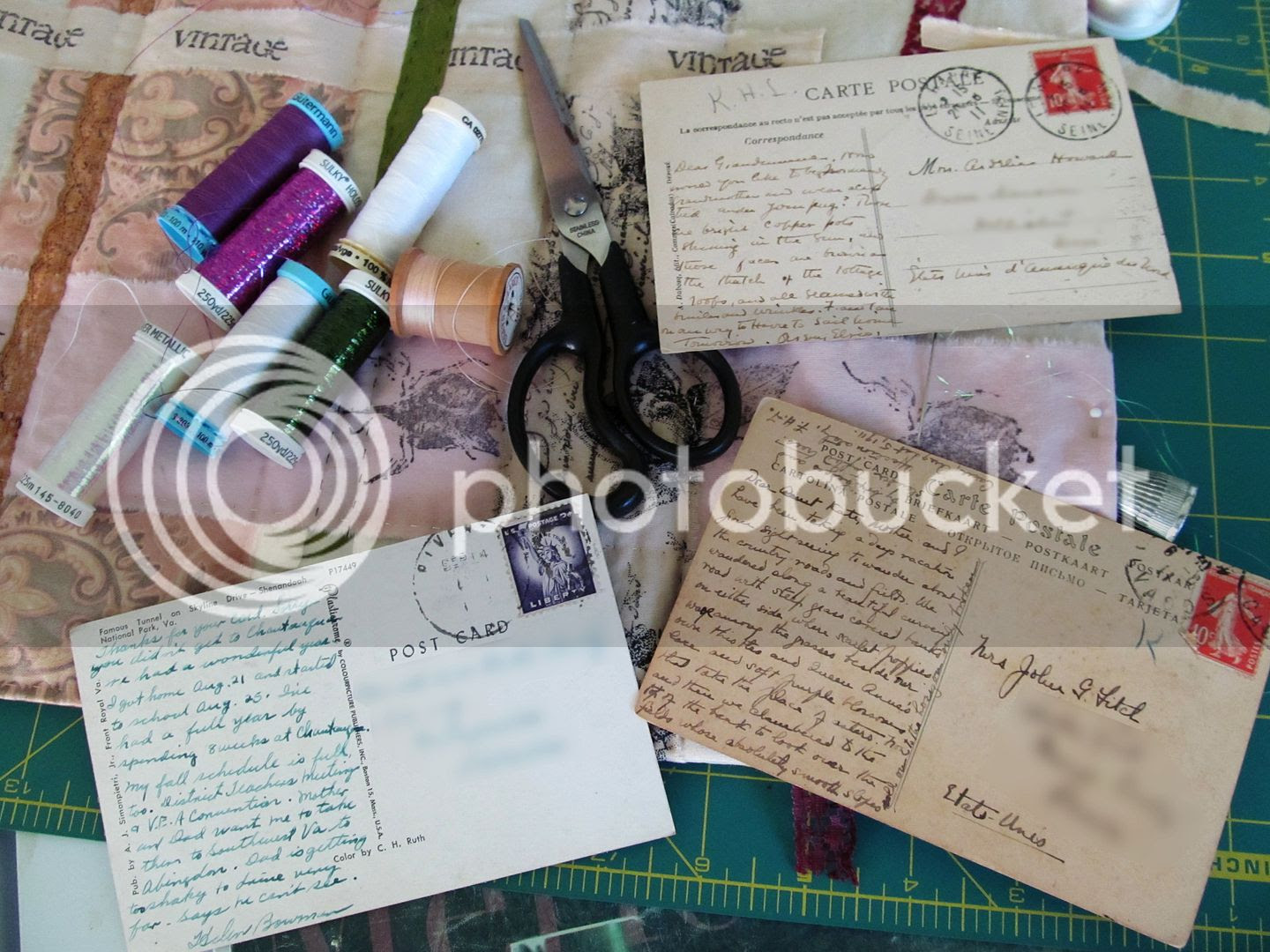 I love finding old postcards at flea markets and junk shops. Usually they're stacked upright in a shoe box for easy browsing, and I always hunt through them for what interests me: images of natural wonders, historic monuments, works of art and architecture from around the world and that sort of thing.

Most of the antique postcards I find are blank (originally purchased as souvenirs, I guess) so any I come across with stamps and writing are extra special. This past weekend I scored three (two that were definitely over a hundred years old) that had intriguing little notes on them. 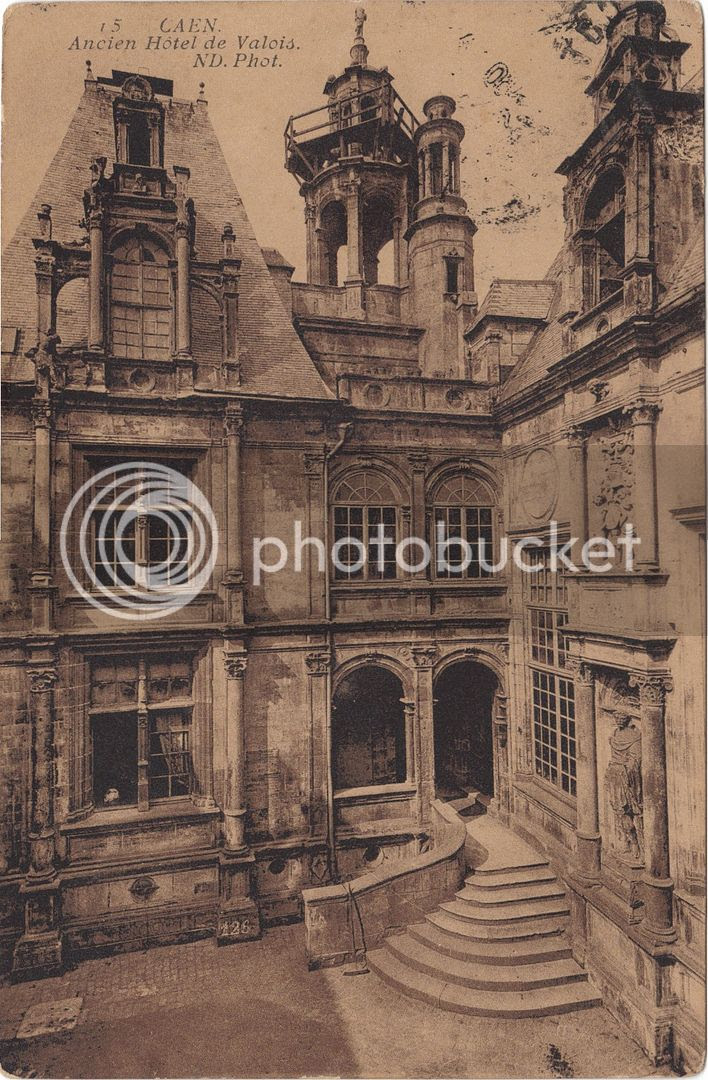 The first showed a photo of the Ancien Hotel de Valois in Caen, was mailed from France to the U.S., was written by a Ms. or Mr. Litch, and detailed a lovely walk in the country:

Dear Aunt Kate, Mother and I have been taking a day's vacation from sightseeing to wander about the country roads and fields. We wandered along a beautiful curving road with steep grass-covered banks and either side where scarlet poppies wove among the grasses beside our own thistles and Queen Anne's lace and soft purple blossoms that take the place of asters. Now and then we clambered to the top of the bank to look over the fields, whose absolutely smooth slopes roll over to the horion, only broken by box hedges and slender tufted trees. Affectionately, F.H.L, Caen, August 5th, 1911 (I'm assuming since Aunt Kate's last name was Litch that the writer shared it. I'm betting F.H.L. was a woman, too.) 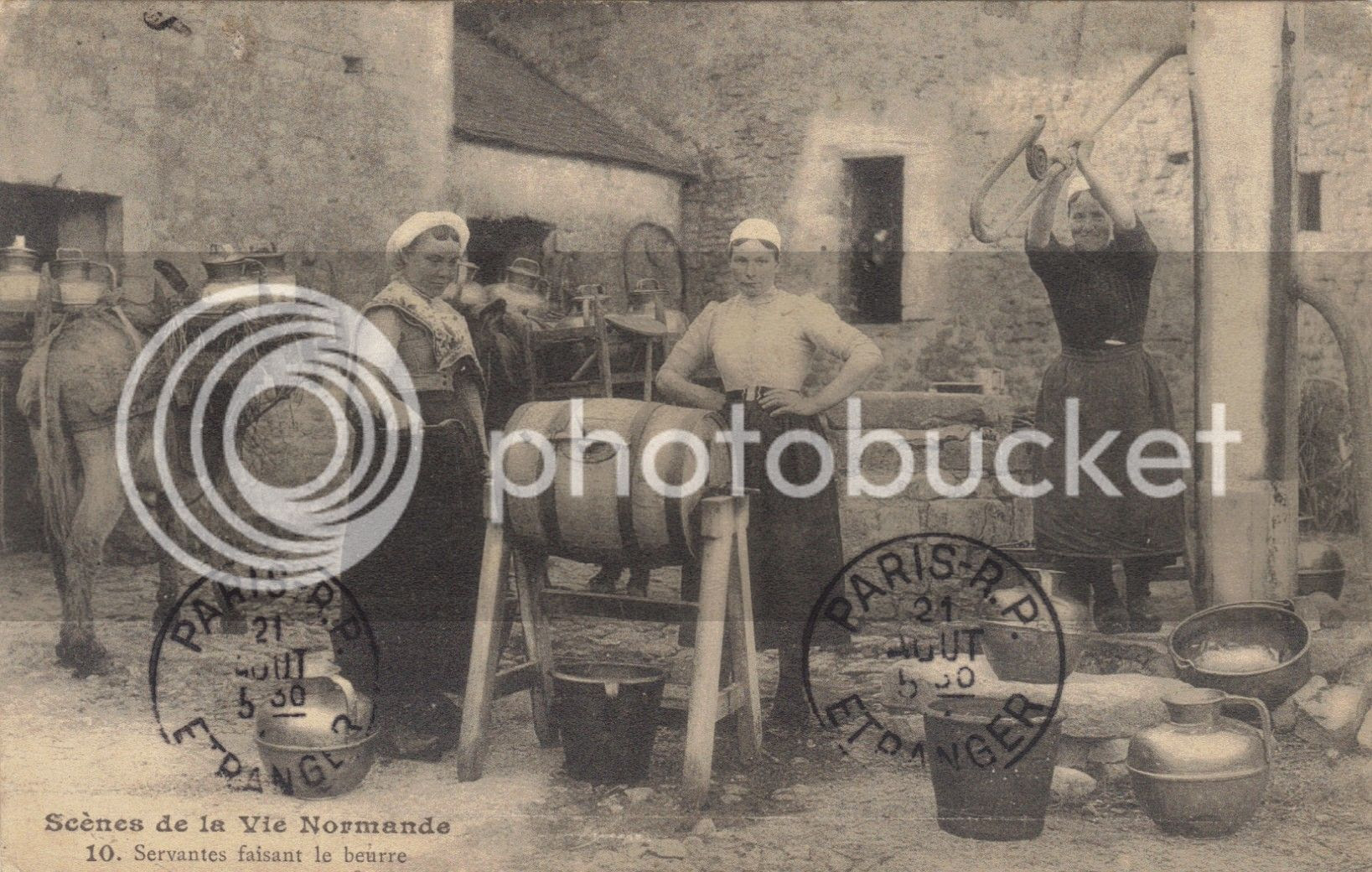 Another French traveler wrote from Paris to her grandmother in Massachusetts, and if I'm interpreting her handwriting correctly, teased the old lady about wearing a cap like the female French peasants. She also described in color the black-and-white image on her postcard:

Dear Grandmama, How now you like to be (?) grandmother and wear a cap tied under your pug? Those are bright copper pots shining in the sun, and those faces are brown as the thatch of the cottage roofs, and all seasoned with smiles and wrinkles. (?) on our way to have to sail home tomorrow. As ever, Elvira, August 21, 1911 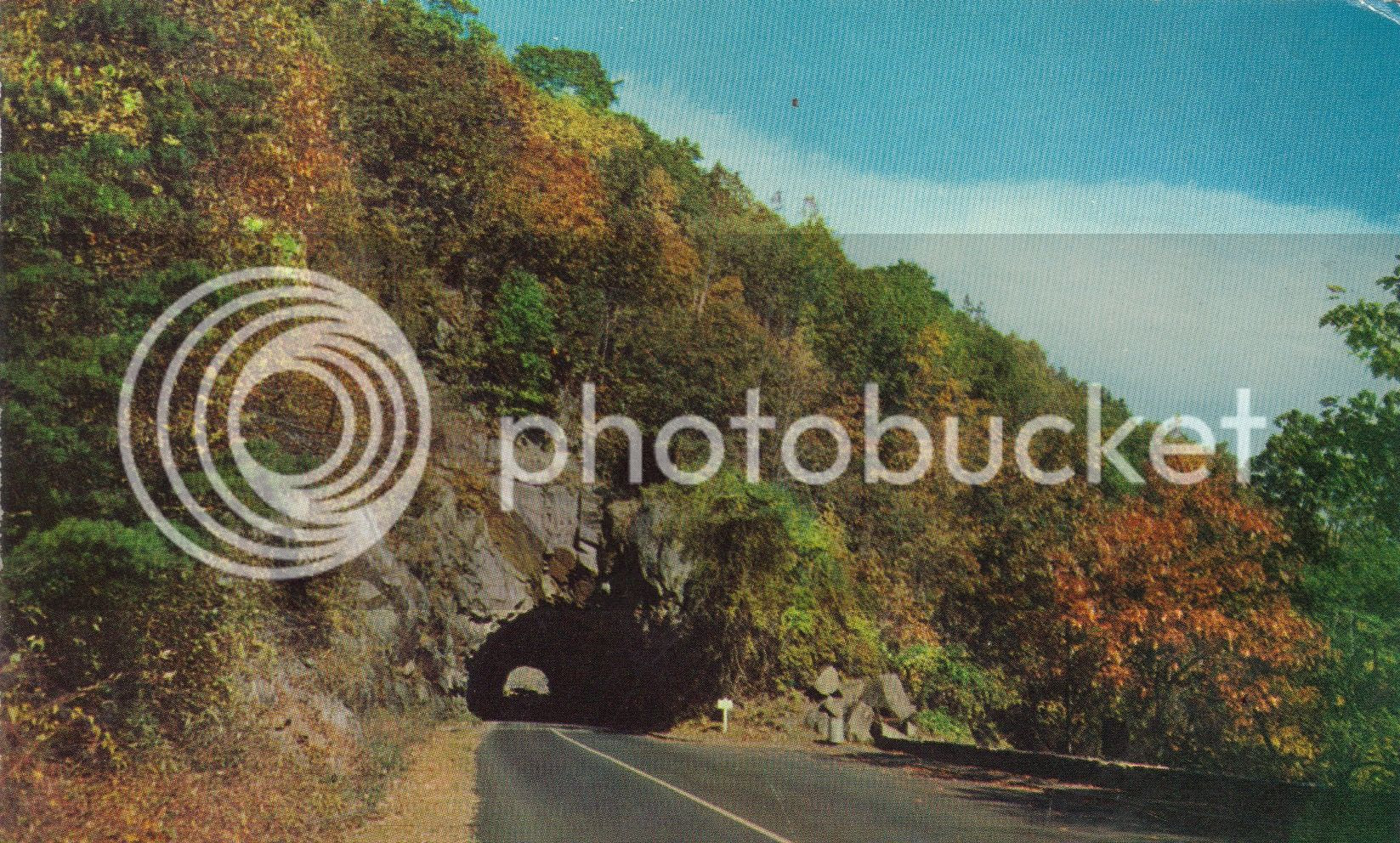 This postcard sent from Shenandoah National Park in Virginia to a minister in Florida has a blurred postmark that shows only the month and date, but it was mailed with a 2-cent stamp, which means it could have been written any time from November 2, 1917, to June 30, 1919, when the rate for postcards and postal cards was 2 cents. The writer talked mostly about school, but she mentioned a worrisome family concern toward the end of her note:

Thanks for your card. Sorry you didn't get to Chautauqua. We had a wonderful year. I got home Aug. 21 and started school Aug. 25. I've had a full year by spending 8 weeks at Chautauqua. My fall schedule is full, too. District Teachers meetings a V.E.A. Convention. Mother and Dad want me to take them to Southwest Va to Abingdon. Dad is getting too shaky to drive very far -- says he can't see. Helen, September 14

Aside from being wonderful fragments of personal history, old written postcards can be great story starters. While Aunt Kate's sister and niece were wandering in the French countryside, what else did they see besides flowers? Did they make their boat back to the states? Which ship did they sail on from France to the U.S.? Who might they have met on board?

As for the teasing Elvira, she sounds like quite a character -- funny and appreciative of beauty. Who else did she meet in Normandy? Is it possible that she encountered F.H.L. and her mom during her travels (they might have missed their ship on August 6th, after all, and if they had I bet Elvira would offer to share her cabin with them. She seems like that kind of generous gal.)

Helen's card has some mystery to it as well; Chautauqua (which I think might be this place), the V.E.A. convention, and why did she visit Shenandoah in September, when she was already in school (or working as a teacher, as VEA in Virginia is a teacher's organization.) She just got home Aug. 21; did she live near the park? She was obviously devoted to her parents; worried about Dad being shaky and having vision problems. What happened when Helen took the parents to Abingdon (a very historic place, btw)?

Do some online research to answer your own questions (I found all the links for this post in about two minutes) or correlate something you know happened about the location with the details you cull from your postcards. You can look at the history that happened in your postcard writer's era as well to get a feel for what their world was like, too.

1911 was an interesting year; back in the States William Howard Taft was serving as President (probably our fattest), Franklin D. Roosevelt was elected to the Senate, Italy declared war on Turkey, the French and German squabbled over Morocco, Marie Curie won the Nobel prize, and the Philadelphia Athletics beat the New York Giants four games to two to win the World Series. Everyone was reading The Broad Highway by Jeffrey Farnol and listening to the last of the red-hot mamas, Sophie Tucker, sing Some of These Days; Orville Wright set a record in October for sustaining flight in a glider for nearly ten minutes -- a record that wouldn't be broken for another ten years. There were ominous days ahead, too: in three years Archduke Ferdinand would be assassinated and touch off WWI, and four years after that a global influenza epidemic would kill an estimated forty million people.

For stories I'd write about two of my postcards I'd probably run with the theft of the Mona Lisa from the Louvre in August 1911 -- that was discovered one day after Elvira mailed her postcard to her grandmama from Paris -- and I bet she'd get sucked into the hoopla over the crime. Maybe she'd get mixed up with a dark and dangerous art thief accused of stealing the infamous Mona, who first uses her to establish an alibi . . . and then falls in love with her. In September 1911 the French battleship Liberté exploding in Toulon harbor, killing hundreds -- perhaps something the Litch ladies saw if they'd decided to prolong their holiday and travel south. Moved by the suffering of so many, F.H.L. might defy her mama and slip out of their hotel at night to work as a volunteer nurse at a makeshift hospital in the harbor. That's where she and her new friend (a handsome French surgeon, naturally) would discover the real cause of the terrible accident, which would force them to risk their lives to prevent another, more horrible tragedy. Something to do with Morocco . . .

In addition to serving as great stock for your story idea file old postcards make great writer-pal gifts, too (fill up a recipe card box with them.) Sometimes antique dealers want a couple of bucks for the older specimens, but at the flea market I paid only twenty-cents each for mine. You can also find lots of them pretty cheap from some ephemera dealers on Etsy.com -- just be sure and look for cards that were used.
Posted by the author at 12:00 AM