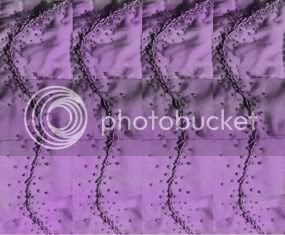 While I was reading the April/May 2012 issue of Quilting Arts magazine I was tempted by their reader challenge to create a "signature color" piece. Making an interesting monochromatic quilt takes some imagination, especially if your signature color is dark like mine (violet), but it wouldn't be a challenge if it were easy.

I like building color palettes for my characters, and color also plays a major role in my storytelling, so I wondered if any of my characters have a signature color. Jayr from Evermore came immediately to mind; I used bronze and violet and tangerine in her color palette, and when it came time to suggest a color theme for her novel's cover art I went with violet because it was my favorite of the three. Violet is definitely Jayr's color. Green played an integral part in building Gabriel's character in Night Lost, as did scarlet when I put together Lucan's world in Dark Need. I never consciously picked out one color for signature purposes but I often gravitated toward one in the process of telling the story. Certain shades of the same color can be used for very different characters who share the same connection, which is probably why royal blue will always remind me of Valentin Jaus while ice blue makes me think of Thierry Durand.

You don't have to pick out a signature color for your characters, of course, but if the idea intrigues you then you can almost let the character make the choice for you. A happy-go-lucky soul is probably not going to have black as their signature color, just as a dark and brooding type would likely not surround themselves in sunshine yellow (maybe if they were being tortured.) Colors have associations for all of us, so let the character's personality and preferences guide you. Also keep in mind that colors can be like armor, and the colors we show the world are not necessarily the colors we use in private. A goth who always wears black and projects a tough image might have a home bedecked in pink velvet and poufy white lace, as I discovered when I was writing Nightbred and got to know Christian Lang.

Color doesn't have to be the character's signature, either. I've used signature scents for all my Darkyn characters, for example, and signature tattoos for all my Kyndred people. Signature = symbol, so the possibilities are really endless.
Posted by the author at 12:00 AM