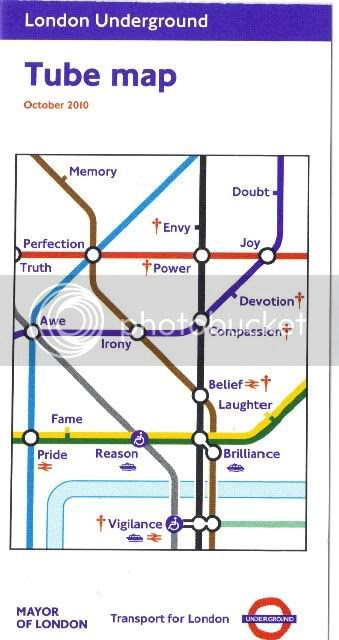 I love the cover of this map for the London Underground (click to see larger version), which was obviously designed by someone with a wry sense of humor. Wouldn't the journey be so much simpler if we could pick up a map that shows us in advance all of life's endless interchanges?

In the real world we can only wish, but in story worlds we plotters map out in advance what happens to our characters. We usually do this by writing outlines, synopses, chapter summaries, storyboards, index cards, filling in templates and what have you (I've gone so far as to outline a story like a wiring diagram.) I've never thought of mapping out a story like an actual map, probably because cartography is a beautiful, complex art that is completely beyond me. If you think of story like a simple line map for an underground or subway system, however, it seems far less intimidating.

The transit lines would be characters, I think, and the interchanges (stops along the way) would have to mark different points or elements in the story. To make it a useful tool, I'd want to map it out chronologically, starting the lines at chapter one and ending at the final chapter. One could draw/superimpose them on an actual real world map (assuming that would somehow be helpful), but to keep things from getting too complicated I'm going to start with a plain white background.

Here's my first try using three characters and the settings where they intersect in Nightborn: 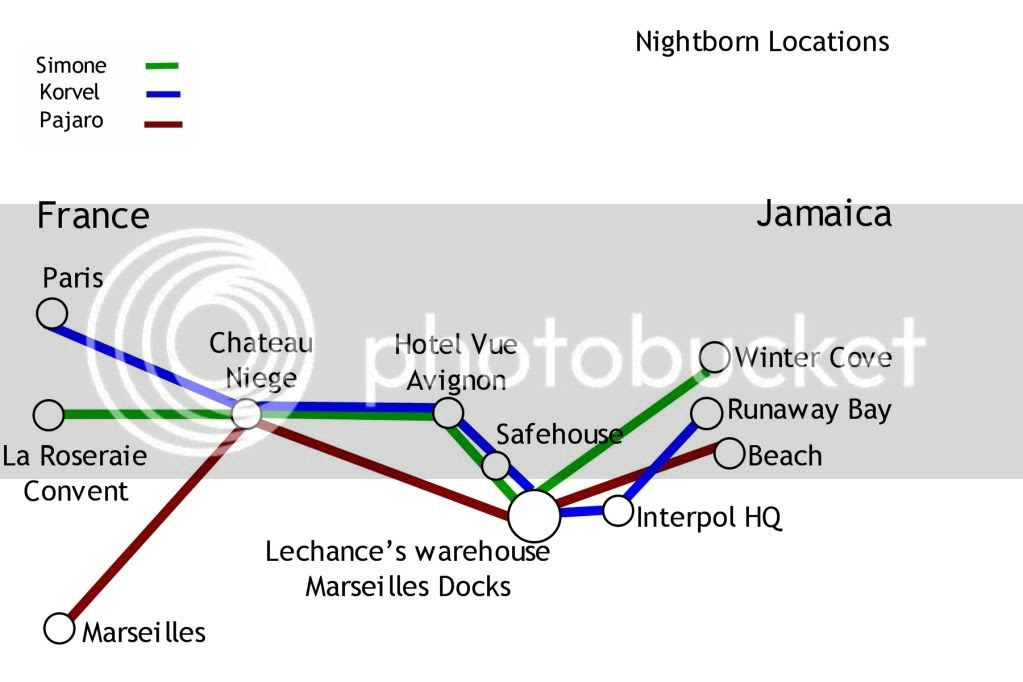 This could be a lot of fun to do with story elements other than locations or settings, too. A map with transit lines of all the novel characters and what makes them intersect or split away from each other would be fun to put together. Or imagine exploring the progression of a relationship between two characters this way while using the interchanges as events, emotional shifts, the effects of other characters on the relationship, etc.

I don't think you have to use a photo shop program for this; you can draw it in colored markers/pencils on paper, or use a whiteboard with those dry-erase markers (which would probably be easier to revise.) If you're really creative you could probably do something similar with ribbons, push pins and a big cork board, too.

I'm going to keep tinkering with this and see what I can put together. In the meantime, what do you guys think? Would this be something that would work as an outlining tool for you, or is it too weird to be practical?
Posted by the author at 12:00 AM