The winner of the Discoveries Week: Jessa Slade giveaway is:

Allison, who wrote: I'm seconding Charlie Huston. I'm still blown away by the fifth book of his Joe Pitt novels, and I know it's 90% because of all the dominoes he set up in the first four books. I'm probably sixthing Jim Butcher, and I have to say, Terry Pratchett is still my favorite storyteller in long and short form. Until him, I didn't realize you could have so much fun with short stories.

Allison, when you have a chance please send your full name and ship-to address to LynnViehl@aol.com so I can get your package out to you. Thanks to everyone for exposing all the other storytellers out there with mad skills.

I've already mentioned how stressful things were while I was in production on Nightborn, what with the change of editor and the loss of my father and other unhappy events. I owe a tremendous debt to the family members, friend and colleagues who were kind, understanding, sensitive and did everything they could to help me during a very tough year. You guys were great, too; I got so many wonderful e-mails from you filled with the kind words and prayers I needed to keep me going.

No matter how miserable you are, books are always waiting to take you away, and give you something else to think about besides your problems. One set of novels I took with me everywhere last year was Marjorie M. Liu's Hunter Kiss series. Just before A Wild Light came out in August I decided to reread the entire series, and that's why Maxine and Grant and the boys were with me during the worst of times. They became like my own personal garrison of hope, and when things got bleak, they brought me comfort and kept despair from overwhelming me.

For these reasons I planned to give away a complete set of Hunter Kiss novels when Nightborn was released. I had hoped to make a quilt for the giveaway, too, but unfortunately my work schedule prevented me from committing to any big creative projects. So during my travels I kept an eye out until I found a 54" square lap quilt that reminded me of Marjorie and her characters, and how there is always beauty to be found out there, even in the dark. 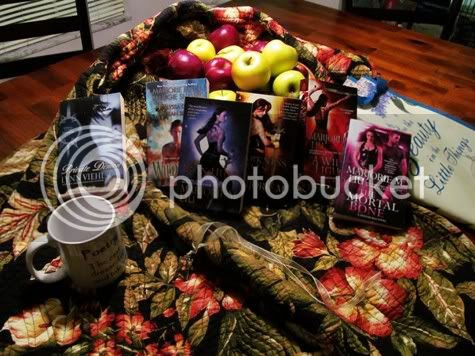 If you'd like to win the lot, in comments to this post name an author or book you've read who has helped you get through the worst of times (or if you can't think of any, just toss your name in the hat) by midnight EST on Tuesday, March 13, 2012. I'll draw one name at random from everyone who participates and send the winner unsigned copies of Marjorie M. Liu's Hunter Kiss series: The Iron Hunt, Darkness Calls, A Wild Light, The Mortal Bone as well as the Wild Things anthology in which the very first Hunter Kiss short story appeared, a signed copy of my novel Private Demon, the beauty in the dark quilt, a Poetry mug from Author Outfitters, a BookLoop with a miniature of Da Vinci's "Mona Lisa" along with some other goodies, all neatly stowed in a "See the Beauty in the Little Things" reusable shopping bag (once again, please note that the bowl of apples on the table are not included; they're for my kids.) This giveaway is open to everyone on the planet, even if you've won something at PBW in the past.
Posted by the author at 12:00 AM