The winner of the Discoveries Week: Shiloh Walker giveaway is:

Shrouded Heart, when you have a chance please send your full name and ship-to address to LynnViehl@aol.com so I can get your prize package out to you. Thanks to everyone for joining in and making so many great March recs.

As much as I enjoy my Darkyn immortals, I think human characters can be just as much fun to write. Simone Derien, the female protagonist of Nightborn, is an extraordinary woman who wanted nothing more than an ordinary life of serenity and service at a French convent. To have it, she had to make a terrible bargain, but in the ten years since she's mostly forgotten about the price of her freedom. When a courier arrives at the convent with a message from one of the deadliest of Kyn assassins, Simone's promise comes due, and her quiet, peaceful life is suddenly gone forever.

While writing my Kyndred novels, I fell in love with other extraordinary humans much like Simone. No matter how powerful their gifts or heavy their burdens, the Kyndred always coveted most what the rest of us take for granted: our simple, ordinary lives. While we often admire and envy those who are exceptionally gifted, we rarely appreciate that deep down they're just like us, and want to be accepted and valued and loved for who they are, not what they do.

As one half of the Sydney Croft writing team, and author of her own Shadow Force and multiple SEAL novel series, Stephanie Tyler is already a very accomplished storyteller with wonderful range. This month she's debuting her first novel of the Eternal Wolf Clan, Dire Needs, a new paranormal romance series about the Dire Wolves, immortal shape-shifters battling an ancient enemy in the modern world. This story moves like lightning from the first paragraph, and has such vivid, wild characters that you're fully immersed in their dark and dangerous world within just a few pages. I think this is the most exciting debut series book being released this month, and definitely worth checking out. 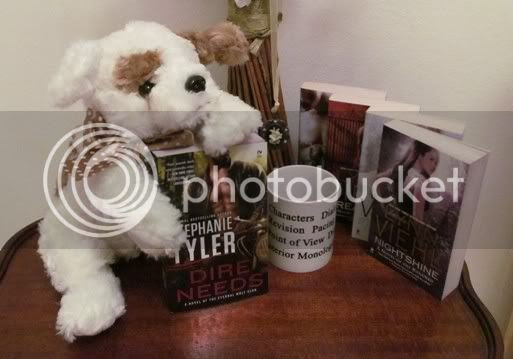 Or you might win a copy from me, along with all four novels in my Kyndred series, an adorable stuffed pup named Scout, a writer's words mug from Author Outfitters, a black cameo edition of my BookLoop and some other goodies. If you'd like to win this bunch, in comments to this post name your favorite shifter book or series (or if you can't think of one, toss your name in the hat) by midnight EST tonight, Thursday, March 8, 2012. I will draw one name at random from everyone who participates and send the winner an unsigned copy of Stephanie Tyler's Dire Needs, signed copies of my Kyndred novels and the rest of the goodies. This giveaway is open to everyone on the planet, even if you've won something here at PBW in the past.
Posted by the author at 12:16 AM