Losing an editor is never fun, but you get over it; even if it's an editor you've worked with for half your career. It is a bit tougher if that editor also happens to be the only one you've ever worked with on the bestselling novel series of your career, but after you hyperventilate your way through the anxiety attacks, and stop waking up in cold sweats at 3 a.m., you can adjust. Mostly. The truth is that's the worst case scenario.

Unless, of course, that editor you've worked with for half your career on the bestselling series you've ever written quits a month before you restart that series. Then you're probably going to need therapy. Or just give me a yell, because that's what happened to me right before I turned in the manuscript for Nightborn.

I tend to make therapists cry, so I decided it would be more sensible to stop freaking out and do something to manage the disaster before it turned epic. I had to find a new editor for the trilogy; someone who could step in and handle a well-established universe of 13+ books, who would get me as a writer, and who would be enthusiastic about what I was doing. Aka the editor every writer wants. I also had to do this before I was shuffled off to another editor who might not be such a great match.

To cut to the chase, I did my research, put in my request, and was fortunate enough to be assigned to that editor. We've been a great match, and I can say with certainty that Nightborn would not be the novel it is without her.

Another author with a new title out in March is Jessa Slade, who has impressed me with her work since her debut novel in her Marked Souls series. Jessa is a wickedly talented storyteller who puts together the most absorbing characters and effortlessly brings them to life on the page. I also think she's one of the most original world-builders in the genre (and Jessa doesn't know this but her series is one of the main reasons I asked to be assigned to her editor.) To date my favorite Marked Souls book is Vowed in Shadows, but her March release Darkness Undone just landed on my doorstep yesterday, and from the first chapter I've read it looks like it might take the top spot. 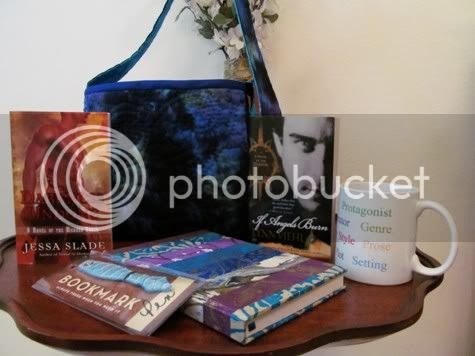 If you'd like to check out Jessa's latest, in comments to this post name an author who you think has mad skills as a storyteller by midnight EST on Saturday, March 10, 2012. I'll draw one name at random from everyone who participates and send the winner an unsigned copy of Darkness Undone by Jessa Slade, a signed copy of my very first Darkyn novel If Angels Burn, a hand-quilted fully reversible Light & Darkness book tote (designed and handmade by yours truly; here's a shot with the reverse side showing), a blue crystal bookmark pen, an eco-friendly blank journal, a writer's words mug from Author Outfitters and some other goodies. This giveaway is open to everyone on the planet, even if you've won something here at PBW in the past.
Posted by the author at 12:00 PM