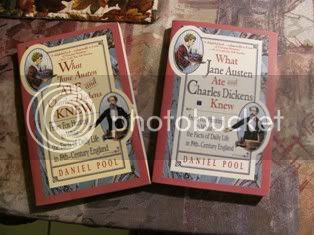 Daniel Pool's What Jane Austen Ate and Charles Dickens Knew is one of my favorite nonfic reference books, as it's written to inform but delivers the facts in a friendly, completely readable fashion. It's not just for writers, either; I think what daily life was really like in 19th century England is universally fascinating.

Today while rearranging some shelves I also discovered that I have two copies of the book (I'm pretty sure the extra was a gift from a friend.) While I'm very tempted to keep the spare -- I know eventually I'll read mine to pieces -- it's exactly the sort of book that begs to be passed along. Which means, you guessed it, a giveaway.

If you'd like a chance to win, in comments to this post name a reference, nonfic or how-to title that you've found particularly helpful (or if you can't think of any, just toss your name in the hat) by midnight EST tonight, October 29, 2011. I will draw one name at random from everyone who participates and send the winner my extra unsigned trade paperback copy of What Jane Austen Ate and Charles Dickens Knew by Daniel Pool, along with a surprise. This giveaway is open to everyone on the planet, even if you've won something here at PBW in the past.
Posted by the author at 12:00 AM