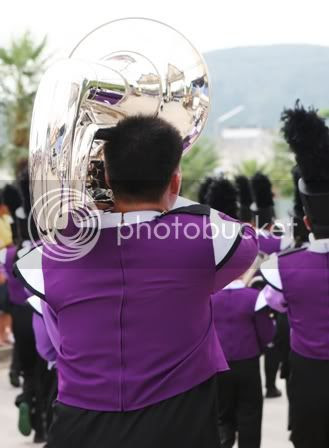 Last week we went out of town to a band competition to see the high school kid perform, but didn't find the place until her band was already on the field. We got inside in time to see the performance from about half a football field away, but when I looked out I saw my kid playing a standard flute, which was the wrong instrument (for band she plays the picolo, which is a tiny version of the flute.)

I told him that no, he was wrong, and started taking pictures. Throughout the entire performance I snapped shots of this girl while he told me I was mistaken. I insisted I was right. Finally he admitted he couldn't tell which child was ours because to him they all look alike in their uniforms.

After the show we caught up with my daughter, and I asked her why she'd been playing the flute. Turned out she'd lent her picolo to her section leader, who had accidentally left hers behind and had a more difficult musical part to play (and my daughter had studied the parts for picolo and flute, so she could switch to a spare flute on hand at the performance with no problem.)

Later my guy asked how I had been so sure that the girl with the wrong instrument had been our daughter. One is always tempted to claim maternal privilege, aka "a mother always recognizes her child", but I don't think recognition is always instinctive (even for moms.)

Instead, I relied on what I know about my kid. For example, I've seen this show lots of times so I know her exact position on the field. While her helmet covers her hair and shadows her eyes, and most of the girls in her section do look alike in uniform, I spotted the shape of her ear (which she inherited from her dad) and her mouth (which she inherited from her aunt.) She's very serious about marching, so she never slouches or fidgets, and she always holds her instrument in the correct position. Finally, I zeroed in on her movements, and while she was perfectly in step with everyone else, I knew it was her by the way she looks when she moves.

Now, Back to the Mountain

Yesterday I introduced you to the mountain of work that is writing a novel and talked about starting your climb. Today we're going to look at who you're taking up with you -- the imaginary friends of any storyteller, also known as your cast of characters.

You'll often hear writers talk about their characters as if they are real, living, breathing people. They have conversations with their characters, listen to them, believe in them, cheer them on, take their advice and even go shopping for them. This is of course a lovely fantasy, and one of the primary reasons people think writers are so strange.

Yes, I know for a fact that my characters are not real, but to me, they have to be as close as possible to real, living, breathing people in order for me to write them. So I do odd things like sketch them and play songs for them. I write poetry for them. I visit the places where I want them to live or work or find themselves handcuffed to a naked stranger (about whom I know everything, too.) I give them birth dates and bad habits and big problems. I know what they love, what they hate, what annoys them, what they want, what they don't want, what they think they want. And yes, occasionally I hear them talking to me in my head.

It comes down to this: the more I know about the admittedly imaginary people who are going up the mountain with me, the better and faster I climb. Since I don't like to dawdle, I pretty much try to know everything about them before I start up. And what little I don't know, I will find out on the journey, because I'm annoying that way.

Who Do You Take with You?

When you're building a character the natural temptation is to make one that conforms to a popular archetype within your genre: the tall/dark/handsome romance hero, the tough tattooed urban fantasy chick, the strapping fantasy warrior, the girl-next-door freckled heroine, the Captain Kirk or Luke Skywalker SF protagonist, the vampire brotherhood musclebound dude. While there's nothing wrong with using an archetype -- some novelists have built very successful careers while writing the exact same cookie-cutter characters over and over -- there's nothing particularly memorable about them. To offer a character that your reader will remember, you need to craft a character who in some way stands out in a crowd.

Every writer has their own attitude about what needs to go into creating characters. My personal philosophy is this: if I'm going to spend weeks climbing a mountain with the same bunch of people every day, they can't be ordinary, shallow, two-dimensional interchangeable, nothing-special characters. They'll bore me off the mountain. I need unique, interesting, absorbing characters, not only to provide the reader with a great book but to keep me motivated while writing it, too.

As many of you know I begin all my characters by asking my infamous three questions: Who are you? What do you want? What's the worst thing I can do to you? For me, the answers have to be fascinating, thrilling, and definitely something I want to explore at length. Since I'm doing the asking and the answering, that also means putting everything I've got, all my writing mojo into the character construct.

For NaNoWriMo, you're going to be spending a solid month with your characters. You don't have to use my three questions; make up your own -- or use another method to build your characters that works better for you (see the links below for some interesting alternative approaches.) But once you feel you've built your character, ask yourself this: If they were standing among a big group of other characters, all dressed alike, and you were half a football field away, could you spot them? How? Answer that question in enough different, interesting ways, and you will probably know your character well enough to write them for thirty days.

What problems are you having with your creating characters? What methods do you use that help you build the best? Let us know in comments.

Also, from PBW: ABCharacter ~ Character Trading Cards ~ Know Thy Character Ten ~ The Complete Friday 20 Index, with lots of questions and my answers about characters.

Image Credit: © Gina Smith | Dreamstime.com
Posted by the author at 12:00 AM