Over the years I've collected or put together so many color-related swatches, charts, pamphlets, palettes and word lists that I decided to consolidate them in one reference notebook. That way the next time I need to describe a particular shade of white I can have all the whites I've saved in one place.

Color referencing in fiction can be tricky, as I think the writer's first tendency is to grab a cliche or relate something to food. Who hasn't read at least one story in which a frightened character went white as a sheet, or possessed flawless creamy-white skin? But we know this is really lazy writing, and we owe the reader a bit more originality and effort.

I started my notebook with white, which happens to be my color reference nemesis. I discovered how difficult it is to describe white when I made the eyes of my Jorenian characters in the StarDoc series that color -- and subsequently cursed myself for doing so for the next thirteen years. All my color references to white were contemporary, and here I was writing in a far future where 99% of them didn't exist. Anyway, most of the time I fell back on a blind-person analogy or the white-within-white thing. It was lame, and it's probably the reason I started collecting color references in the first place, to broaden my understanding of color as well as beef up my descriptive powers. 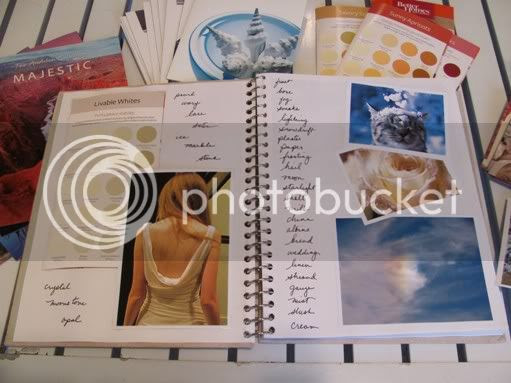 We all see and respond to color differently, so this kind of notebook is a great exercise in originality. You can put anything that inspires you in a color reference notebook; what you want is something that naturally stimulates your powers of description. I find combining paint charts and photos with word lists related to the color usually primes the well for me, but I also plan to use cover art, scanned images from my favorite magazines (Artful Blogging has tons of ladies who do the all-white decorating thing) as well as poems I associate with particular colors or palettes. Here's a page with Stopping by Woods on a Snowy Evening by Robert Frost, definitely my #1 white poem: 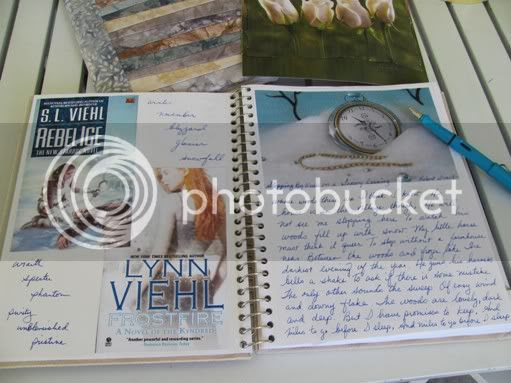 A color reference notebook is also a good storage encyclopedia for references you've already used in stories past. This can help prevent you from becoming that a descriptive repeater who in every book has a character with chocolate brown eyes or flaming red hair. Doesn't seem like it would be a problem, but wait until you've written twenty or thirty novels and suddenly you notice that every other guy character you write has laser-beam blue eyes.

What would you put in a color reference notebook to help jog your descriptive powers? Let us know in comments.

Related posts: Palettes with Color Names ~ Story Palettes ~ Character Palettes
Posted by the author at 12:00 AM