A Tale of Two Roses 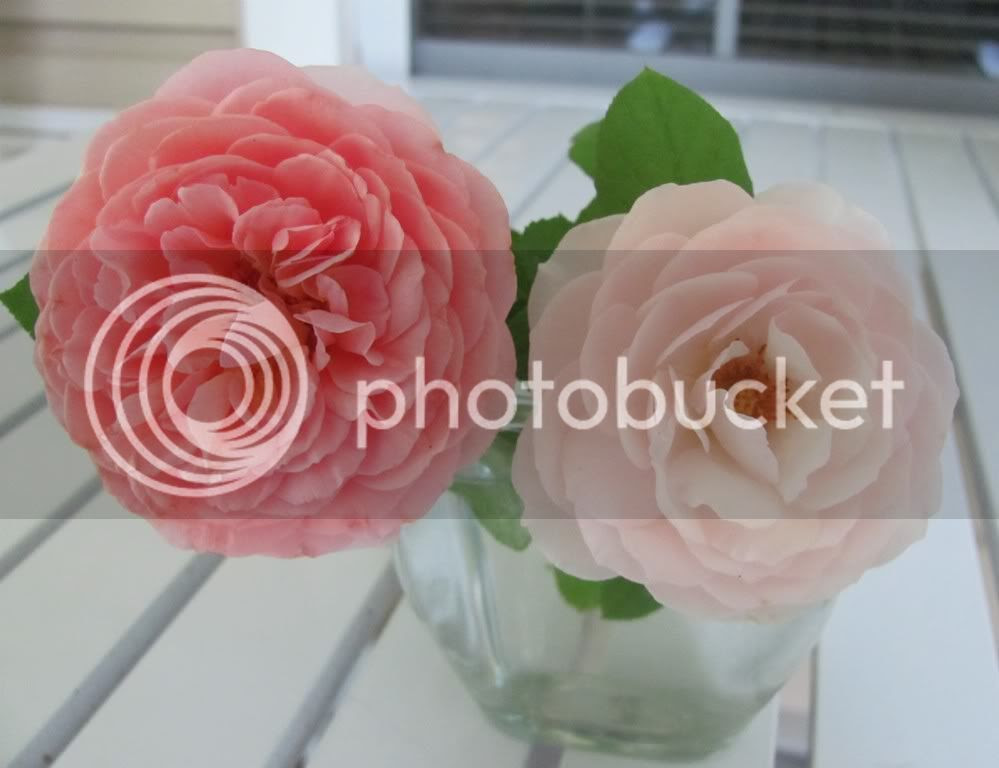 Hang around me long enough and I will tell you a story about my roses. It's inevitable; I'm a rose addict. I began growing them because I like to have fresh flowers in the house, and roses remind me of what happened on the day I fell in love with my guy. That's why they're my favorite flower -- and why our daughter's middle name is Rose.

Most people don't realize just how long roses have been cultivated. The Chinese were probably the first to add them to their flower beds about five thousand years ago, and they've been bedevilling gardeners ever since. The ancient Romans used them in perfumes and medicines, and showered rose petals on their armies as they paraded through the streets. Many cultures consider the rose a sacred symbol, and have used them to represent everything from love to war.

I read a couple of books last week that reminded me of two of the roses I grow, which prompted me to cut a bloom from each of them while I wrote this post. The image up top there are the two roses just after I cut them and put them in water. You might think at first glance that the showpiece of my garden is my lady rose on the right. She produces white flowers with just the faintest tinge of pink, and they are always perfect, from bud to bloom. Lady's roses have the classic rose scent, and she also has perfect leaves and a nice shape. She responds well to pruning and produces steadily right on schedule, from late spring to early fall. They all look just like this one: 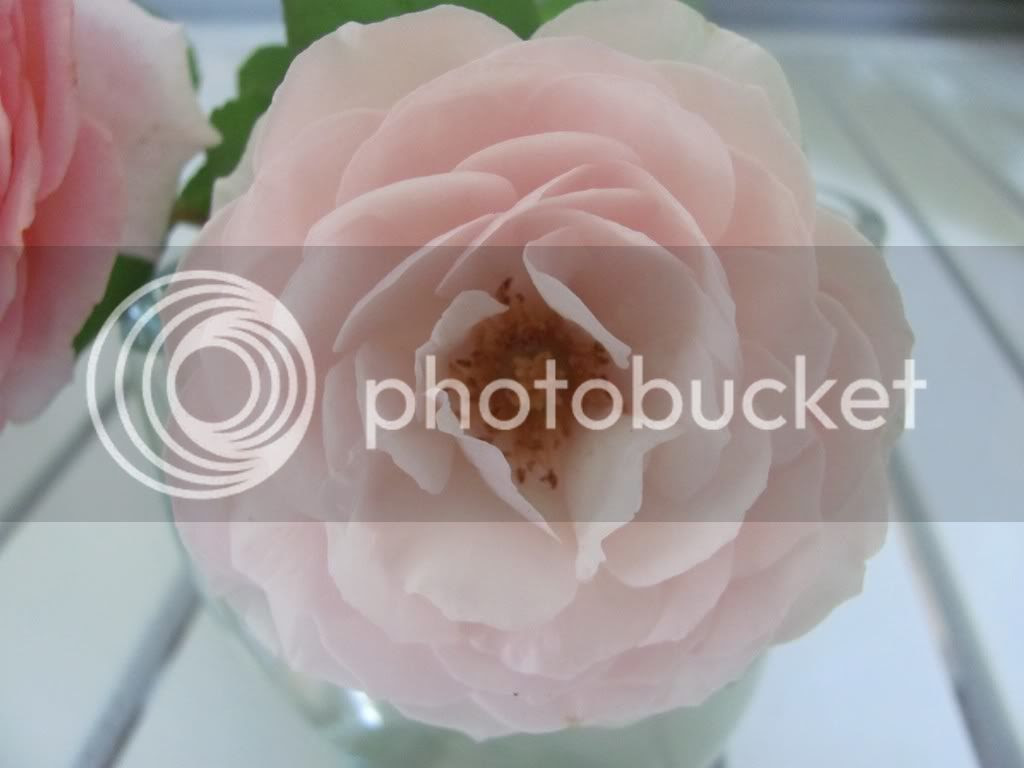 Then there is my cranky old rose bush, who is responsible for the dark pink bloom on the left. Cranky and I have a colorful history. She's pretended to die on me multiple times only to come back to life; I should really call her Zombie Rose. She also blooms whenever she feels like it; one year she gave me roses for three weeks in the middle of winter (that was right after the summer she got the black pox and spread it to every other bush in the garden.) I never know what to expect from her; one day she gives me a dozen blooms that all open at the same time; the next she turns into a brown stick and plays dead. 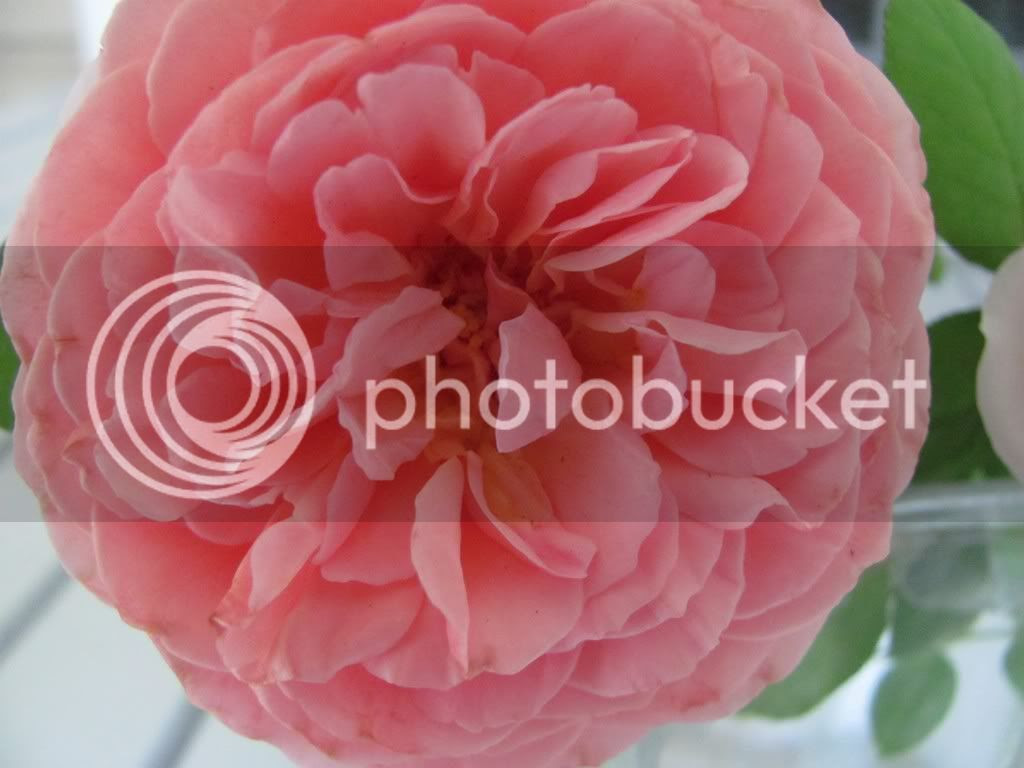 For an heirloom rose Cranky is old, ugly and she refuses to be cultivated, pruned or otherwise tamed. Her blooms don't smell like roses at all; they're a bit like baby powder plus cotton candy plus something else. They also look more like carnations than roses, and their crinkly petals will never win any beauty contests. Cranky spits on the word showpiece. I'm pretty sure she hates me, too, and I have the thorn scars to prove it.

I'd have kicked Cranky out of the garden years ago, except for the fact that (when she wants) she produces incredible, complex roses that seem to change color from year to year and last for more than a week after cutting. That and the fragrance of her blooms is like a drug (after one sniff you keep wanting to smell it, which is what gave me the idea for the Darkyn's l'attrait ability.)

I appreciate my lady rose, too, but for all her excellent qualities and endless perfection, she's really not much use to me. I can't cut any of her blooms because they fall apart immediately. Here are the two roses again, 12 hours after I cut them: 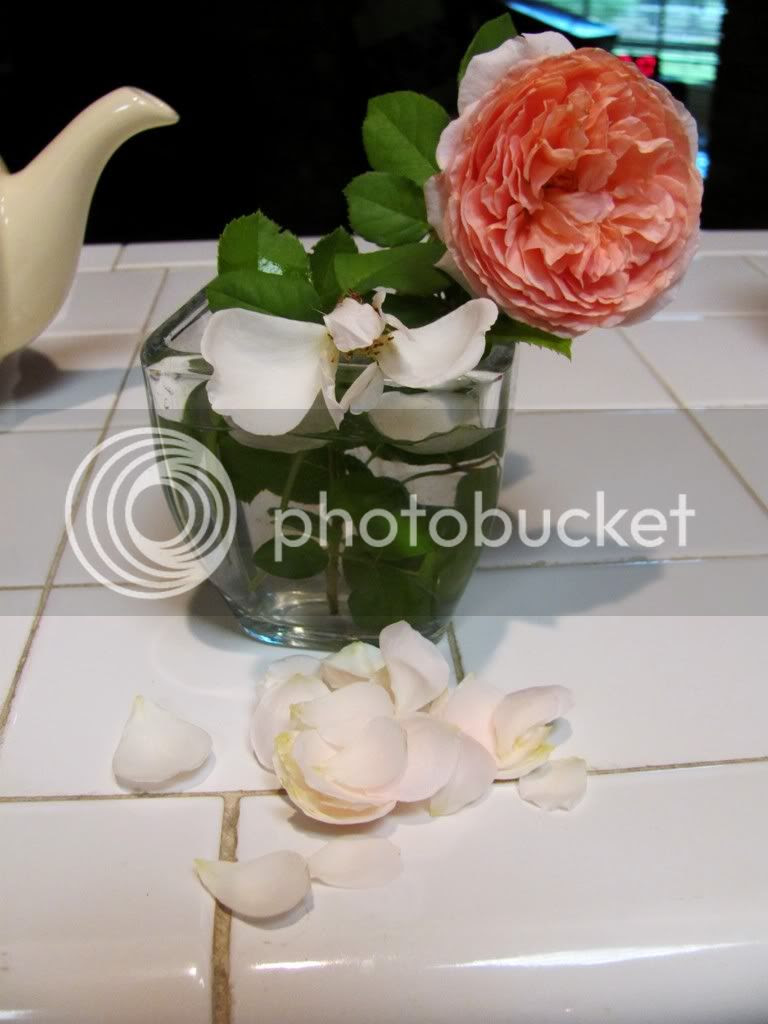 Now onto the books I read. Book #1 was by a writer who shall remain nameless (it's no one who visits here or knows me.) This writer is quite attractive, very popular, has won industry awards and is well spoken of by people who think all that stuff is important. These are also the reasons I've never read this writer, but a family member asked me if the writer's books were any good, so I thought I'd better actually read one and test the waters before I offered an opinion. While I was wading through the cloned characters, the knockoff worldbuilding, the pinhead plot, the endless housekeeping dialogue and sex scenes that read like Pilates instructions, I also realized how perfect this writer was. Technically speaking, I couldn't find a single thing wrong with the writing. The novel contained zero grammar mistakes, typos or broken genre rules. The writing also had no voice, no passion, nothing to distinguish it from a hundred others just like it. Reading it was like what I imagine eating library paste tastes like.

I read Book #2 a day after recovering from Book #1, and I was convinced I would hate it, too (#1 really left me in a hateful mood, which is probably why I went to another book I didn't want to read, to get all the suffering over with at once.) #2 was a Christmas gift from a friend across the pond; a literary novel set in a time period I don't especially care for. The main character was, God help me, a writer. There is no character that makes me cringe more that a fiction protagonist who is a writer. The title was waaaaay too long. The characters were poorly named. It wasn't even structured like a novel. But it was a gift from someone I care about, so I had to read it. Started out slow, but by the middle of the story I was on the edge of my seat, reading as fast as I could to find out what was going to happen next. The terribly-named characters stole my heart. So did the story, which wasn't like anything I'd ever read. It was brilliant stuff. I will remember this book forever (and once I get more copies, I'll tell you more and have a giveaway for it.)

When you're writing for publication, you will be pressured to deliver perfection. You'll be handed a lot of rules about what you should or shouldn't write. You'll have agents, editors and even writer friends give you advice on what you have to write to win awards, be more marketable, and appeal to the readers of other, better-selling writers. I don't think there's anything wrong with trying to improve the work, or to train yourself to turn in the cleanest manuscript that you can, but don't be bullied into sacrificing who you are as a storyteller so that you look better. Don't surrender what is unique about you just to be more acceptable. Pretty might look really good, but as my poor lady rose proves, it has no substance, no surprises, and it never lasts.
Posted by the author at 12:00 AM