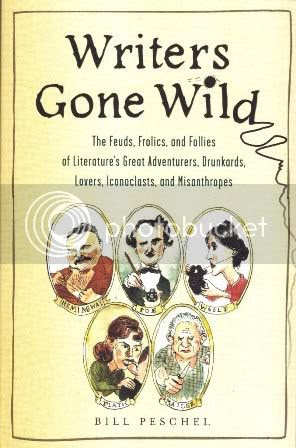 Bill Peschel and I have (virtually) known each other for a number of years, so I hope he forgives me for snatching up a copy of his debut book Writers Gone Wild when BAM put it out on the shelves a bit early. I couldn't help myself; it's a book about the great writers of our time. More specifically (and I'll quote here) "The Feuds, Frolics and Follies of Literature's Great Adventurers, Drunkards, Lovers, Iconoclasts, and Misanthropes."

Resist a book with that kind of subtitle? Are you kidding? I made a bowl of popcorn and sat down with it like the minute I got home from the bookstore.

The first two lines of the intro (George Bernard Shaw inspired this book. Particularly his condoms.) had me grinning. From there Bill relates how Shaw's other side inspired him to make the journey from idea to print. He also mentions how he views this compilation of 200 writer scandals, outrages and cautionary tales, both as illuminating and great fun. I have no doubt he'll get some flack for it from the literati's pedestal polishers, but I think what he's done with this project is worth it.

Bill's writing is as smooth as his wry, intelligent voice, and the result is an effortless read, but I expected nothing less. What I didn't anticipate was how much I didn't know about the Greats, such as Emily Brontë's (failed) attempt to be a teacher, or that Dorothy Parker had been targeted by the FBI. Norman Mailer's misogyny has always been fairly infamous, but for the first time I discovered why so many women writers spit whenever they hear his name.

Not every tale Bill tells is the stuff of great, shocking scandal; many were just plain laugh-out-loud funny, and a few were truly inspiring. I was never aware that Samuel Beckett secretly joined the French Resistance during WWII, and was decorated for his efforts to fight the Nazis. Nor did I have a clue that E.B. White had to endure censorship and a vicious, meddling critic who wanted to ban the much-loved Stuart Little before it was even published. Even little incidents, like the time Katherine Mansfield defended D.H. Lawrence by snatching his book from a jerk who was making fun of it in public, opened my eyes to the real people behind the famous names.

I came away from reading Writers Gone Wild with a better appreciation for the writers who came before us, not as literary greats but as real, flawed, often likeable human beings. I will admit to some satisfaction over a few scandals (I happily crowed over the tale of Joseph Conrad, page 71-72; this because I've hated him since high school) as well as some pangs of sadness (too many brilliant writer minds and lives have been destroyed by alcohol and substance abuse.) More than anything, though, reading this book made me feel a little wiser. I don't think we're doomed to repeat the mistakes of the past as long as we learn from them and take a different path to create healthy, happier writing lives for ourselves.

And it was great fun to read. Bill Peschel really delivered on that promise.

But as always, you don't have to take my word for it. In comments to this post, name a writer from any time with whom you would love to sit down and have coffee and chat (or if you'd rather hang out with non-writers, just toss your name in the hat) by midnight EST on Saturday, October 30, 2010. I'll draw five names at random from everyone who participates and send the winners an unsigned copy of Writers Gone Wild by Bill Peschel. This giveaway is open to everyone on the planet, even if you've won something at PBW in the past.
Posted by the author at 12:00 AM