Yesterday I talked about the three types of new story ideas that regularly bedevil me; today I'd like to tell you how I calmly and intelligently sort through new ideas, neatly categorize them and only use those that result in bestselling novels. And as soon as I figure out how to do all that, I'm sure I will.

New story ideas are the Viagra of writing; they make you feel like you can nail anything. Inevitably the feeling wears off and you're stuck with a lot of work you don't think you can do. Back when I was a youngster I had a million ideas, and whenever a new one hit me I'd drop everything and work on it. Until I had to stop and do a story for another, better new idea. And just as that one grew tiresome, yet another would whisk me away.

After building a depressing collection of a hundred or so story fragments and partial novels, I knew I had to stop idea-hopping or I'd never finish anything. So I made the vow: I will finish everything I write, and not start anything new until the story is complete. Only my new story ideas didn't go away; they began gathering and organizing and ambushing me. Soon every time I started writing I'd get hit by a barrage of new/better ideas.

Eventually I crumbled, stopped writing the story I was working on, and opened a new file. But by that time my vow had forced me into the habit of plotting and outlining my ideas before I started writing them. I decided to do the same thing with the new idea, only I didn't plot out an entire story. Instead I wrote a brief outline of just the idea itself.

I still felt torn; it's hard to resist something that bright/shiny/new. But: outlining the new idea preserved it, and dispelled my anxiety over losing it to the abyss of Stories Forgotten. That allowed me to return my focus to my current project. There was another side effect, one that didn't become apparent right away: over time the idea I put aside got better.

To illustrate, here is one of my more recent new story ideas: to inherit millions, you have to spend a week in a haunted house. It was such a dinky, run-of-the-mill idea that I ignored it, until two young female voices popped into my head. They wanted to chat about it. And they wanted me to listen. While I was trying to update my business ledger.

Their names were Lucy-Something and Something-Taylor. They were also bestest friends, the sort who honestly believe they are, which made me think if I wrote them I'd have to kill off one of them like immediately. This evil thought did not discourage them or the images that began flashing around them: a reading of a will, a decaying, haunted chateau, and a rather delicious-looking veggie pita. 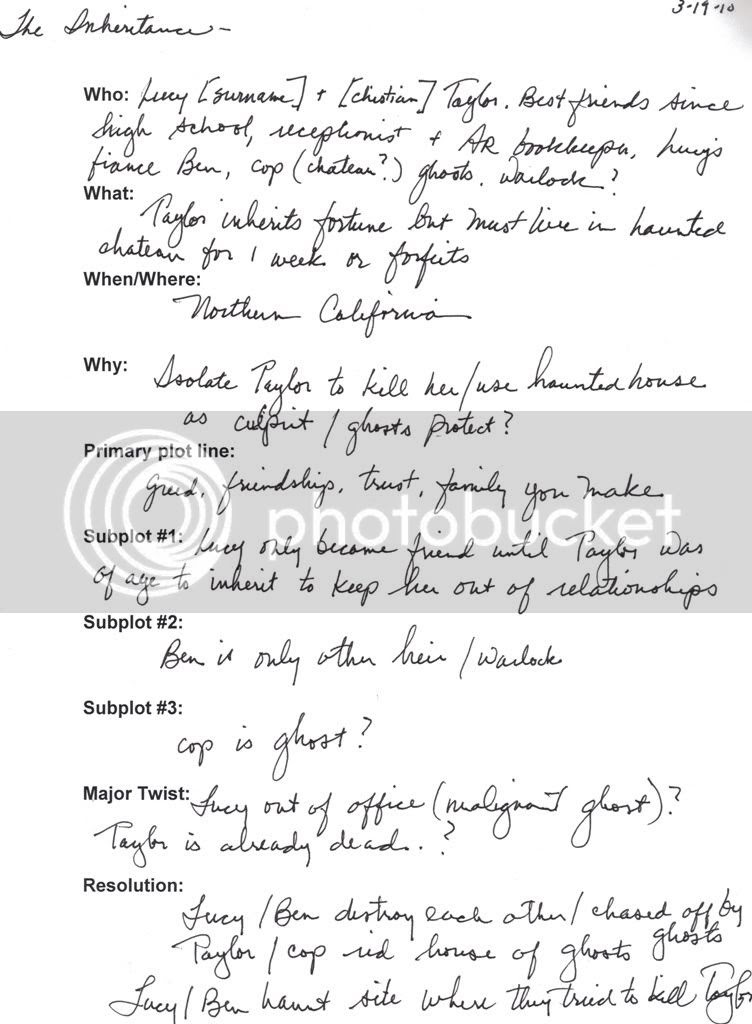 I think it was the chateau that did me in. Or maybe the pita. Anyway, I put aside the ledger, pulled out a plotting template and addressed my twin mosquitoes: All right, you two. You've got ten minutes. What?

It's like being a reporter live on scene, only you don't have to wear makeup, pantyhose or helmet hair. They started over while I listened and jotted down everything on the page (see my lousy handwriting on the left here.) And sure enough, when the ten minutes were up I had a decent one-page outline, a list of ideas and questions to jog my memory when I read it again, and a couple of potential directions in which to take it. I gave it a temp title (The Inheritance) and filed it away in my idea folder, and then I caved in a bit more and wrote out a couple pages of dialogue (the unaltered rough draft of which you can read here.) Lucy and her pal finally shut up, and I went back to crunching my numbers.

Flash forward a couple months to this week. I was talking with a friend about NaNoWriMo and and how I wanted to do something new and completely different this year. The friend (who is used to these conversations) asked what I haven't done yet, and with Halloween already on my mind I said a haunted house story. I love really good haunted house books, the twistier the better. Since I don't personally believe in most of that stuff, writing my own so that it was plausible enough for me while giving it a completely new spin would also be extremely tough, aka a true writing challenge.

I rambled on with some bits and pieces of haunted house/ghost story ideas I've had floating around in my head forever, and she (patiently) listened and gave me feedback. By the time the conversation ended I had worked out what I wanted, just not the who or the why. Also among those bits and pieces were Lucy-Something and Something-Taylor, who I'd thought of occasionally since outlining their idea. They'd had a few months to percolate a bit, so they had more to say to me this time around. A lot more.

All the free-floating stuff in my head began to fall into place to build a haunted chateau. While I made the salad for dinner (and made a note to buy more pitas) I was also building a story outline of my dinky mosquito idea, which now seemed much bigger and faster and scarier. Later I pulled my old outline and the dialogue pages from the idea file, shuffled the story concept around a bit until I began to see the who and the why of it. A train whistle went off, and then it arrived: a big, wonderful who; a dazzler of a why.

If I had started writing the idea back when it first hit me, I probably would have turned out a nice little short story. Dinky, run-of-the-mill, nothing special. Time, thought and serendipity had turned my buzzing little annoyance into a huge steaming iron horse of a story, one I think is going to make a terrific novel.

Related Links (freeware caution: always scan free downloads of anything for bugs and other threats before dumping the programs into your hard drive):

Text Block Writer is "a virtual index card program for writers. It can be used to organize research papers, articles, fiction, non-fiction, books and whatever related to writing. It is intended for people like me who use paper index cards to write all the notes and pieces of an essay, and then arrange the pieces and then use that to type them into the computer. With this program, you can type in the notes and arrange them on the computer, and then export them to an rtf document (that can be opened in word, open office, or just about any other word processor)" (OS: Windows; designer notes "This program requires version 2.0 of the .NET framework.")

Image credit: © Christian Lagereek. Fahraeus | Dreamstime.com
Posted by the author at 12:00 AM