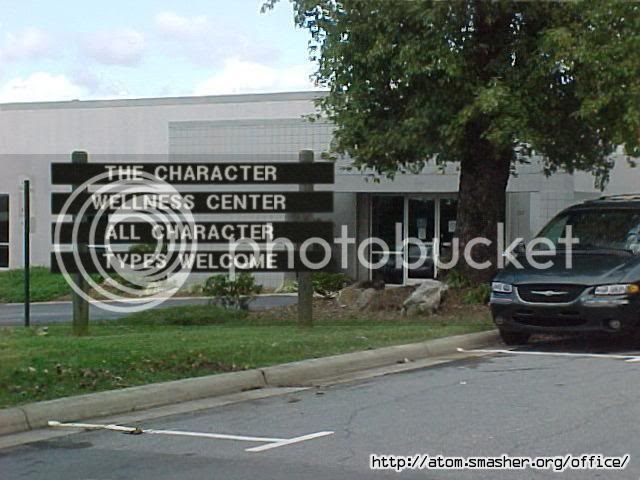 Authors, are your protagonists not in pain? Do your villains suffer from compulsive kindness? What about those sidekicks who simply refuse to be be supportive?

Here's just a small sample of some of our critically-acclaimed programs:

Sure he's big, strong, grim, silent and carries more weapons under that leather jacket than a battalion of Green Berets, but why? If your answer is "no reason in particular" then your hero needs to acquire some significant backstory in emotional anguish -- which we're happy to provide. Treatment plans include addition of dysfunctional families, endurance of ill-fated first love affairs, youthful inability to thwart horrific events, and the classic Best Friend Boinked the Fiancee scenario.

If you've ever stranded your main characters alone in remote, abandoned farmhouse during a white-out blizzard and they've still refused to speak to each other, we can provide conversational therapy topical options such as "My Deepest Darkest Childhood Trauma" "Why I've Had Only Cheap, Meaningless Sex Until I Nailed You" and "The Worst Thing I Ever Ever Did But For Which I Had An Utterly Redeeming Motive."

Everyone says they want beta heroes, but it's hard to pump up an emasculated quivering wimp enough to really impress the ladies. Through this program we will teach your dishrag to evolve into the thoughtful, quiet warrior who can and will slaughter hundreds in defense of his lady before returning to the castle to bathe and kiss her pretty feet while he apologizes for his lapse into brutality.

How to Live Happily Ever After

Your characters are damaged, suspicious, depressed people who have inexplicably fallen in love with each other in thirty-two hours: now what? Our hypnotherapeutic sessions will induce in your unlikely couple an appropriate fairytale state of unnatural euphoria, cement mindless commitment and assure your characters will exist in virtual uninterrupted Nirvana for the rest of their natural lives (or, for series characters, until the next sequel.)

He's a career assassin; she's a cop who has been hiding his secret baby at her mother's place for the last three years. In real life they'd probably shoot each other, but as characters we can help them get through this painful revelatory period by inventing plausible explanations and/or super-secret identities to justify any surprising dark secret that threatens to tear them apart (i.e. he's a secret assassin but works deep undercover for the CIA; she's a cop who has left the baby with her mother and faked that APB in order to search for him for three years.)

Unlocking the Door on Sex Scenes

Birds do it, bees do it, and your characters can, too -- right out in the open. We can help your shyest characters develop the perfect setting, dialogue and action to explore their most intimate moments without fear of inadequate performance or euphemism-riddled stuttering through the introduction of playful food items, hormonally-charged passionate arguments and even the archetypal "Kisses Gone Wild" progression (virginity loss scenes require a mandatory workshop on location and duration of the female hymen.)

We also have a wide selection of half-day specialty seminars for secondary characters, which include:

Being Funny in Five Lines or Less

Don't Hurt Your Relationships with the Main Characters; Insult Intelligently

Securing Your Story Position (and Potential Sequel Appearance) Through Subplots

You're Supposed to be the Heroine's Best Friend, So Why Aren't You Acting Like One?

Your characters are as important to us as they are to your story, so why wait for trouble to happen while you're writing them? Be preemptive and avoid massive editor-requested revisions by making an appointment with The Character Wellness Center today (all major credit cards accepted; endorsed by all major writer organizations that didn't ask for a fee.)
Posted by the author at 12:00 AM