The Secret of Everything . . .

. . . wouldn't be much of a secret if I told you, now, would it? No. Then it would be the Expose of Everything. The Tell-All of the Total. The Up front, In Your Face Entirety of the Enchilada. So I must tread carefully here.

A secret is a tantalizing thing, especially as almost everyone has at least one. But when along with it you invoke the sacred summa summarum, you take it to another level. Who doesn't want to know the secret of life, the secret of success, the secret of why the clothes drier eats only one sock instead of two? All you have to do is whisper the word secret and watch people's eyes light up. 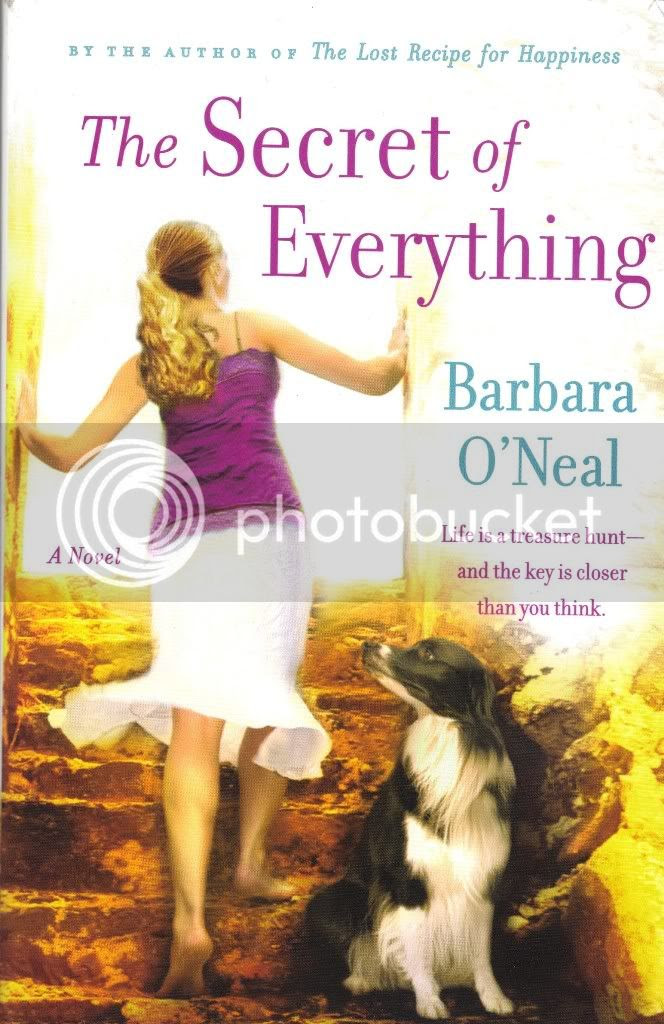 It's no mystery that I'm always searching for a great read, and my latest find is author Barbara O'Neal's new release, The Secret of Everything. This was my first read of 2010, and I went in with no expectations (frankly I was too tired when I started it to want more than something to keep me from rewriting chapter five in my head for the hundredth time.)

Although the story sounded interesting -- after a wretched tragedy, a wounded woman returns to her forgotten childhood home to find herself and maybe a little peace, only to recover memories of a mysterious past and a far older tragedy -- I didn't really feel like reading women's fiction. Lately I have no patience for all that touchy-feely pseudoliterary stuff; I'd rather read nonfiction. Or even man fiction. Give me a good political thriller with shallow but testosterone-oozing characters and some blithely evil technogenius who figures out how to blow up Congress with toner cartridges. And then let me watch it go boom. That's the kind of mood I'm in.

But I needed to read something better, in the same way an exhausted person needs some serious sack time, and Barbara's lovely, lyrical writing wooed me out of my rotten mood. To my surprise, it wasn't touchy-feely or pseudoanything at all. Then, on page 12, the story had me. And held me. And kept me. Page 12, have mercy. As a writer/reader I don't have time to waste. Nor do I want to get in touch with my inner weepy female. I mean, I'm working here. I don't play hard to get, I am hard to get.

But damn if she didn't get me. She lured me in with luscious descriptions and effortless but intricately layered characterizations, the haunting storyline and in particular this truly amazing big strapping incredibly sexy guy named Vince who makes every scene he has in the book a shivery delight to read (no offense to the heroine, who was terrific, but Mother of God, Vince is so real on the page you can almost feel his body heat radiating off it.)

Then she started with the recipes at the end of every chapter. Remember, I'm the daughter of a chef. I love food, and I love to read about food, especially now that I'm stuck on this cardio-healthy bark-and-twigs diet. Barbara's recipes were magic -- real food, great ingredients, beyond tempting. No squirrel food! As for my inner weepy female, I admit, there were a few times my eyes started to sting while I imagined the food from the story (and I am making Vita's orange cinnamon rolls from the story, the hell with my diet.)

Finally, there are the dogs in the story, and I don't want to say too much about them because they're something you should discover along with the story. It's just that I'm a dog lover, but I love real dogs, not the silly over-idealized anthropomorphic caricatures you encounter so often in novels. Well, Barbara writes them real.

This novel was the best possible kick-off for my reading year. It's the first time I've read anything by this author, but I think three minutes after I finished The Secret of Everything I was in the car on my way to BAM to get whatever else they had of Barbara's on the shelves (scored The Lost Recipe for Happiness) because I must have more. You see, however many secrets Barbara knows, the way to write a beautifully absorbing, honestly shining gem of a story is definitely one of them.

As always, you don't have to take my word for it. In comments to this post, name your first amazing read of 2010 (or if you haven't read anything that great yet, just toss your name in the hat) by midnight EST on Monday, January 18, 2010. I'll draw five names at random from everyone who participates, and send the winners an unsigned trade paperback copy of The Secret of Everything by Barbara O'Neal. This giveaway is open to everyone on the planet, even if you've won something here at PBW in the past.
Posted by the author at 12:00 AM

Labels: Giveaway, The Secret of Everything